As I followed a dotted line of orange tape into an old bathroom at New Haven’s Goffe Street Armory, Martial Chazallon’s voice flowed from a pair of earbuds into my ears, directing me to sit in a plush armchair and start to relax.

Sit down, he urged, the command softened in the thick webbing of his French accent. Place your hands on your knees. Back straight against your chair. Feet flat on the floor. Are you feeling the solidness of that floor through your shoes, your socks? Listen to your breath. Listen to the building.

Far from an involved, meditative game of “Simon Says,” this was the first step of Projet in Situ: La Ronde, a week-long audio tour-turned installation at the Armory.

A collaboration between French choreographers and installation artists Chazallon and Martin Chaput, the International Festival of Arts & Ideas, and City-Wide Open Studios, La Ronde fuses slick technology, architectural history, and a sort of Brechtian sensibility to bring New Haveners something quietly exhilarating, and totally in sync with this year’s CWOS theme of “Game On.”

The installation, for which participants should budget about 90 minutes, runs from Saturday through Oct. 16 at the Armory. Tickets are $15, or $10 for International Festivals of Arts & Ideas members. 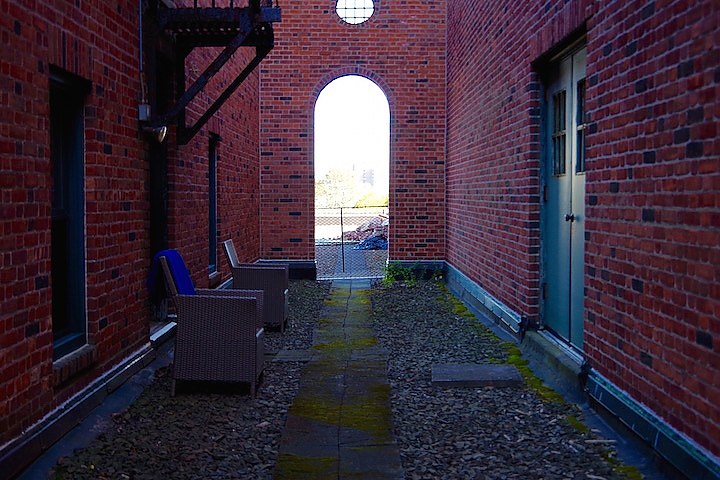 On its face, La Ronde is a sort of annotated audio tour of the space, an immense, echoey and dust-kissed building that once housed the Connecticut National Guard. Guided by a smartphone app that directs them to “Follow The Signage,” participants walk down hallways, up creaky staircases, past a few hairy dead spiders (only one on my orange route), and into rooms that look, for the most part, like they have been abandoned quickly, and are waiting for warm bodies to return to them.

In one, numbered coat hooks still jut out from the wall, glinting when they catch the light. In another, cracks run across the floor, causing its surface to buckle in the most glaring spaces. In a third, a dusty mirror catches participants off guard, their reflection so surprising on this solitary urban pilgrimage.

But they, in their communing with the Armory’s ghosts, are not completely alone — and that’s an integral part of La Ronde. A series of New Haven narrators, all artists and their children, pop on as participants step into orange, blue and green boxes on the floor, giving accounts of rooms, hallways, staircases and even a few mini-installations. Activated by a location-sensitive network of wires that have been strung up for the installation, these strike a balance of patient observation and stream-of-consciousness. In a second-floor room that looks like an old bar, young Roger crawls around the space, noting the holes in the sink, the faucets turned the wrong way, the way his body can fold into a cabinet near the floor. At the end of a hallway, a certain Julia notices the chipping paint and dust bunnies on the floor.

At first, they feel little silly. Embracing the voice in their earbuds, participants may have a moment of: wait, am I supposed to crouch down because the narrator is doing so? or Do I need to stand on this table too? or Should I be hiding myself in a cabinet? Chazallon and Chaput, as well as Arts & Ideas’ Director of Programming Chad Herzog, say that their La Ronde “gamers” or listeners can mimic the narrators as much or as little as they want to, but may find themselves wanting to quite a bit. Between the narrators’ words, after all, is a more interesting idea they must reckon with: I am a body in this once-loved space, this space with a large handful of past lives, this space that will eventually yield to another.

They have two options, neither of which are mutually exclusive: contemplate the transience of the Armory, and of themselves within it, or observe everything in minute and expansive detail, to know it that much better. To recognize in the space something that makes them, like the building’s hundreds of removed clocks once did, tick. 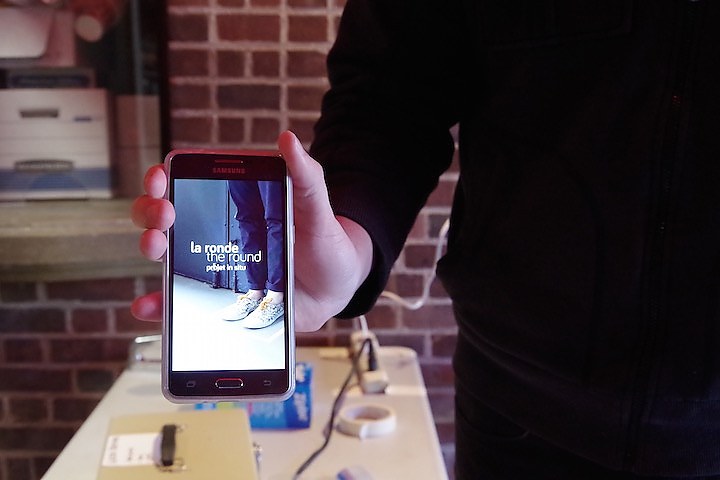 Which is the point. From its first directive to its last, La Ronde forces participants to slow down and disengage with technology. Yes—it requires a smartphone, but that part is provided by Projet In Situ, and participants’ phones are held hostage as a “deposit” at the door. With the temptation to check email, text friends and document the experience removed, navigating the space becomes an exercise in the depth of human observation.

Never will you have noticed the way spider webs hang, spooky and austere, between the curved, injured metal lips of steps. How paint chips upward, turning a dozen shades of red or grey as it does. The power that an old, water stained mural might have when you stumble on it unexpectedly. The sound that a single rumble of one’s stomach has in an empty room.

Or, in Chazallon’s final words: this is your space. All you need to add is the immensity of imagination.