Home Festival Blog Gospel Fest: Soul Stirring Music and the Woman Behind It All

Gospel Fest: Soul Stirring Music and the Woman Behind It All

Every community has its ray of light, its mother, the person to whom they look up to for faith and for hope, the New Haven community has Ms. Mae Gibson-Brown. This day she sits at a table captivating her audience, each one hanging onto every word she says, she’s a storyteller, co-founder of Salt & Pepper Gospel Singers, and the initiator of Gospel Fest taking place Friday, June 23 at 6:30pm on the New Haven Green .

A gospel concert extravaganza, Gospel Fest will feature many acts including the talents of: Mary Hicks, New of Pilgrims of Faith, Heavenly Stars, Morning Glory Theater Productions and a plethora of other acts ranging from spoken word and gospel rap to a gospel band handpicked by Brown.

“I’ve been asking since 2010, and nobody listened to me until now...I’m working as hard as I am with it hoping that this is going to be the end result: they’re going to say, ‘Gospel music on the green viable thing, let’s put it into our plans of what we’re going to do’” Brown said, “it’s not that a person can do the impossible, sometimes you just need someone to listen.”

While getting Gospel Fest off of the ground hasn’t been the easiest task, Brown hopes that now with a full-blown gospel concert, hope and faith can be restored in New Haven. Whether you love gospel music or have yet to take notice of it, Gospel Fest is being produced with that hope that the audience will take away the importance of showing faith through this soul stirring music. Gospel as Brown described, is contagious.

“It (gospel) meant a way of sharing what was important to me and who I am as a person, and the fact that I don’t have to pretend to be something to fit in. I think that with younger people, while they have not gone through the struggles that I have, certainly they have seen it, you see all the killings that went on for so long...there’s got to be hope for them. And for us...the hope is, I believe, in our faith.” 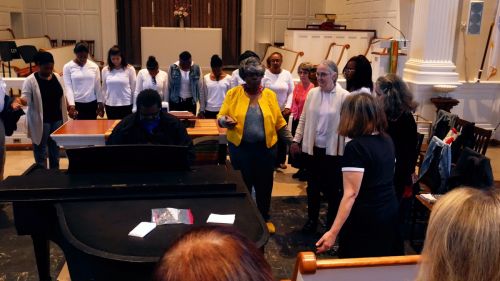 This year during Gospel Fest, the community will be honoring long time gospel trailblazer, Mary Atkinson Joyner, whose over 50 years of work in the gospel community will finally be recognized. Joyner, now 94, is known for promoting gospel groups dating back to the 1950s. Joyner gave local gospel artists opportunities for exposure, and hosted as well as fed the artists in her home.

Joyner’s relationship with Brown began in the early 1950s, from then a lifetime family friendship was formed. Now Brown is honoring her long time gospel companion with an award. “This lady has given so much to New Haven, and rarely do they give back.” Brown commented on why Joyner is being honored.

While Brown reflected on the needs for the community to give back to those who give so much, she selflessly did not mention herself once. Brown focuses heavily on the work of others, neglecting to admire her own incredible work for the New Haven community.

The Gibson (her maiden name) family held heavy ties in the New Haven area all of Brown’s life. There was a Gibson family in North Haven, West Haven and New Haven. Brown, apart of the West Virginia Gibsons would spend her teenage years in New Haven working in her family businesses. From then on, New Haven was in her soul. She and her husband were the first African Americans to have a food truck in New Haven and by selling hot dogs at the playing fields and the Yale Bowl they were able to put their children through college.

As a young girl in West Virginia, Brown’s father instilled in her the need for giving and selflessness. She recounted watching the neighborhood children play while she worked in her father’s garden. When the time to harvest came, Brown’s father would collect some crops and meat he butchered and leave them outside of their property for those who needed it. It was something she didn’t understand until she got older and began her own form of giving.

“I got here and I found myself doing some of the same things I used to complain about.” She began to reflect on her most selfless project, a shoebox project that would grow into something much bigger than she expected. It began with volunteering one Wednesday at a men’s halfway house as a singer, Brown found herself returning every Wednesday for the next 17 years. The boys began opening up to Brown as the center had hoped would happen. “After that second visit I felt like those men walked into my heart and took a seat without asking permission and I couldn’t stop going,” Brown said.

She saw the needs of these boys and one Christmas, she asked her gospel group Salt & Pepper to help her get together 200 sweaters that she then brought to the boys at the halfway house. Sweaters turned into sweaters and socks, into sweaters, socks and gloves then into sweaters, socks, gloves and a shoebox full of hygiene products. Brown spent Thanksgiving, Christmas, New Year’s Day and “the most important” Super Bowl Sunday cooking for the boys at the halfway house, but unfortunately, one day, Brown found out the house had closed down.

Instead of calling her mission quits then and there, Brown took her idea to the church she worshiped in at the time and in one year she went from producing 30 boxes to 100 boxes. This past Christmas, Brown and her team were able to produce and distribute 125 boxes to various shelters and locations in New Haven. Next year marks 30 years since she began this tradition.

Brown notes that a lot of what she’s done in recent years wouldn’t be possible without her true friend, Sheila Bonenberger, the salt to her pepper. Working in an interracial gospel choir, Salt & Pepper is something Brown is extremely proud of. According to Brown, with all of the racial tension building in society, gospel is something that can unite every race. It all boils down to faith. Salt & Pepper gives faith to many of its members and followers, it all started when a white woman (Bonenberger) asked an African American woman (Brown) to teach a white person how to sing black gospel music. The rest is history.

Gospel Fest is about the people and the community. It is a moment for the community to receive the gift of faith by giving support to a group of talented artists, led by a woman who gives so much to everyone she comes in contact with. “A long time ago, my mom taught me that you can’t go through life with two catchers mitts on your hands. You better take one off so you can throw something back.” Brown said.