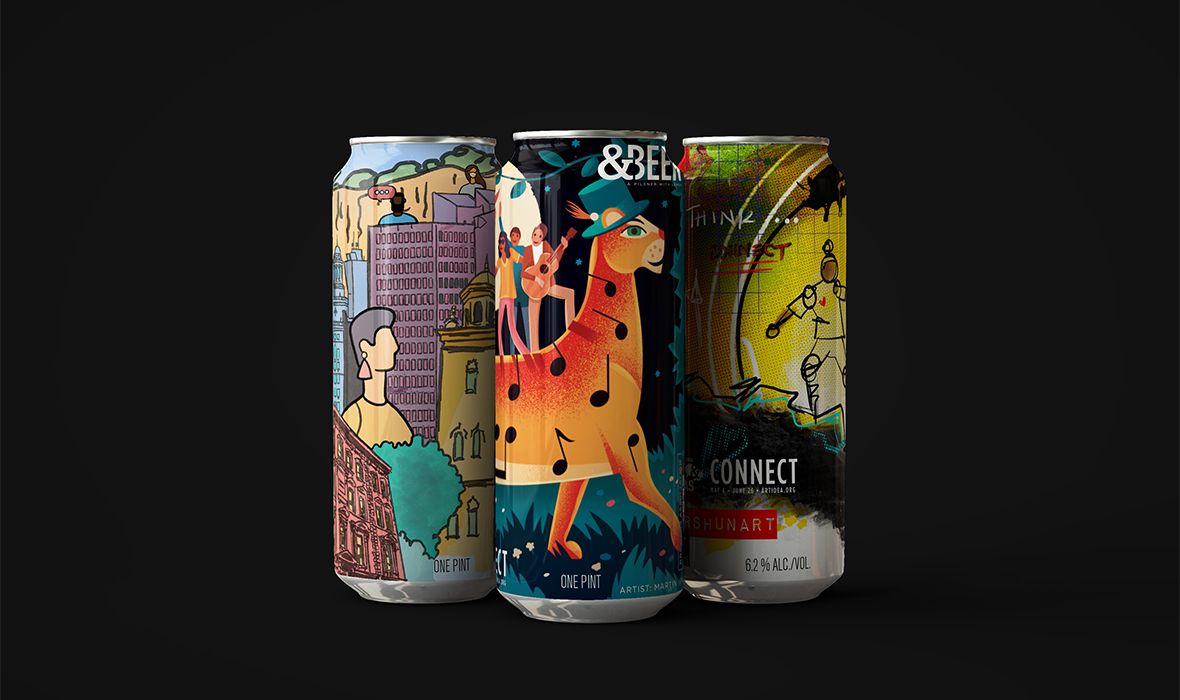 Celebrate in crisp, slightly hoppy style and be the first to sample the Festival’s limited edition beer, &Beer. At this party, you'll sip beer, enjoy some tasty food from local food trucks, and groove to the sweet all-vinyl DJ stylings of New Haven's own DJ Shaki. You'll also be able to meet the artists behind our labels, see their other works, and collect all three cans at partner restaurants throughout New Haven in June. Celebrate the Summer and beer best served with a side of Festival!

Shaki is Rick Omonte from New Haven, Connecticut. Perhaps best known for his role as bass player in the psychedelic groups Mountain Movers and Headroom, he was also responsible for the highly acclaimed weekly concert series Shaki Presents at BAR, which ran for 8 years.

Mr. Omonte is a co-founder of the art-book publication Ephemeroptera Quarterly, was an event organizer for Intercambio, and a resident DJ for the monthly Taco Party series.

When not organizing events at New Haven's legendary venue "Cafe Nine", or curating the soundtrack to your best moments, he can be found traveling near and far, maybe searching for rare records in Peru, or digging for vinyl in the maze-like souks of Morocco.

In 2019, the compilation album Puro Tayta Shanti was released on in-house label Discos Shaki (in conjunction with the esteemed Little Axe Records). An extensive deep dive into old Peruvian folkloric music, this 7 years-in-the-making research project was met with critical acclaim, and is currently on its second pressing. Compiled, researched, and licensed solely by Shaki, it is the first compilation of its kind to be published outside of Peru.

Recently, Shaki was invited to deejay in San Juan, Puerto Rico. He has also been a featured selector at DC's favorite party Ritmos Raros, as well as countless Latinx fundraisers and organizations throughout Connecticut. Every month, you can catch Shaki on-air at the long running community radio station WPKN 89.5fm, broadcasting from Bridgeport, Connecticut, and reaching the far corners of this world.

Black Hog Brewing started with the story of food, family, and a love for craft beer. Brothers Jason and Tom Sobocinski come from a Polish/Italian family where food and drink is always the focus of every gathering. From Jason’s wedding to his son’s birthdays, roasting a pig has become the favorite way to celebrate any special occasion. Tyler Jones, an old family friend and former brewer of The Portsmouth Brewery in New Hampshire, contacted Jason and Tom with a plan to move to New Haven so his wife and son could be closer to their family. With a plan in the works to form a brewery that would celebrate family and food, they needed to encompass all that they were passionate about. When they celebrate, they roast a hog and the Berkshire hog is the breed of choice, thus Black Hog brewing was born!