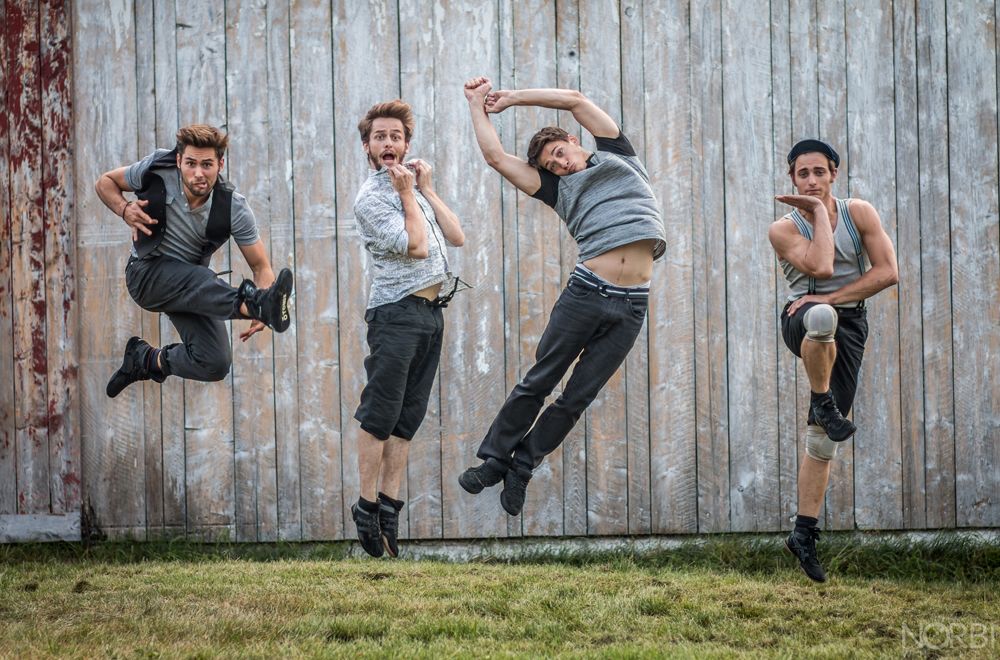 Mention circus to many people, and they might think of colorful tents and clowns. But a new type of theatrical circus has emerged: these shows take traditional circus acts like the see-saw, juggling, and high-flying stunts, and repackage them in a slick, more contemporary frame—without the circus animals.

Now comes Machine de Cirque, a brand new Québécois company under the direction of Vincent Dubé. The company’s first show brings together four exciting young acrobats, a versatile musician, an array of props, and even “machines” for a funny and heartfelt experience.

In between rehearsals for the company’s premiere in Quebec City in May, Dubé took a few moments to talk about circus in Quebec, the importance of story-telling in circus, and how a company of performers works together to create something exciting and new.

Montreal, and Quebec in general, has an incredible amount of new circus activity, the “nouveau cirque” as it is sometimes called. How did you form your company, and what makes your company unique?

VINCENT DUBÉ: A lot of modern circus right now is very polished, and I wanted Machine de Cirque to be very raw. We want the audience to see the personality of each artist and the mechanics of the show.

We integrate an on-stage musician very closely into the show—he is even included in the circus acts. For example, in the juggling act, he plays drums with clubs, and he throws and catches them while keeping the beat. It’s very fun and exciting. We’re exploring a unique use of the musician figure, and I think that will be part of our company’s signature going forward.

So the “machine” in Machine de Cirque has something to do with that engineering?

Yes! I like technology and engineering, and that’s what led us to that name. There are some machines in the show, but I also think that the name is great for us because the human being, especially the circus artist, is such an amazing machine. If you try to create a mechanical machine as precise as some of the human athletes we have, it will never be as exact. These performers are really amazing.

How did the company come together, and why did you want to make a new company?

I started as a performer, but I had also started directing a bit, doing variety shows and things like that in Germany. After awhile, I felt that I was ready to direct my own show and company. I had also studied engineering as a student, so I also had the idea to use my engineering studies in my artistic work. In 2013, I did a session of research and creation with a few performers who are still with the show: Raphaël Dubé, Yohann Trépanier and Fred Lebrasseur. In 2013 we did a little presentation from that research, which went well.

The other two performers in your group previously performed with Les 7 doigts de la main in Sequence 8, which was a very popular show at the Festival in 2013.

The guys I worked with on Machine de Cirque in 2013 were friends with Maxim Laurin and Ugo Dario, who were in Sequence 8, and they all had always wanted to work together. When I was ready to start creating this complete version of the show, they wanted to come and join the other guys who were already in this project. So the timing was just perfect, and we got along very well.

What makes a good company of performers and artists? Was there a common desire that united all of you?

Each of us likes to explore different ways of using circus skills and going beyond the norm in presenting them to the audience. We all like to include comedy in what we do. The show is not all comedy, but has many comedic bits. Also, we all like to do many different things, different acts, different acrobatics, even things in which we’re not specifically trained. So that makes it really fun to work together.

What is the show about, and how did you make it?

The characters in the show are stuck on their own in a post-apocalyptic world. They find some raw material and use it to build a big machine, which they want to use to try to communicate with other people. During the show, we see them work on the machine until at some point they realize that they had been so focused on trying to find other people that they didn’t notice they had been together the entire time—they realize what they have instead of what they don’t have.

Did the group collectively devise it?

I like to call it “collective creation with direction.” I wrote the main story line first, and then I asked the company members for their ideas. The story has been changed and adapted with their input, with what they think, and what they want to perform.

Your mention of “story” makes me wonder: do you see this as theater?

It’s a mix, really. There is a story line: we try to bring meaning to each act, have reasons why we are at certain places on stage, and know why we go from one point to another. The audience might not see all of that right away, but we know these reasons for ourselves and it keeps the show going.

Where do the circus acrobatics come in?

The acrobatic performance brings the sense of risk that’s so important to circus. We go to circus because we want to wonder, “Will the acrobats land on their feet? Will the juggler catch everything? If they do that towel act [that went viral on YouTube with company members Raphaël and Yohann], will the towel fall?”

Every situation in the show, even with the acting and all the theatrical elements, is all about risk, tension, and release of tension. We use theater and stories, but it’s built on risk-taking that is the basis of circus and acrobatics.

I have been working in circus for a long time and I have seen amazing acts, but I think you need that little extra. When I believe in the characters and the situation on stage, I feel that I am really connected with the artist performing. But when I don’t believe in the situation or what is going on, I don’t care as much about what is happening, no matter what the acrobat or the juggler does.

Also I wanted to say something unique. Part of this show is about addressing stereotypes about relationships between men, but we have fun with it. The show is about five guys stuck together for a very long time; they become very close friends in a way that’s not stereotypically what you’d see, and I think it’s very nice. In every part of the show, whether funny or sad, we work deeply with every emotion, and I think people will enjoy that.

I’m blessed because I work with great performers who can act and are also skilled acrobats. It’s very important to present them in a way that will grab the audience’s attention and make the whole situation feel real to them.

What would you say to an audience to prepare them for your show?

I don’t think they need help to enjoy it! Just come to see a great bunch of performers having fun and getting into trouble. I think we’ve approached this well and made a great show.

—by Alexandra Ripp and Art Priromprintr

Machine de Cirque plays at the International Festival of Arts & Ideas from June 23 to 27. Click for tickets and more information!

This original article will be published in the Festival's Program Book in June 2015: make sure to pick up your copy at the Festival! (c) International Festival of Arts & Ideas, 2015. All rights reserved.
News
Circus
Family
My account
Cart