In Taylor Mac’s ambitious, ongoing series A 24-Decade History of Popular Music, he explores the popular music and social context of each decade in American history, starting with the 1770s. Each decade is represented by its concert, debuted one by one over a period of several years. When the entire cycle is complete in 2016, all 24 decades will be performed in a single marathon event.

The 1990s will premiere in New Haven at the International Festival of Arts & Ideas on June 12 and 13. Commissioned by the Festival to celebrate its founding decade, the work will feature Taylor’s unique blend of commentary, song, and, of course, fantastic costumes from collaborator Machine Dazzle. 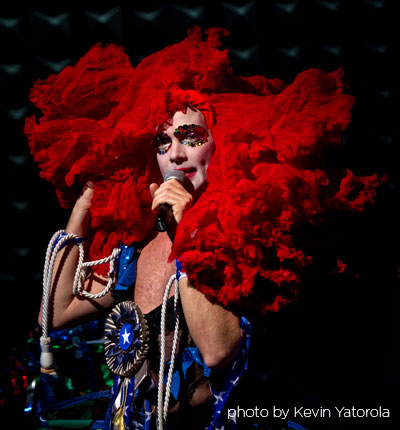 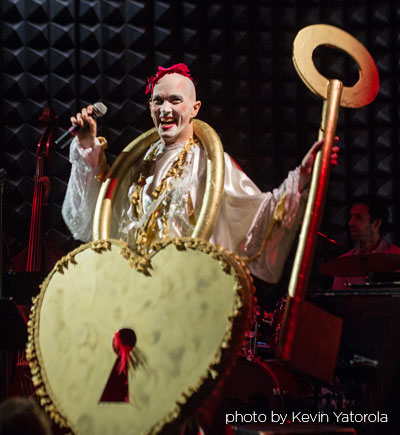 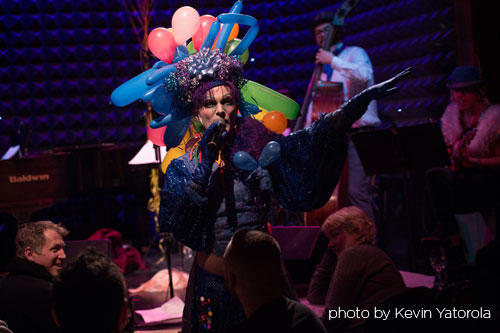 Artist and theater-maker Taylor Mac talks to Deborah A. Brothers about performance, costumes, and revealing the truth to audiences

Be prepared to be amazed. In his award-winning theater and performance-art works, Taylor Mac takes us on a fantastical journey, telling us truths that we have forgotten. He comes to the theater, Taylor said in a recent conversation, to “remind the audience of the dismissed or the buried within them,” of ideas that have been forgotten.

To do this, Taylor has readapted an ancient role: he has become the modern version of a court jester, a fool. “Everyone laughs and has a good time and the king doesn’t go to war,” Taylor says, because a fool must “say what everyone knows is true.” His performance is an entry into burlesque, drag costume, art, politics, and social change.

Designer and artist Machine Dazzle is Taylor’s frequent and fabulous costume collaborator. There is a glitter-proof room at an armory where Machine Dazzle creates costumes for Taylor; in the early part of their collaborations, Taylor gave him guidelines about what the emotional goal of his performance and design might be. Now, there are no guidelines. The modern fool, according to Mac, has to be “the oddest person in the room.”

In A 24-Decade History of Popular Music, Machine Dazzle creates a costume for each decade, to illustrate a particular theme or to allow Taylor to accomplish what he needs. One of Machine’s creations frames Taylor in a flotilla of small helium-filled balloons, while his headdress is tied in sparkling blue ribbons, a cross between women’s hairstyles and a fabulous birthday present. Taylor’s face is painted in white with multiple lines of sequins, beginning a magical concoction of performer and costume.

Sometimes, their collaboration is about small details: Taylor and Machine Dazzle find a train on a skirt may be too long, or that a different color would be better for the next incarnation of a costume. Or even that a costume has to be larger in scale and silhouette because of the decade (and costume) that comes before it. Each piece contains “something to wow the audience, and to have heart and to tell the story,” says Mac.

But nothing is arbitrary. Everything is carefully researched, combining parody and joy and acid directness. For example, on the costume for The 1920s, there are PEZ candy dispensers as decorations. These dispensers were an invention in that particular decade: so while they seem out of place, these are an actual historic detail.

Taylor mostly performs in drag—as a man in woman’s clothing. This is both funny and aggressive: it allows Taylor to speak and act in ways that are not permitted in ordinary male dress. Taylor performs with transgressive freedom that permits us to laugh and then to question our laughter.

There will be feathers, glitter and sequins. There will be debris and art left for us when Taylor leaves the stage. As he and his fool confront us, he will try to make us remember the truths that we have hidden in ourselves. Taylor both allows and pushes us into laughter. And by his performance magic, hopefully, we can confront our prejudices and reveal, as Taylor says, “the dismissed and the buried” in all of us.

—by Deborah A. Brothers

Deborah A. Brothers is Costume Director and Lecturer in Theatre at Williams College in Williamstown, Massachusetts.