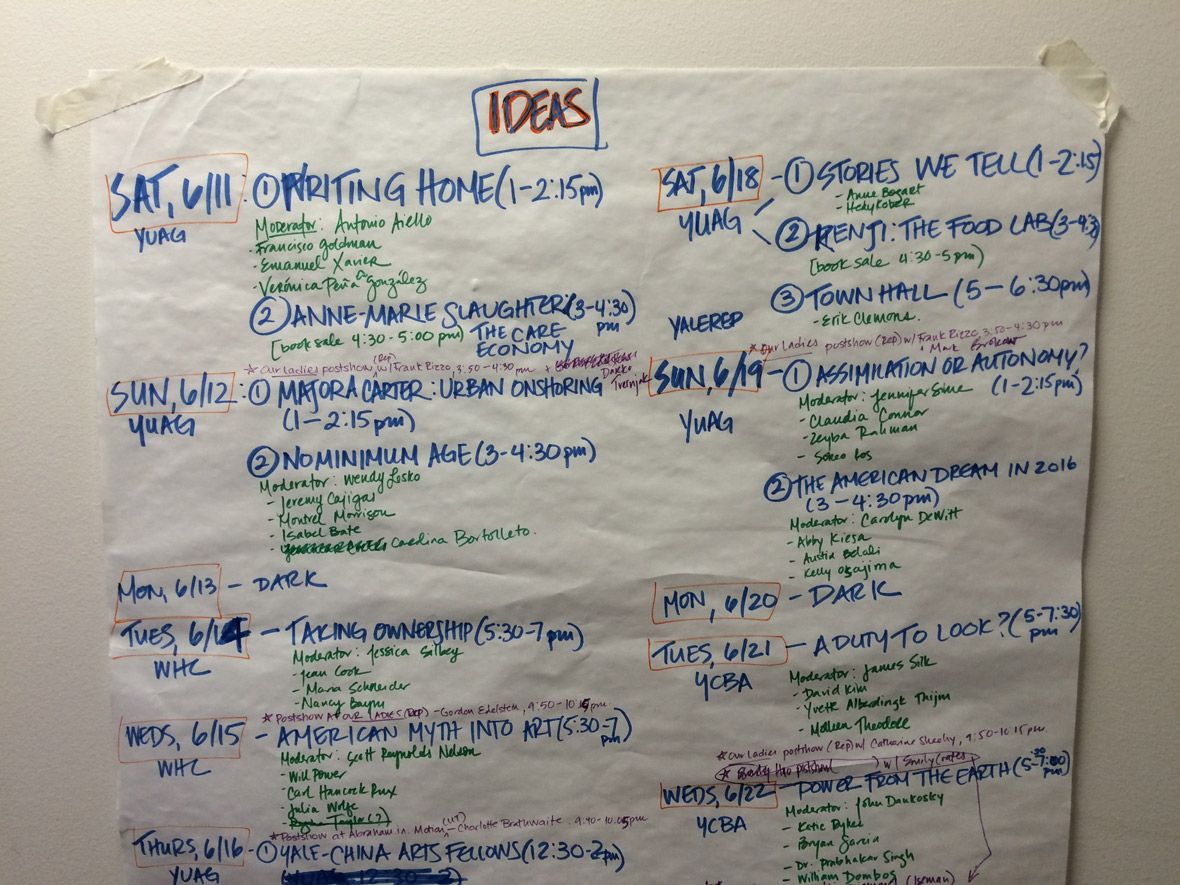 I’ve probably looked to the right 5,000 times in the last 6 months. Looked at this: my master Ideas schedule and roster taped to the wall of my office. This has been my Bible, my North Star, my ultimate guide. For many weeks, I have looked to this paper to remember what was when, who went where, what was missing, what came next. Now, days after the Festival has wrapped, I look at it differently. It no longer tells me of what is happening or what will happen, but reminds me what has been. With each glance, flashes of faces, bits of projected videos and images, and snatches of words from our twenty-two Ideas talks and panels spring unbidden into my mind. Here are some of them:

- Emanuel Xavier spinning intricate Spanglish poetry with humor and energy in his performance of his spoken word piece.
- Anne-Marie Slaughter nodding and listening to women asking her probing questions about life, work, and equity.
- Carolina Bortolleto of Connecticut Students for A Dream unfurling a huge protest banner.
- Maria Schneider’s face as she describes her discovery that she made $0 from sales of her first popular album.
- Will Power, Carl Hancock Rux, and Will Power laughing together as Carl tells stories of his grandmother.
- Cai Ying dancing face-to-face with her faculty mentor Emily Coates.
- Pico Iyer recalling meeting President Obama at a burger joint in Hawaii.
- The ethereal harmonies of the children’s choir from Yale Music in the Schools Initiative.
- Lily Yeh’s pictures of her transformative public art in a Kenyan shantytown.
- Friends and strangers sitting around a large table, trying to define “art.”
- Anne Bogart declaring, “In some ways I’m really dedicated to making theatre that would look ridiculous on film and television.”
- Kenji Lopez-Alt recounting how he improved french-fry cooking when he was working as a short-order cook.
- Festival Fellow Chance Weeks rapping at the Town Hall.
- Sokeo Ros tearing up as he described how dance saved him.
- The inter-generational dialogue between the American Dream in 2016 panelists and audience members.
- Yvette Alberdingk-Thijim’s powerful video about the ethics of digitally witnessing.
- Watching audience members swamp the panelists of Power from the Earth with questions after the event.
- Maleonn Ma’s little Makugee puppet saying hello to the audience.
- Dan Austin’s stunning photos of the recipients of bikes donated by his organization.
- Dan-El Padilla Peralta’s closing sentences on why academics and not just politicians have the power and the duty to combat social subjugation and discrimination.

Every time I look at the large sheet of paper, different memories spill into my consciousness, but today, these are the ones that surface. All of them make me deeply grateful for the speakers and audiences who made the Ideas series this summer all that it was.

From the Festival Staff
Ideas
Free
My account
Cart