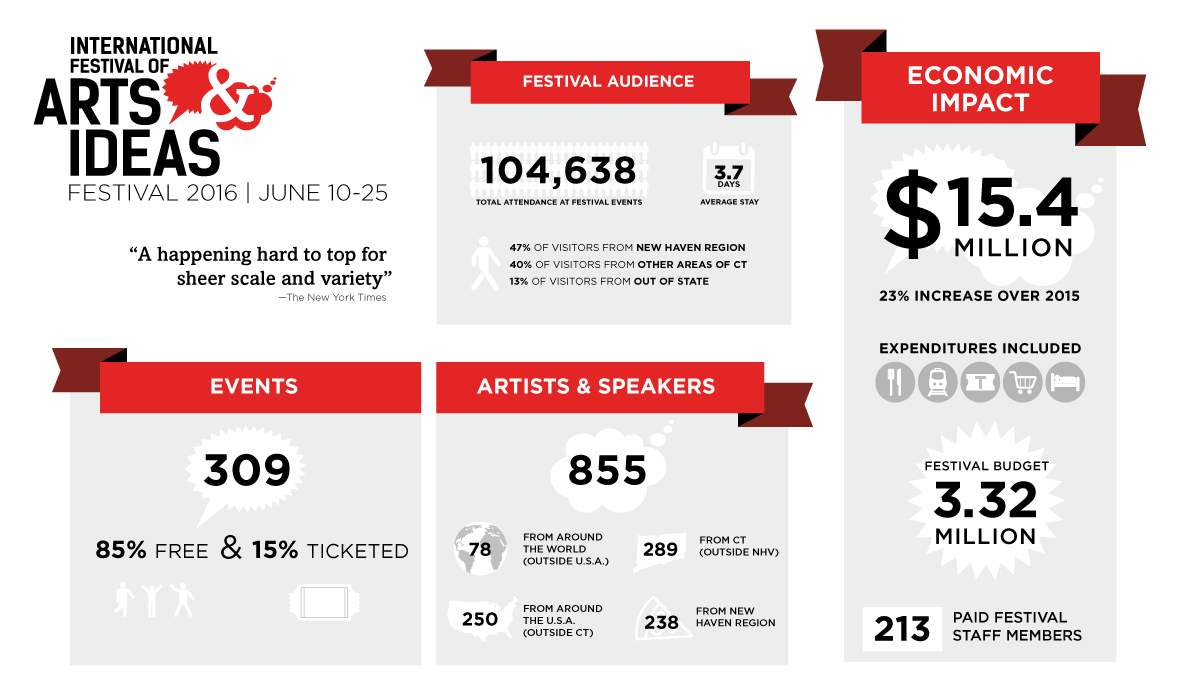 The International Festival of Arts & Ideas today announced the results of a highly successful Festival 21, which ran June 10–25 and generated an economic impact of more than $15.4 million according to an Economic Impact Study conducted by Quinnipiac University. This impact figure is an increase of 23% over the same study of last year’s Festival, which reported the same total attendance of over 100,000.

“We’re thrilled with the success of Festival 21 and proud to continue playing an active role in making our Connecticut community a vibrant, prosperous place,” said Executive Director Mary Lou Aleskie. “Audiences turned out in enthusiastic numbers for one of our most ambitious artistic programs in recent years, including a record number of world and American premieres in theatre, dance, and music. We welcomed a remarkable number of audience members who made their first visit to the Festival this year––and record numbers of visitors who traveled from beyond the Greater New Haven area and from out of state."

Economic impact was determined by analyzing attendance figures and reported visitor behavior with an in-depth survey of Festival attendees, along with analysis of attendance figures and ticket sales. Compared to other festivals in the United States, the Festival attracts more visitors and spending per capita over the 15-day Festival period. The Festival’s 170 events, more than 80% of which were free to the public, attracted 104,638 attendees. More than 7% of visitors reported that Festival 21 was their first trip to New Haven. Since 2014, attendance numbers reflect a 7% increase of Connecticut-based visitors from beyond the Greater New Haven area and nearly a 4% increase of visitors from out of state. Festival 21 visitors from beyond Connecticut comprised 13.1% of total attendance.

Visitor spending, combined with the Festival’s investment in jobs and local services necessary to produce the Festival, are generating further revenue for the state of Connecticut. The Economic Impact Survey reports nearly $1 million in additional sales tax revenue alone. Festival 21 employed a total of 213 fulltime and season staff members, a 22% increase over 2015 staffing thereby generating significant state income tax revenue. Dozens of Connecticut vendors, venues, and rental companies were brought in to help stage the Festival and provide materials, with some vendor relationships spanning the Festival’s entire 21-year history.

Eight hundred and fifty-five artists and speakers performed or spoke at Festival 21, representing 14 countries. Their engagements at the Festival utilized 766 hotel nights in the Greater New Haven area (20% more than in 2015 and more than twice as many in 2014). As part of its showcase of arts and culture from around the world, the Festival also works to offer a showcase to artists from the Connecticut region, with this year presenting 527 artists from Connecticut, including musicians, theater companies, and dancers.

This release includes a breakdown of facts and figures from the Economic Impact Study (see below). The data to create this report was compiled and analyzed by Quinnipiac University, under the direction of Dr. Mark Paul Gius.

ABOUT THE INTERNATIONAL FESTIVAL OF ARTS & IDEAS
The International Festival of Arts & Ideas is a year-round organization that culminates with an annual celebration of performing arts, lectures, and conversations each June in New Haven, CT. The 2017 Festival will take place June 10–24. The Festival convenes leading artists, thought leaders, and innovators from around the world for fifteen days of dynamic public programs to engage, entertain, and inspire a diversity of communities. More than 80% of Festival programs are free to the public, including events that feature some of the most influential jazz, classical, dance, and theater artists of our time. The Festival takes place in venues and open spaces in downtown New Haven, in the heart of the northeast corridor, two and a half hours south of Boston and ninety minutes north of New York City.

The Festival’s programs have an impact throughout the year and include additional performances, educational opportunities, and the annual Visionary Leadership Award. The Festival was established in 1996, by Anne Calabresi, Jean M. Handley, and Roslyn Meyer. They envisioned an annual celebration in New Haven—a city steeped in a rich array of cultural and educational traditions—distinguished from other arts festivals by its fusion of the arts with events centered on sharing ideas.

The Festival is presented with major support from the Connecticut Office of the Arts, Yale University, First Niagara, Comcast/NBC Connecticut, The City of New Haven, The Community Foundation for Greater New Haven, and the National Endowment for the Arts.
# # # #
Facebook: /artidea | Twitter: @artidea | Instagram: @artsideasct | www.artidea.org