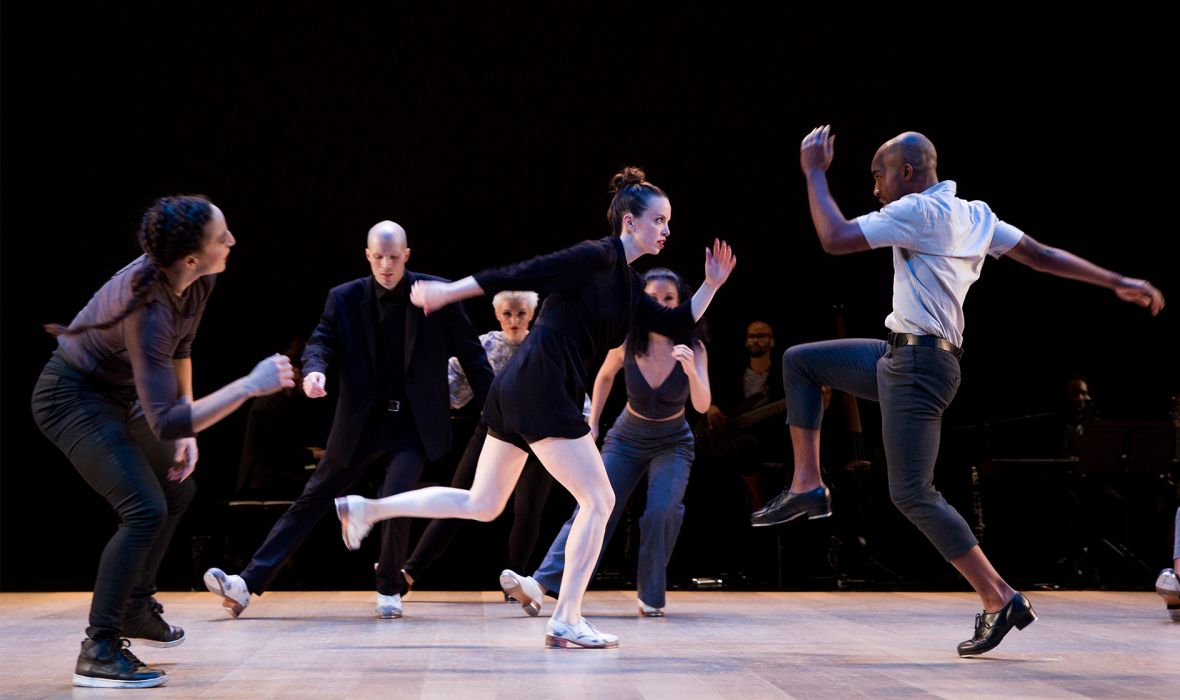 Get your tickets for Dorrance Dance in New Haven >

Michelle Dorrance found her calling when she was only 8 years old. She was training at her mother’s dance school and was lucky enough to have Gene Medler as her tap teacher during her formative years. He would take Dorrance and others around the nation and aboard to train with tap legends such as Buster Brown, Jimmy Slyde and The Nicholas Brother. She credits Medler for helping her become the dancer she is today.

Throughout her dance career Dorrance has performed with STOMP, Savion Glover’s ti dii, Manhattan Tap, Barbara Duffy & Co., JazzTap Ensemble, Rumba Tap, Mable Lee’s Dancing Ladies and Derick Grant’s Imagine Tap, just to name a few. She also holds a BA from New York University and is on faculty at the Institute for the Rhythmic Arts (IFTRA). In 2017, Dorrance was the artist in residence at the Vail Dance Festival and also curated Tireless: A Tap Dance Experience at Jacob’s Pillow Dance Festival while co-directing its tap education program with Dormeshia Sumbry-Edwards.

She started Dorrance Dance in 2011 as a way to honor tap dance’s uniquely beautiful history in a new, dynamic and compelling context. The company’s inaugural performance earned it a Bessie Award for “blasting open our notions of tap” and since then it has been racking up the accolades and performing for packed houses at venues across the U.S. and abroad, including Canada, France, Germany, Spain, England, Hong Kong and Singapore.

For its Dallas debut Dorrance Dance will be presenting ETM: Double Down, which was choreographed by Dorrance, Nicholas Van Young and Ephrat “Bounce” Asherie. The show features some of today’s most innovative tap dancers, including Christopher Broughton, Elizabeth Burke, Warren Craft, Dorrance, Leonardo Sandoval, Byron Tittle, Matthew “Megawatt” West and Nicholas Young. Dorrance and her troupe of hoofers will be at the AT&T Performing Arts Center’s Winspear Opera House on Feb. 1.

TheaterJones asks Michelle Dorrance about getting her start in the dance industry, what she wanted to accomplish when she formed her own company and what Dallas audiences can expect to see and hear at the show on Friday.

At what age did you discover tap dance?

Michelle Dorrance: I started dancing by the age of 4 and by 8 years old there was nothing I loved more than tap dance. What could possibly be more exciting than being a dancer and a musician at the same time?! My mother was a professional ballet dancer and I studied at her school from age 3 to 17. During this time, I was incredibly lucky to have Gene Medler as my tap teacher and mentor. (He sought out the living masters of our form… people like “Honi” Coles, Buster Brown, “Peg Leg” Bates, Jimmy Slyde, The Nicholas Brothers, Cholly Atkins, who at the time were in their 70s, 80s, and 90s) and he took us all over the United States to study with them… He is a master educator and taught us the history of tap dance, its cultural significance, and its unique nature as both a form of movement AND music. I performed throughout the states and internationally with his North Carolina Youth Tap Ensemble (NCYTE) for 10 years. I am the dancer I am today, because of him.

How did you go about finding jobs when you first started dancing professionally?

I was very lucky to not have to search for jobs as a young tap dancer. Because the tap dance community is so small, many different organizations, festivals and dancers knew me either from traveling and performing with NCYTE or from the scene in New York City and I worked as much as I could through my time at NYU and then skipped graduation in order to do my first gig with Savion Glover.

How has the job market for tappers changed since you entered the professional dance field?

This is a strange question only because my generation would never talk about working as a tap dancer as a "job market"—my generation of tap dancers were charged with keeping the form alive and looked to ourselves and each other to create work that didn't exist when we were growing up because we so cherished the form. Creating jobs, however was a byproduct of wanting to share this beloved art form with new audiences as often as we could.

What did you want to accomplish by forming your own company?

I created Dorrance Dance with the hope of sharing the incredibly dynamic range that tap dance has to offer; in order to engage with audiences on a musical and emotional level through dance; in order to spread the great history and legacy of this American art form throughout the country and the world. Of course, I love experimenting, creating my own work/choreography/compositions, but my role is, most importantly, as part of a community full of many creators, historians, teachers, and revolutionaries! We believe in sharing the brilliant individual voices and styles that continue to honor our past, but reflect the way that tap dance is pushing boundaries in every direction today—from street corners, to museums, to night clubs, to opera halls and back.

How did you and Young come up with the idea for this show?

Nicholas Young is essentially a mad scientist, but also a dear friend and had already created an excited solo composition using the technology and the way ETM interfaces with it, through small [electronic drum-kit-like] trigger boards. Each small board can be assigned any sound, note, instrument—anything you can imagine. He first built the solo (and designed a way to use the technology) so that he could create a musical composition LIVE, with his feet, looping it, changing it, building it, while still soloing as an improvisational tap dancer, over it. This original solo work of his laid the entire foundation of what we now explore technologically in the show.

Can you describe the different musical elements you will be using in this show?

ETM: Double Down features what is essentially an electronic drum kit for the feet, designed by Nicholas Young. Each small board that we play with our feet (we call them trigger boards) is connected to a computer and can be assigned a percussive sound, note, musical instrument, anything you can imagine! Then, the entire set can change! Nicholas originally designed this particular way of interfacing with the technology in order to compose music live WHILE dancing/soloing to it.

What we have been exploring in ETM: DD is the way our percussive composition/choreography for our feet can interface with a musical composition, where sometimes the dance is literally the dance of playing ONLY the melody or baseline of a song, and sometimes the dancers straddle the playing of a few notes each in order to make up the entire composition, while simultaneously executing separate tap choreography/percussive score. When you are in the midst of it, it is totally mind-blowing.

Collaborating with Nicholas was always a dream, but it was also an inevitability. We have been abstractly collaborating for the entirety of our friendship (we met when we were 14 and 16 at the St. Louis Tap Festival and have been friends ever since), but formally collaborated on ETM because of the technology Nicholas was incorporating into his solo work and how excited we both were to manifest that with an entire company of dancer/musicians!

Are all the dancers and musicians people that you have worked with before?

At this point in the company, we have all known each other for years. Like I said before, Nicholas and I have been friends since first meeting at the St. Louis Tap Festival when we were 14 and 16 years old. We have hoofed on subway platforms together, toured the United States in STOMP together, played in a band (Darwin Deez) together, etc. I have a story like that (i.e. I've known my dance captain since she was 5 years old studying with my mentor, Gene Medler, in North Carolina) for many of my dancers and musicians.

The tap community is such a family, we have never had to have an audition. These dancers are unique personalities, unique physically, unique in their improvisational expression, in their rhythmic sensibilities, in their musical expression and inflection. I love them because they are so different from one another. To bring these disparate personalities together as an ensemble is so exhilarating, to let them live as individual artists within the work brings me joy. I don't want to watch myself for an hour! I want to see them. I want to create a show that I want to watch, that's really the dream, and these really special artists/friends/family make that possible.

How has the show helped change certain perceptions audiences have about tap dance?

I think the show will pleasantly surprise those who have traditionally not enjoyed or maybe even dismissed tap dance. The fundamental elements of tap dance are universal. The dance of creating music is something tangible that every audience in every country that I have ever encountered has connected with immediately. The impact that tap dance can have on an audience member and the universality of the language is never lost due to a lack of cultural context or history; however, an understanding of American culture and American history takes the depth of impact and appreciation to another level.

Where would you like to see the style of tap go from here?

The future of tap dance is absolutely limitless. My vision involves tap dance moving in every direction at once. We, Dorrance Dance, are actively touring on what is a predominantly contemporary, modern and ballet driven concert dance circuit. We will continue to do this while also educating our audiences (and presenting organizations) about tap dance’s very misunderstood history and about other incredible tap dancers/companies/choreographers that they should seek out! My vision is also to support tap dance as a mainstay at every jazz music festival like it once was, to support tap dance on television, in films, and particularly support GOOD tap dancing on the Broadway stage.

There also needs to be a revolution in university dance and music programs to incorporate an accurate history of tap dance (the oldest American art form after Native American forms), I am working to collaborate with historians and dancers to develop this as well as a second company of dancers dedicated entirely to lecture-demonstrations! There is a lot of work to be done, but what an incredible honor to do it!

Get your tickets for Dorrance Dance in New Haven >