Home Festival Blog AD INFINITUM: “IT’S A SERIOUS PROBLEM WE HAVE AND WE’RE NOT REALLY FACING IT” 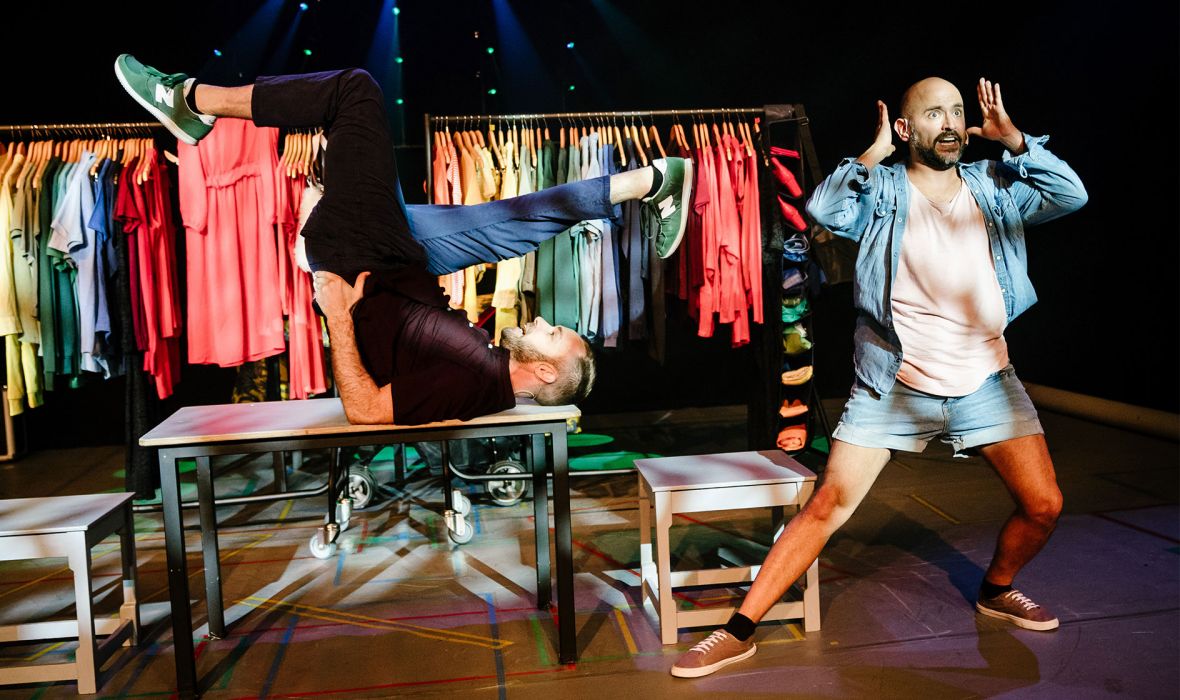 AD INFINITUM: “IT’S A SERIOUS PROBLEM WE HAVE AND WE’RE NOT REALLY FACING IT”

The team behind Chloe and the Colour Catcher, return with a very personal project about themselves – a same-sex couple and how and if they should have kids.

The co-artistic directors of acclaimed company Ad Infinitum, George Mann and Nir Paldi have just returned from their honeymoon in India when we meet up via FaceTime. Partners in art and in life, they are about to embark on a new touring run of No Kids, Ad Infinitum’s most recent work, in which they star together as a kind of ‘version’ of themselves, a couple trying to figure out an honest and true answer to the dilemma of children. How to have them – adoption, surrogacy, co-parenting – but also whether, in fact, to have them at all.

The show, opening its tour on Thursday 24 January at Liverpool’s Union Theatre, was also performed in Edinburgh at the previous Fringe, and George and Nir last performed it in November at the Birmingham Hippodrome. Since then, as George tells me, they have been going through tweaks and changes. They expect that the show will continue to shift as they continue to move and change with it, since the central argument of the piece – their own search, as individuals and as a couple, for answers to these essential human questions – depends so much on difficult personal material.

“A lot of our shows come from a very personal place, but this was very directly personal,” George says, adding that “it pushed us to a place that we haven’t really gone before.” The process of distancing themselves, of seeing themselves as characters, and not merely as ‘Nir and George’, was very important, especially toward the latter part of the rehearsal process, when acting took centre stage and the pair, as performers, found themselves almost seeing one another in the third person. “It’s a slightly awkward mirror,” George concludes, “because you start seeing aspects of yourself that you hadn’t really seen before: either it’s reflected back at you through the writing or through each other […] and that can be very surprising or challenging or uncomfortable.” For Nir, the greatest challenge involved learning how to disregard the personal when necessary, instead understanding the requirements, as he put it, ‘the technicalities’ of storytelling, especially if that might well mean disregarding personal verisimilitude for theatrical truth.

The pair have taken issues which are currently at the heart of their personal lives, and neither is unaware of the pitfalls of this. Not only in the autobiographical nature of the show outlined above, but as both of them outline, the trepidation they have felt at placing their relationship and their insecurities so boldly onstage, in a way they have not before. “The piece deals with very difficult questions and difficult issues, and parts of our lives that are quite dark, beautiful things as well and it does that via our relationship,” explains Nir. He describes the experience of performing this material as, “in an ironic way”, a very intimate act with the audience, given that the relationship onstage is, in George’s words, “the way we’d speak to one another even on a daily basis […] we have an entire universe and a language like many couples do, I imagine – so it has this specific colour which is us in this situation.”If No Kids takes its structure and performers from the personal, its subject matter and concerns are without a doubt, universal, if not universally discussed. The kind of long, deliberated and protracted questioning of the ethics of childbirth and childrearing is rare enough to see in public discourse. The history of homophobia, internalised anxieties and the formative experiences of their own lives in relation to sexuality were all creative and personal issues which George pointed to as the piece was developed. He elaborates on some of the results of homophobic conditions. “When you come out you can choose who to come out to, but a child […] almost becomes a kind of symbol to everyone, because there you are, you’ve two dads. The stress of this on both parent and child is natural,” says George, “and is a specific consideration which same-sex couples must undergo.”

The specifics of their own situation regarding prospective parenthood fuelled the increasing amounts of research that George, Nir and their collaborators undertook for the show, a process which is typical for all of their work. Nir describes their questioning of ‘the best way’ to adopt – meetings at a fertility clinic to hear about the procedure of surrogacy adoption, recruiters for advisory sessions, a charity in Bristol which provides information on adoption, for same-sex couples, the siblings of adopted children and children born through surrogacy, couples straight and gay. “The whole point of the show,” as George describes it, “is to watch two people really thoroughly getting fucked up debating and getting into it and inviting the audience to do the same thing: “come on, think about this, it’s important.”

This kind of wider conversation is less to do with sexuality than with the wider environmental ethics of raising children. George and Nir have drawn on their conversations with Dr. Kimberly Nicholas, Associate Professor of Sustainability Science at Lund University, in widening their awareness of the environmental context of childbirth. “It’s a serious problem we have and we’re not really facing it,” George says: “using a reusable coffee-cup is great but it’s not going to save the world.” As the two learned, not having a child amounts to saving 58 tonnes of carbon, the biggest act that a single individual can make in their lifetime.

The pair seem to have come away, not with any certain answer to their questions, at least toward the more existential nature of childbirth. Yet they both urgently say, and hope the show will also, that this topic and this conversation must be given a much wider and stronger prominence than it currently enjoys. The idea is “to question that societal condition that kind of imprints on us that we’re all gonna grow up and have children,” says George in frustration, “they grow up with this very, very real expectation. I think,” adds Nir, “it’s to legitimise the child-free life in some ways […] people fought so hard to get the right to be acknowledged as the parents of a child, so it’s hard to actually say we need to discuss not having children. Because, biologically, it can’t happen for us, we need to go out of our way in one way or another to make it happen.” Issues of social pressure, stigma, worries of maintaining oneself and one’s loneliness in later life are all valid and a conversation must exist loudly and honestly before solutions can be found. As a piece of theatre which demands more honesty from ourselves regarding, perhaps, our most basic ‘biological drive’ (in Nir’s phrase) No Kids seems exciting, welcome and overdue.