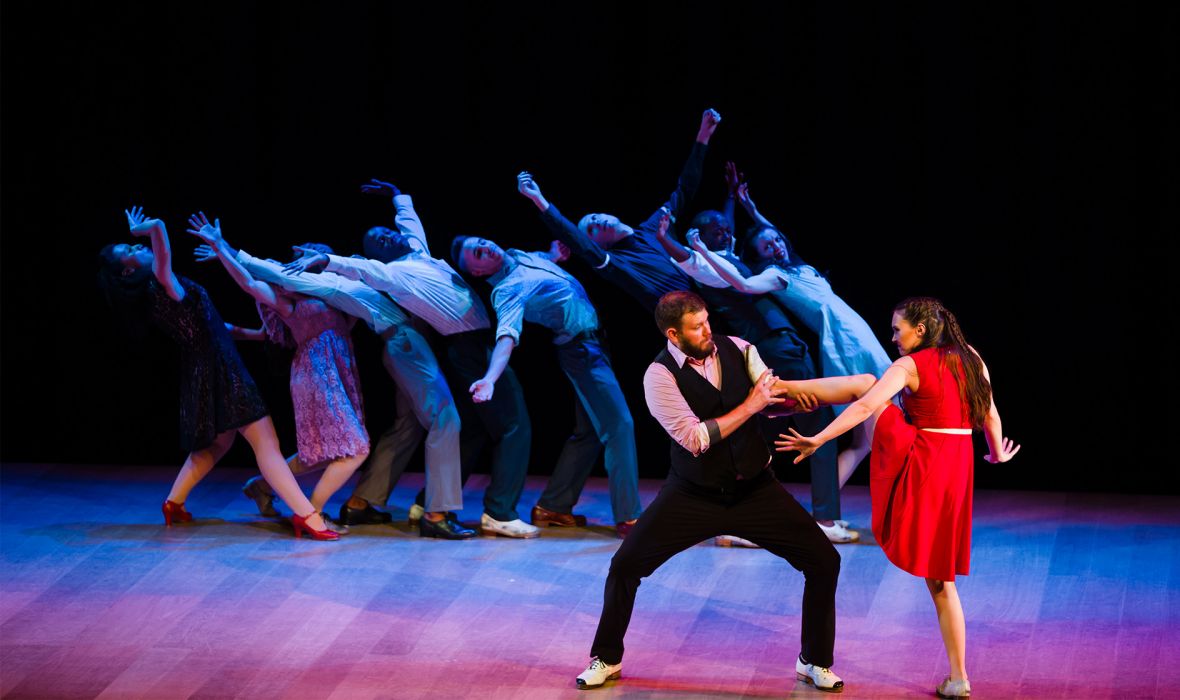 Myelination is a biological process crucial to brain function. It is also the title of a sensational work by choreographer Michelle Dorrance. Dorrance and her company, Dorrance Dance, performed the Boston premier of “Myelination” last Friday night at Emerson Cutler Majestic Theatre, in the first of two shows presented by World Music/CRASHarts.

Celebrated for pushing the tap-dance tradition in new directions, Dorrance finds common ground between her 45-minute piece and the rapid, pulsing patterns of brain cell formation that nurture extraordinary peaks in learning and performance. Born of a 15-minute work by the same name commissioned by New York City Center in 2015, the work has expanded threefold with a combination of ensemble and solo passages that are never quite the same. Celebrating high performance in both improvisation and in the patterned repetition associated with tap, “Myelination” is a complex kaleidoscope of sound and motion.

Its sounds come from tapping, scraping feet and live music performed on stage by Donovan Dorrance, the choreographer’s brother, Gregory Richardson, and vocalist Aaron Marcellus on acoustic bass, piano, keyboards and drums. Always in dialogue with the dancers, their music varies from percussive contemporary passages to lyrical, balletic melodies.

The performance began with two 10-minute works: “Jungle Blues” (2012), an all-ensemble performance to a recording by the Branford Marsalis Quintet; and “Three to One” (2011), a work for three dancers with music by Aphex Twin and Thom York. Each is terrific on its own, and together they reveal elements taken much further in “Myelination.”

Dorrance’s choreography is free of hierarchy; while certain dancers may be singled out in a work, each member gets to express individual style and personality. Dorrance performs too, often in the background but occasionally in a solo. When stepping into a duo, she delights in drawing out her partner’s unique style, alternatively challenging and responding to the dancer.

All 10 company members join Dorrance in expanding the vocabulary of tap with their individuality and with moves that vary from acrobatic extensions, pretzel folds and break-dancing wizardry to eccentric and spare soliloquies and evocations of modern dance that embed stretches of silence into the music of tapping feet.

The captivating “Jungle Blues” features seven soloists and blends swank sophistication, touches of drama (a brief pantomime of male-female attraction and conflict, all in fleet-footed speed) and edgy syncopation into a jagged, harmonious whole.

In the introspective, minimalist “Three to One,” chiaroscuro lighting by Kathy Kaufmann envelops the three dancers in darkness, selectively lighting their legs and occasionally their entire bodies, which are wrapped in short black tunics. Moving in and out of synch with one another, Dorrance wears taps while her partners, Byron Tittle on one side and Matthew “Megawatt” West on the other, are barefoot, yet all three make sounds with their feet. In a fierce solo, Dorrance glides across the stage in tiny micro-steps that burst with pummeling energy.

“Myelination” opens with music that evokes a heartbeat. The company moves like a single organism and then breaks into explosive parts, each dancer fashioning a world of his or her own before reuniting into an ecstatic, exalting whole. Celebrating both individual and ensemble aspiration and achievement, the mesmerizing work creates something new before our eyes and draws us in, spellbound.