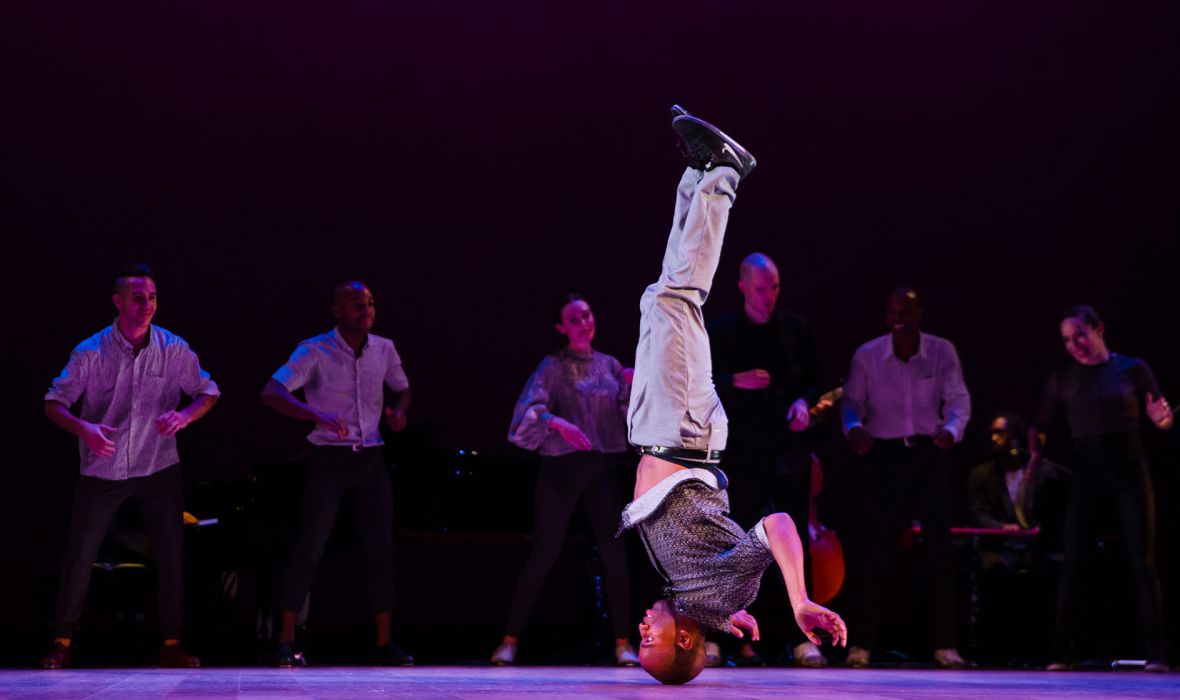 Michelle Dorrance would be considered a tap phenomenon even if all we knew of her was virtuosic footwork. But as her movement skills have developed and matured, so has her musical acumen and choreographic imagination, elevating tap to a new level of execution, innovation, and sophistication. And with Dorrance Dance, presented by World Music/CRASHarts Friday night, she has assembled a rock solid crew of impressive, precise technicians with vivid personalities and fabulously expressive flair.

The program opened with the jazzy “Jungle Blues.” Set to the eponymous tune by “Jelly Roll” Morton, this was a sly, sassy party with playful relationships forming and dissolving. Slides and scrapes eased into breezy turns and falls to the floor that never kept anyone down for long.

The clever opening trio of “Three to One” is a personal all-time dance favorite — period. A tap-shoed Dorrance is bookended by barefooted Byron Tittle and Matthew “Megawatt” West, and for much of the dance all we see are legs and feet. Kathy Kaufman’s lighting illuminates knees and ankles swiveling in and out of unison, like levers in a tightly calibrated machine. As Dorrance’s flurry of taps create a pristine rhythmic overlay to Aphex Twin’s “Nannou,” the men explode into muscular, off-center coils, turns, and lunges. The second section wind down solo feels superfluous.

Then comes the revelatory “Myelination,” a full-company 45-minute expansion of the dance the company presented here in 2017. It is complemented by a vibrant original score created by Donovan Dorrance and Gregory Richardson, with vocalist Aaron Marcellus (plus Nicholas Van Young on percussion in live performance). This brilliant collaborative work has Dorrance’s distinctive imprimatur, allowing the diverse cast to shine in all its idiosyncratic glory, whether in tight ensembles or singular improvisations. Award-winning B-girl Ephrat “Bounce” Asherie is a tiny dynamo weaving a bright tensile thread throughout the work, often in twisty floorwork and vigorous interplay with West’s eye-popping acrobatic breakdance moves. Christopher Brougham’s effervescent solo lights up the stage with crisp, jubilant footwork, while wraithlike Warren Craft contributes a poignant vulnerability, dancing as if his limbs are made of rubber, weight in constant flux, legs and feet splaying.

Group sections ebb and flow with meticulously crafted precision, locking into unison one moment, fracturing into layers of counterpoint the next. Rhythms percolate and cascade as bodies layer and shift. Yet throughout it all, this edgy, groundbreaking work still feels deeply human, often joyously communal. The energy and spirit reflect the scientific process of the title, in which myelin forms a sheath around a nerve to allow electrical impulses to move quickly. In Dorrance Dance’s quicksilver “Myelination,” the results are indeed electric.

By Karen Campbell Globe Correspondent January 20, 2019 for The Boston Globe