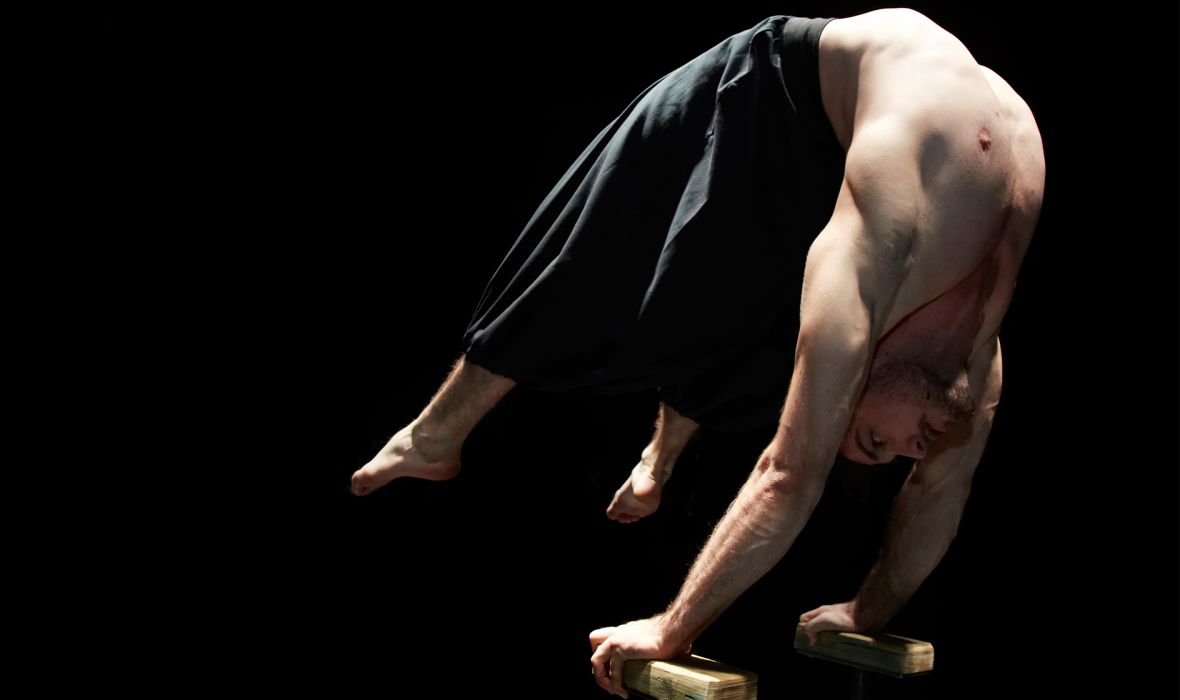 Australian circus artist Daniel O'Brien comes from Maryborough, three hours north of Brisbane. He started gymnastics at six years old but gave it up at 15. However, he later he moved to Melbourne to train in circus at NICA, where he specialised in hand-balancing and aerial straps. He has been an ensemble artist with Circa since graduating in 2013. Daniel is married to Kimberley O'Brien, another Circa ensemble member. In his spare time he loves playing video games and reading.

Having already been in eight Circa shows, Daniel now joins the cast of its latest production, Humans, which explores the physical limits of bodies that are pushed to extremes. He chats to Liz Arratoon from Brisbane, where the show is in creation. Humans has its world premiere during the Sydney Festival, where it runs from 13-19 January 2017 at the Spaghetti Circus Big Top.

The Widow Stanton: Was your original aim to be an international gymnast?
Daniel O’Brien: I’d say it was semi-serious. I did state competitions but never national. Mid-way through high school I realised it wasn’t really going anywhere fantastic, so I stopped.

Were you from a sporty family?
I have three older sisters and they all did gymnastics. They did it because our mum had a friend who ran the gymnastics club, so I did it just by association, really.

What made you think of doing circus?
After high school I had a rare epiphany and realised I didn’t want to waste the time and training that I’d put in previously. I contacted my old coach and he suggested circus to begin with, then I researched the circus school in Melbourne and stuff like that. I’d seen traditional circuses that came through my home town but nothing super-contemporary.

So many young artists I speak to were inspired by Cirque du Soleil…
I’d seen Cirque du Soleil’s Saltimbanco, and as a gymnast I looked at the gymnasts and it was kind of a weird performance-art sort of thing that didn’t particularly resonate with me, so I’d say it played a small role, if any at all.

Why did you choose hand-balancing and straps?
I had no real idea of what was going on to do with circus so I just talked to people who’d been at the school already and they recommended that I go into them. It made sense because of my gymnastics background as I already had conditioning in those areas.

Having aerial and ground skills makes you pretty versatile…
Definitely. Even though I don’t do straps very much anymore it was really that that got me hired in the first place; the versatility. I’d been in talks with Circa just before the end of the school year and by the end of it I signed a contract.

So you were aware of them when you were at school…
Definitely. They’re kind of the big healthy company that people want to work for but at the same time there’s a sort of strange disdain for them.

Is it jealousy more than disdain, in the same way people would slag off Cirque du Soleil just because they were so good?
I like to think so, just because I’m part of the company now, but there’s definitely that tall-poppy syndrome. People think that people who work for Circa don’t work as hard as in smaller companies where they have to go out and hand out flyers and stuff like that.

But you work so hard the rest of the time! You’ve been in so many Circa shows, do you have a favourite?
It depends but I’d say What Will Have Been, the trio show…

We saw you in Norwich…
Exactly. I just have a soft spot for that because I helped create it. I was one of the original acrobats rather than just recreating a show that’s been done before. And probably Opus after that because that has a big cast so performing it is always like fun times.

Doesn’t the Circa ensemble always have an input into creating the shows?
Yeah, that’s definitely part of the appeal of the company and the unique flavour of what we do.

Could you see yourself creating your own shows?
I’ve thought about it more recently as I’ve been performing more but I don’t see myself making my shows at this point.

Would it appeal to you to be Yaron [Lifschitz, Circa’s creative director]?
Certainly I’d hope not to be a busy as Yaron. [Laughs]

You said you don’t get much chance to do straps… I can remember a bit of static trapeze but not much aerial stuff in Circa shows…
I guess it’s specific to certain things. It depends on the ease of touring to certain places, whether they have enough equipment or things like that, and I think Yaron is wary of putting trapeze in every show and likes to make sure that we put different things in.

Do you miss doing aerials?
Sometimes. There is a possibility that there might be some in Humans but I just do what I can when I can, really.

Do you still have to train it even though you’re not performing it?
I hadn’t trained it in a year and a half and then out of the blue I started training it for for own personal fun. It’s a very different feeling to the usual. Then Yaron said he’d been thinking about putting it in the show anyway, so it was a happy coincidence.

I’ve noticed a bit of trend where people are just hand-balancing on the floor or a flat surface. It obviously makes it harder…
Definitely. I think it comes from normal trends where one person does it on the floor and everyone thinks it looks really good and so they start training for that and it just comes in waves.

Have you picked up other skills being with Circa?
Definitely group acrobatics wasn’t really pushed at my school, and I think I’ve put on maybe seven or eight kilos of muscle just from carrying people. I finished three years of school of never really touching anyone else, or having people stand on my shoulders or anything like that. As soon as you move to Circa that’s just part of the vocabulary, someone standing on you or you standing on someone else, so you really quickly put on a bit of extra bulk to facilitate that.

What is your hardest hand-balancing move?
The hardest, and the one that people are most surprised that I do, is the position where your back is very arched over and then bent to each side. I go from the front and rotate through those three positions and then cut back to the start in a big sort of whirligig. Not very many people do that at the moment, which is why I cling to it as my signature trick.

You should put your name on it!
[Laughs] It’s far too late for that, I’m sure.

You enjoy being involved in the creation of its shows, what else do you like about being in Circa?
Definitely the travel is a bonus; we get to see a lot of different places. But it’s really the people we get in; we’re often getting to work with new people. We could just do the same show every night but because we’ve got his constant recreation process onstage, where we’re trying to improvise and make it different each time, it just keeps it really fresh. I think that is super important when you’re doing circus shows.

So is there improvisation in every show?
A lot of the shows have segments or duos where it’s improvised. That’s part of what makes it so magical, I guess.

But that could go badly wrong! [Laughs]
It’s funny, you can structure a show to be good every night and it’s at 80 per cent, and then when you improvise you run the risk of making a 60 per cent show but you also have the chance to make it 110 per cent, which is just amazing because of the authenticity of it.

Can you tell us anything about Humans?
We’re smack bang in the middle of creating it at the moment. We had two weeks with Yaron creating languages and throwing ideas around. He’s currently in Mumbai looking for Indian artists for another show, so we’ve just been reducing his ideas down to acts that we like. He went away and said: “When I come back I want to see all of these amazing tricks that you’ve made up.” So Monday will be a pretty big day of show and tell.

That’s quite a responsibility…
Definitely. It’s a lot of pressure as you run out of time to make things that you hope he likes. A lot of the material that we’re making is completely without soloists, so duos at a minimum and a bunch of trios and quads and things. I assume they’ll be a big group scene to justify there being ten acrobats in the cast.

How do you cope with Circa’s intense programming and being onstage all the time?
We have this intense schedule but we have a lot of office staff who’ve been doing this for a long time, so were in constant communication about what we need. Often we won’t get off a flight and have to do a show straight away. They’re very savvy to what we need and then often it takes us being responsible enough to go in an extra hour early to make sure we’re stretched and ready.

Are any of your sisters doing what you do?
None of my sisters pursued a career in gymnastics or circus, although my youngest sister has just started some casual aerial classes. My family has really been super supportive of the whole process, from helping put together my audition piece for NICA all the way to coming to see my shows now that I’m performing full time.

Does Circa usually put you in the same show as Kimberley?
We’ve been lucky so far this past year and have been able to do the same show. There’s a bit of programming coming up where’ll we be apart for a little bit but we take it as it comes. Kimberley performing is just as important as us being together and we wouldn’t want to miss out on shows just for the sake of touring together.

I gather you both like playing video games…
Definitely. That’s one of my tips for staying sane on tour is having a strong hobby.

Is it anything to do with it being non-physical?
[Laughs] If my hobby was running I think it would be a bit unfortunate because I don’t feel like going for a run after a show but I’m quite happy to flop down on a couch and play some games.

What has been the best bit of your career so far?
Performance-wise probably doing Opus at the BAM festival in Boston or The Return at the Barbican in London; probably the big venues that I’ve performed at.

You’ve done the Sydney Festival once before, how do you like it?
It’s really nice, as well as being in the middle of summer in Australia! [Laughs]