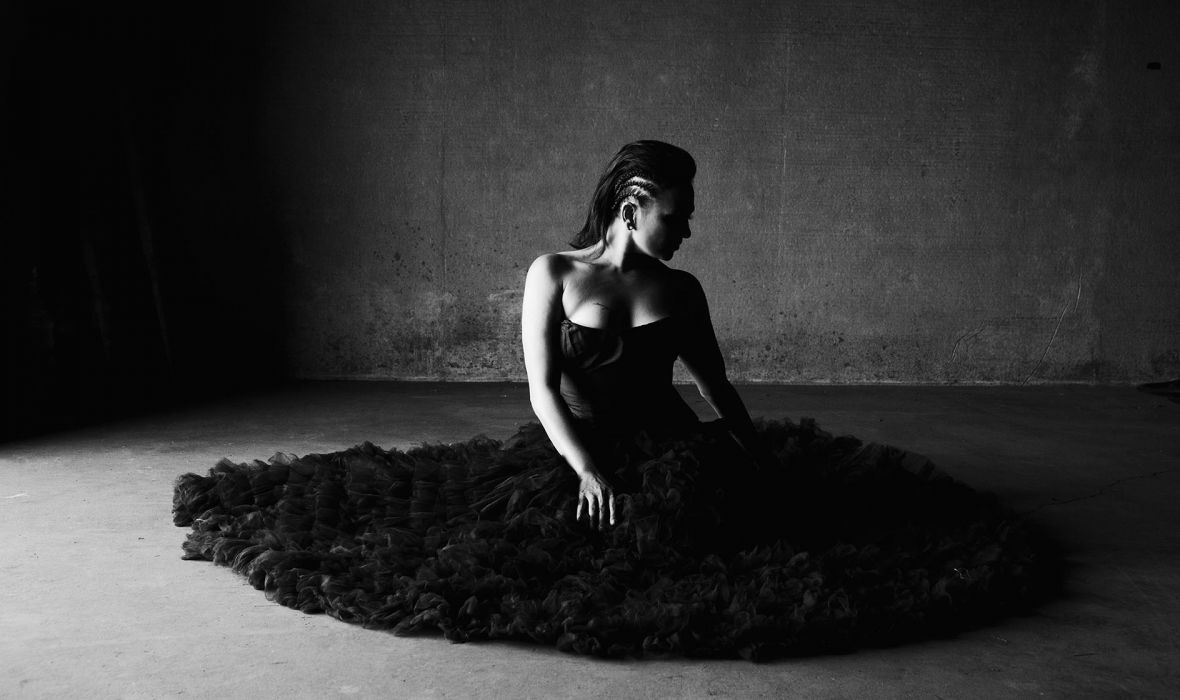 Canadian Inuk vocalist Tanya Tagaq is a wildly inventive artist who seems to master any medium in which she creates. Her music is like nothing you’ve heard before: a blending of punk, folk and electronica into a complex and contemporary sound. Backed by a “sound tapestry” choir, Tagaq will bring her unique style of throat singing and artistry to UW’s Meany Center on Friday, Feb. 8. She will also read from her book Split Tooth, followed by a Q&A with the author, on Wednesday, Feb. 6, at the wǝɫǝbʔaltxʷ – Intellectual House at the University of Washington’s Seattle campus.

As a musician, composer, songwriter, vocalist and throat singer, Tagaq has worked with some of the best artists in the world and received accolades like Canada’s Polaris Prize, awarded in 2014, and numerous Juno Awards, Canada’s Grammys. A noted artist and painter — she went to school for visual arts — she’s also worked in film, with the short film Tungijuk (2009) and with her improvised live soundtrack to the seminal, though problematic, film Nanook of the North. She’s just published her first novel, Split Tooth, which was immediately longlisted for Canada’s prestigious Scotiabank Giller Prize. Questing for yet another medium, her brilliant turn as an audiobook narrator for Split Tooth, mixing prose, poetry and sung vocalizations, is redefining what an audiobook can do. In the same way she works across artistic mediums, Tagaq relentlessly devours genres, pulling easily from metal, punk, rock, electronic, folk and traditional genres in all of her work, and quests continuously for new collaborators. She’s worked with everyone from Björk to The Kronos Quartet, bringing her own sensibility to each project, refusing to be bound by anyone’s expectations for her work.

Tanya Tagaq is not a traditional artist. Nor is she an experimentalist. She is a trailblazer. An artist committed to forging a new path each time she creates. She carries her past and her perspective with her on these trails, but she pushes herself to consistently break new ground. Her music bridges between worlds, from pre-Christian Inuit culture to cutting-edge creative avant-gardes, but it’s also meant to be a bridge between people. The largely improvisational nature of her music and creation ties her viscerally to each audience, and creates a feedback loop between singer and listener, a turning of sound and spirit that increases in power with each revolution. Her performances are electrifying, drawing out unexpected passions in herself and the audience, creating new sounds, new rhythms, and pushing her physical body to the limit. This is music as a force of change. Music tied to the elements. Music that moves between worlds.

With such a wide-ranging field of inspiration and collaboration, it might seem incongruous that Tagaq’s core inspiration continues to be the world of Inuit throat singing, but the traditions of Inuit throat songs are themselves wildly creative. Usually called katajjaq, Inuit throat singing is a sung interplay that’s one part game and one part experiment, a flow of vocables played or performed between two women. Largely improvisational, katajjaq uses intense vocalizations, cyclical rhythms, and a kind of circular breathing that allows the singers to sing while inhaling and exhaling. Two women stand close together, singing almost into each other’s mouths. It’s said that in the older styles of katajjaq, one woman would use the other’s mouth and head as a resonating body, intimately linking both bodies. Tagaq discovered these sounds from cassette tapes her mother sent her when she was away at university. Though born and raised in the remote community of Cambridge Bay in Nunavut, Tagaq didn’t grow up singing and was looking for an artistic outlet. She taught herself Inuit throat singing on her own, developing unique techniques to recreate the sounds of two women that she heard on those first tapes. She never aimed to create traditional music, but used these sounds and vocal ideas to explore the range of her voice and the scope of her art. She also tapped into the real heart of the tradition, a spark of joy, of life. As a game, katajjaq is a friendly competition between two women that is won when a mistake, a surprise, or an unusual sound causes the other to dissolve in laughter. This spirit of invention and laughter and exploration is at the heart of both the tradition and Tagaq’s aesthetic.

Inuit throat singing is also deeply feminine, and this ties to Tagaq’s larger vision as well. Her most current album, Retribution, channels fury over the sexual assault and exploitation of women, and ties this violence towards a feminine perspective of the planet that we’ve so abused. Her music on the album has been called “wombcore,” and Tagaq herself speaks of the power of the female form, as a life-bringer and life-taker. With Indigenous women in Canada (and the United States) far more at risk for violence or murder than their white counterparts, Tagaq is using her platform to push for equality, and to push for a solution to this plague of violence. Her intensely powerful 2014 performance at the Polaris Prize awards saw her performing in front of an endless scroll of the names of missing or murdered Indigenous women in Canada over the past thirty years. That the takeaway from the evening for most people was her “more” controversial statements against PETA, over the international bans on seal hunting, confounded her. How could we be more focused on the life of a seal, than on the life of a woman?

Life and death live hand-in-hand in the music of Tanya Tagaq. Growing up in a hunter culture, she saw first-hand how Inuit use the land to draw meat and food, nutrients and vitamins–sustenance of a much higher and more nutritious level than the groceries that needed to be flown in and cost exorbitant prices. She’s spoken of the reverence Inuit hunters have for animal life, of how the hunters pour snow into the mouth of a dead seal so that it will have water to drink in the afterlife. In her short film Tungijuk, Tagaq shapeshifts into a wolf taking down a caribou, then into a seal, then into an Inuit woman eating the seal’s flesh after it has been hunted. Her debut novel, Split Tooth, explores these themes in depth. It’s one-part fiction and one-part memoir, mixing anecdotes (many deeply unsettling) of her upbringing in the Arctic with a fantastical story of a woman’s discovery of her own sexuality and motherhood as seen through vision-laden mythological interactions with animal spirits and the northern lights. Like much of Tagaq’s work, it has no small aim: to recreate a new morality based on Inuit and far Northern values. This new morality, based on a deep love for our shared humanity and a reverence for natural life, holds the real message of Tagaq’s music and shows us why she pushes herself so hard to find the best means to express it.

Posted on Jan 22, 2019 by Devon Leger for Meany Center - The Seattle Globalist