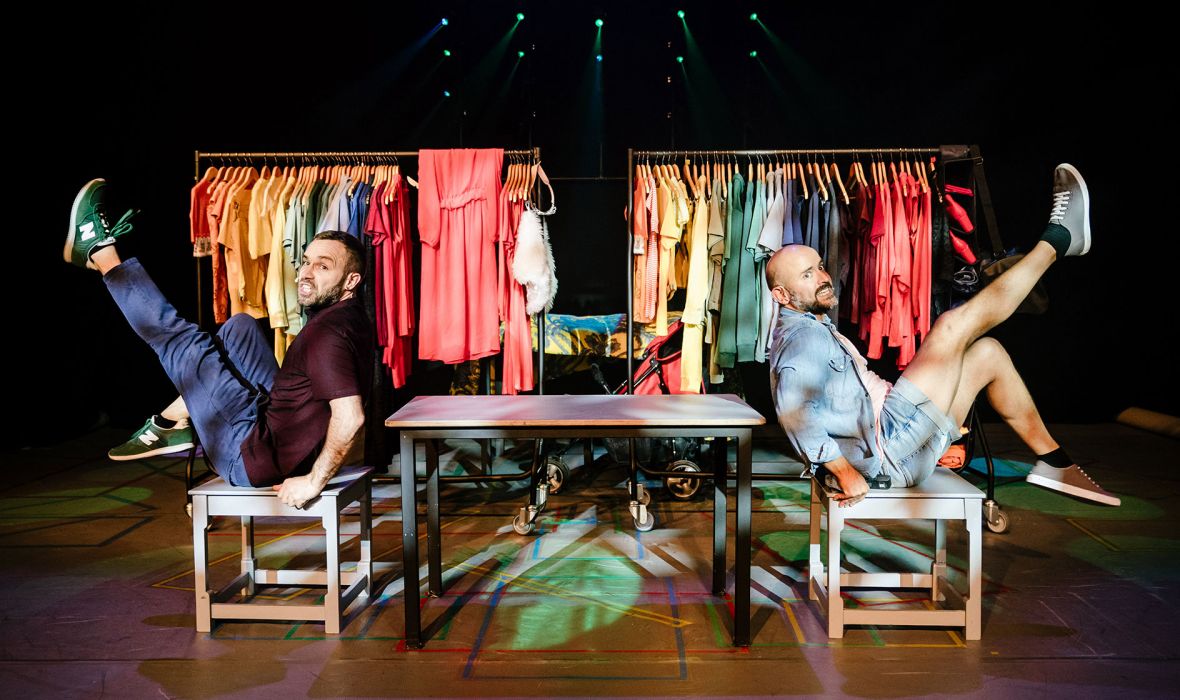 No Kids is much more than a play. It’s an argument, a discussion, a life decision. An exchange between real-life couple Nir Paldi and George Mann, No Kids asks a simple question that hangs over the hour-long performance as it does their relationship: should they have children?

Despite what the title of the play might suggest, the question is not a simple one for this couple to answer. First, as a gay couple, debating whether having a child via a surrogate is ethical dominates the conversation. Then, alternatively, how would an adopted child adapt to having two dads, and no mum? The couple engage in flurries of both positive and negative thinking, imagining specific scenarios with their potential future child in great detail.

In fact, there is a wonderful child-like quality to these games of ‘imagine if’, which are brought to life through dress up, dance and swapping characters in their roleplays. Thankfully, this doesn’t take away from the two sides of this piece, so that at times No Kids makes you giggle and laugh out loud, while at others, such as imagining a child being bullied, it successfully but somewhat harshly recalls the particular pain involved in growing up.

The bursts of energetic dance and thread of early Madonna music give the play even more life, and matches both their personalities well. Their unified dance routines remind you that even when they are arguing, and imagining their future divorce when parenthood drives them apart, that what will always bind them is love. It’s touching and intimate, and makes us realise that whatever answer they come to, they will always have one another.

The stage design is a little crowded, with multiple tables being moved almost constantly, to help visualise the latest imagined scenario, which can admittedly get a little dizzy. Similarly, while the music of Madonna and content of the sound works well, at times it is a little clunky and we become aware of the sound system and the slightly too loud music.

No Kids’ humorous yet emotion-packed snapshot into the deliberations that one couple face regarding parenthood makes for fascinating viewing. A conversation through dialogue and dance reveals that while we may be adults, deep-down we were all a child once, and that becoming a parent takes a whole lot of love.