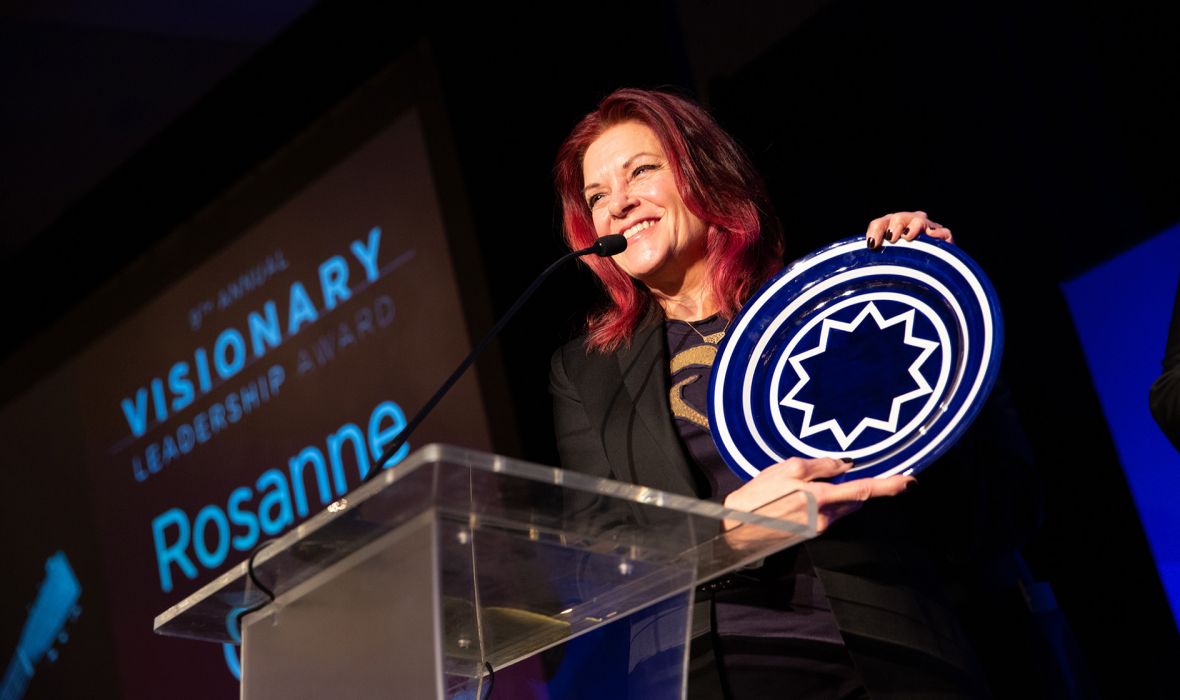 On what would have been her father Johnny Cash’s 87th birthday, Rosanne Cash was warmly welcomed with applause at the 9th annual Visionary Leadership Award luncheon. She was humbled and inspired by the praise and insight of past VLA winners and New Haven female leaders presented through video before she took the stage.

Moderator Butch Rovan, Faculty Director of the Brown University Arts Initiative, composer, media artist and performer, opened the conversation by asking Cash’s opinion on how music enables activism. “Music is activism,” she answered. “All art is political.” Cash shared her belief that music serves as an expression of the soul. It uncovers access to feelings and compassion. She noted, “Once [people] have access to compassion, things start to change.”

Cash discussed the oxymoron of enraged compassion and how it drives her to create and speak out. One way this rage manifests is as what she describes as “feminine rage”. “Women my age still have a lot to say,” Cash said. She explained the value of “believing in your own legitimacy” as a woman at the age of 63. After retelling the story of her daughter’s frustration after the election and her son’s apprehension of sexism in our country, Cash proclaimed, “I want my daughter and all young women to know they matter.”

Rovan brought up Cash’s song “Particle and Wave”, marvelling at Cash’s deep connection between love and the intricacy of quantum mechanics. “One day, I was laying around thinking about quantum theory,” Cash joked, continuing to explain that she has a physicist friend who breaks down some of the concepts for her. Cash was fascinated with the beauty and complexity of the study’s language and concepts. “Is there love that can surpass the speed of light?” she contemplated.

Cash’s most recent album release, She Remembers Everything, addresses life themes of love, loss, and dream-chasing alongside women’s rights and the complexity of trauma, embodied in her concept of the “rainbow of suffering”. She observed that we spend a lot of time trying to escape trauma, compartmentalizing it, and erasing it, trying to get back to who we were before, but that suffering naturally makes up half of life. Cash suggested that trauma and empathy crack your heart open, which is integral to being open to change.

As the conversation came to a close, Cash told Rovan that she is inspired by people who are committed to “being present for what is. Being fully present is a political act.” In her appreciation speech, she acknowledged the families of Sandy Hook victims’ families who were present, telling them, “You show courage by being here. I don’t have that kind of courage.” She said that she recognizes the privilege of being on stage, in front of an audience, with a microphone as opportunities to encourage, inspire, and challenge.

“I have to accept reality, but I don’t accept that it has to be this way tomorrow,” Cash said. She admitted she is afraid of her generation’s great-great-grandchildren looking back and saying, “what were they thinking?” which motivates her to work for a future in which they can say instead, “thank you so much for what you did”. “We are the adults,” she reminded the audience, and we have the responsibility to make change.