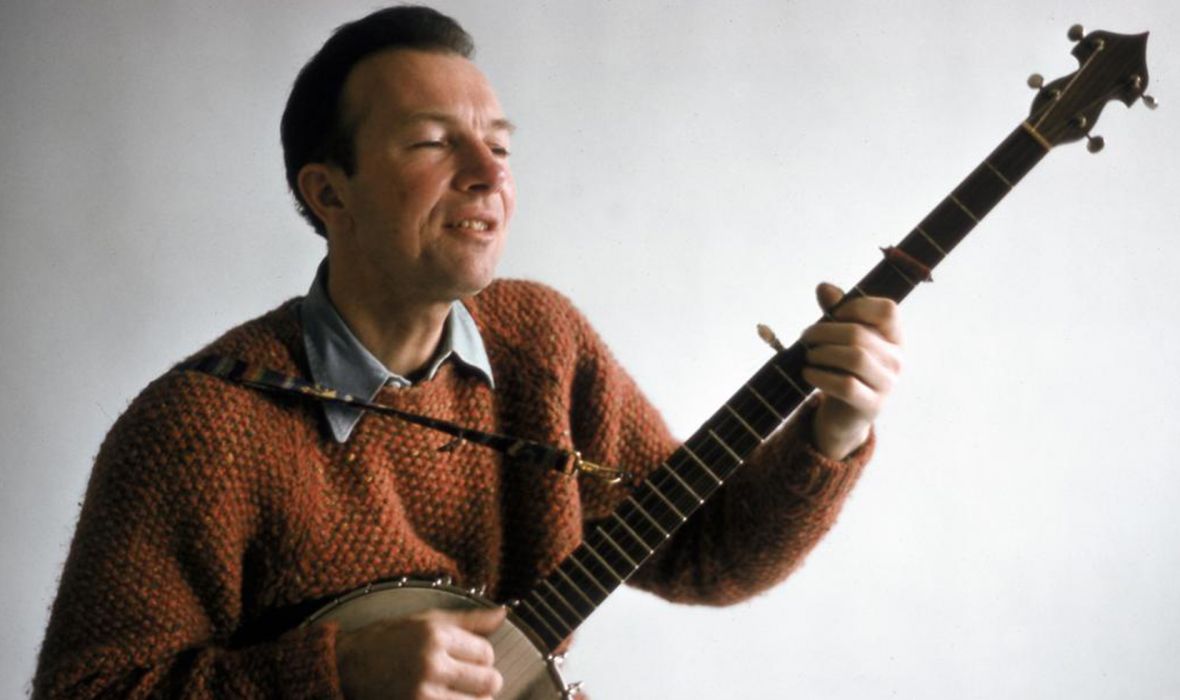 Kronos Quartet celebrate the music of Pete Seeger in Music for Change: The '60s - The Years that Changed America. Learn More >

Pete Seeger’s contribution to folk music, both in terms of its revival and survival, cannot be overstated.

With the possible exception of Woody Guthrie, Seeger is the greatest influence on folk music of the last century. Born in New York City, he was the son of musicologist Charles Seeger. He took up the banjo in his teens and in 1938, at the age of 19, assisted noted folk archivist and field recorder Alan Lomax on his song-collecting trips through the American South. He soon began performing on banjo, guitar and vocals.

In 1940 he formed a highly politicized folk trio, the Almanac Singers, who recorded union songs and anti-war anthems. They toured the country, performing at union halls for gas money, and recorded three albums. Woody Guthrie joined in 1941.

The Almanac Singers broke up with the advent of World War II. After a short stint in the army, Seeger formed the Weavers in 1948. They were a popular concert attraction who were at one point America’s favorite singing group. Their best-known numbers include such sing-alongs as “The Roving Kind,” “On Top of Old Smoky,” “Kisses Sweeter than Wine,” “Goodnight Irene” and “Wimoweh” (a.k.a. “The Lion Sleeps Tonight”). Their popularity cut across all boundaries. As American poet Carl Sandberg attested, “The Weavers are out of the grassroots of America. When I hear America singing, the Weavers are there.”

During the communist witch-hunts of the early Fifties, however, the Weavers were blacklisted, resulting in canceled concert dates and the loss of their recording contract with Decca Records. Under congressional subpoena to testify before the House Un-American Activities Committee, Seeger asserted his Fifth Amendment rights, scolding the committee, “I am not going to answer any questions as to my associations, my philosophical or my religious beliefs, or how I voted in any election or any of these private affairs. I think these are very improper questions for any American to be asked.” Unlike many entertainers and writers whose careers were ruined in the McCarthy era, Seeger stood his ground and persevered—even though he was sent to jail, albeit briefly, for defending his beliefs.

After leaving the Weavers in 1959, Seeger was signed to Columbia Records. He recorded prolifically for the label. His popularity hit a new peak with We Shall Overcome (1963), a live album recorded at Carnegie Hall that is estimated to have sold half a million copies. Seeger is responsible for such folk standards as “If I Had a Hammer” (originally written by Seeger and Lee Hays of the Weavers as “The Hammer Song”) and “Where Have All the Flowers Gone.” Seeger’s one dalliance with the pop charts came in 1964, when his version of folksinger Malvina Reynolds’ exercise in suburban mockery, “Little Boxes,” reached Number Seventy. Seeger’s songs were also popularized by others, principally Peter, Paul and Mary (“If I Had a Hammer,” “Where Have All the Flowers Gone”) and the Byrds (“Turn! Turn! Turn!,” “The Bells of Rhymney”).

Though he had objected to Dylan’s use of electric instruments at the Newport Folk Festival in July 1965, Seeger himself recorded with electric guitarist Danny Kalb (of the Blues Project) two years later on his album Waist Deep in the Big Muddy and Other Love Songs (1967). Seeger, with his outspoken commitment to the peace movement, often wrote directly or metaphorically of the Vietnam war in the Sixties. A tireless champion of causes, Seeger has devoted himself to environmental issues, particularly the cleanup of his beloved Hudson River.

In Seeger’s capable hands, from the Forties to the present day, a concert isn’t regarded as a one-way proceeding but a group sing-along. Indeed, Seeger’s gently assertive insistence that his audience sing out can be read as a larger metaphor for the necessary involvement of citizens to insure the healthy functioning of democracy in America. Seeger has recorded and performed tirelessly throughout his career, honoring the folksingers’ timeless commitment to spread the word and involve an audience. “My ability lies in being able to get a crowd to sing along with me,” he said in a 1971 interview. “When I get upon a stage, I look on my job as trying to tell a story. I use songs to illustrate my story and dialogue between songs to carry the story forward.”