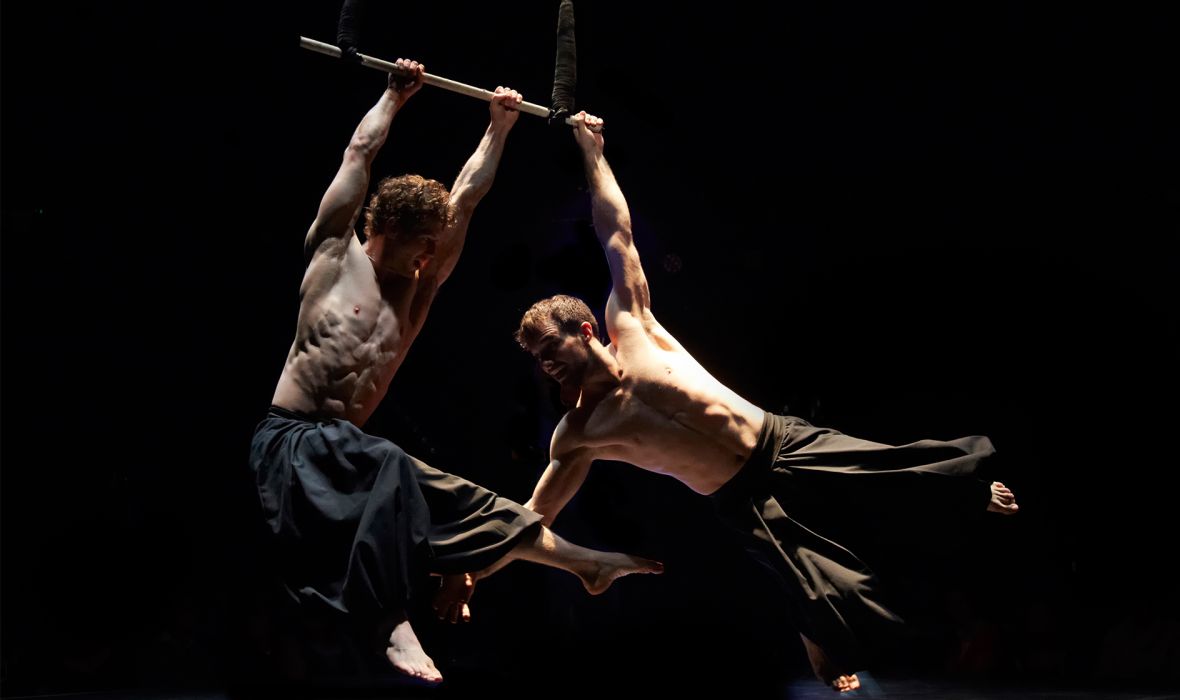 They are fearless and anything but predictable.

They fly through the air and spring across the stage. They swing from trapezes and dangle from above. They perform extraordinary feats of balance and agility, these three figures — one female and two males — who seem to defy the limits of physical possibility.

And if that isn’t enough, they succeed in turning motion into emotion, drawing their audience into an engrossing world of humanity and feeling.

Australia-based Circa has been called an ensemble company of artists at the forefront of contemporary circus arts. In the past 15 years they have performed in about 40 countries around the world.

The show “What Will Have Been” is their first performance in Connecticut, happening Wednesday, June 12, at University Theatre as part of the Elm City’s International Festival of Arts & Ideas.

Performed on a bare stage in the round, the 70-minute presentation of extreme physicality and subtle characterization seeks to push the boundaries of the circus genre to create an art form with a sensibility all its own.

Notes Kimberley O’Brien, a member of the troupe, “We are hired as acrobats. We may come together with different skills, but basically you are seeing acrobats.”

Daniel O’Brien points out, “We come up with themes and ideas which we create and physicalize on stage.”

In addition to the married O’Briens, the ensemble consists of acrobat Hamish McCourty. They are accompanied by violinist Lachlan O’Donnel and a fusion of the music of Bach, Philip Glass and electronica. The artistic director is Yaron Lifschitz.

After a brief prologue, the performance unfolds with a violin solo that becomes the backdrop for the opening segment in which a sole female performer intertwines with and weaves her body in and out among the twists and turns of a suspended rope.

The mood then changes with a series of duets and trios in which the three performers work as a group in joyous, romantic, humorous and touching arcs of bodies and relationships. They barely touch or they are strapped together. They fling each other or they hold on tightly. They vault across the stage or they blend as one. Sometimes there are moments one is unsure where one body begins and another ends.

Part of the show’s appeal is forging meaning and impact between performers and audience.

Says Daniel O’Brien, “The main things we are playing with are memory, people missing and far away from us, as well as connections close to us at the moment. The relationships evolve over time.

“The audience is important,” he says. We perform a more abstract narrative. We don’t tell all. Are we lovers, friends, fathers and daughter? People bring in their own experiences in life and see what it is they see on stage. The audience takes from it what they get and interprets it.”

In order to maintain the high level of performance, the performers are determined to keep it in the moment, always open to improvisation and re-creation on stage.

Daniel O’Brien notes, “There are some things set in stone. Some have room for interpretation to keep it fresh for both ourselves and our audience.”

Push and pull, darkness and light, silence and sound, stillness and movement, “What Will Have Been” blurs the lines between movement, dance, theater and circus, becoming an evocative narrative of physical and emotional resonance.

In addition to the performers in New Haven, the Circa ensemble includes about 14 other acrobats. They are broken down into separate groups that perform an active repertoire of about six different shows worldwide.