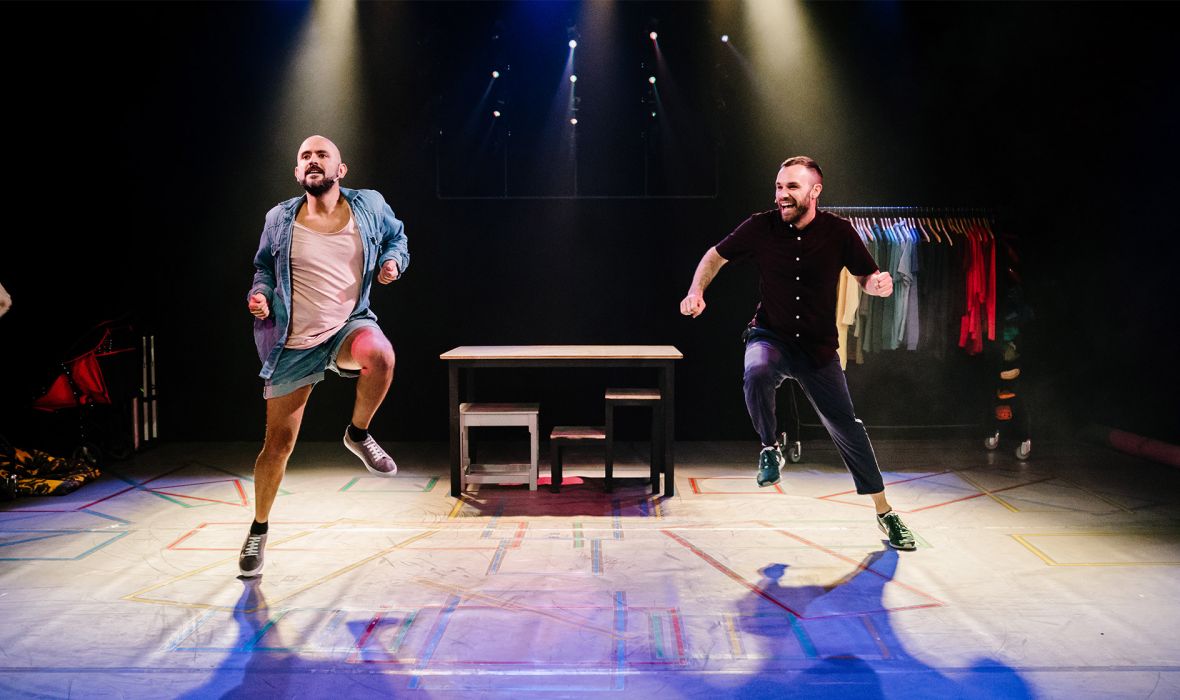 To parent, or not to parent? That is the question.

That’s also the distillation of “No Kids,” a two-character play running Wednesday through Saturday, June 12-15, at Iseman Theater as part of the International Festival of Arts & Ideas.

“It’s about dreams and fantasies, and imagining the joys and difficulties one might experience when having kids,” said Nir Paldi who, with George Mann, wrote, directed and performs in “No Kids.”

“It’s about the process of us trying to decide whether we should have them or not,” Paldi said. “And if so, how?”

“No Kids” is the latest in a long line of adventurous pieces created by Mann and Paldi for Ad Infinitum, a theater company based in Bristol, England. Both Mann and Paldi are co-artistic directors of Ad Infinitum, which Mann founded 12 years ago after studying at the École Internationale de Théatre Jacques Lecoq in Paris. In fact, the British-born Mann met Paldi, who hails from Israel, at Lecoq.

The pair officially married last year and have wrestled with the idea of having children. Right about the time Mann and Paldi conceived their theater idea.

“Nil is the one with the light-bulb moment,” said Mann. “For years, he was saying, like, ‘when are we going to have kids?’ And I was scared a little bit.

“About three years ago, he had this idea,” Mann continued. “‘Oh, my God! We can direct this piece about looking at whether we should have kids or not!’ And I was like, ‘what-this? On stage? Are you crazy?’

What ultimately endeared Mann to the idea was telling the couple’s story through “the lens of a same-sex couple.”

Mann and Paldi examine the possibilities available to them, including adoption and surrogacy. They also consider the sure bet that any of their progeny will catch an earful of disparagement from their less open-minded peers, to say the least. In addition to drawing on their own experience of the Baby Chase, Mann and Paldi also culled experiences from friends about adoption, surrogacy, of losing a child and divorce.

Mann and Paldi’s training at Locoq provided them with similar “tool kits,” as Mann called their mutual skill sets.

“The training is rooted in the body,” Mann said, “so everything comes from the same place. We see it as less of a style and more of the tools you’ll need in order to create a piece of theater.

“We use a lot of movement, of gestures, and combine it with text,” Man said. “We challenge ourselves to do something different every time.”

Paldi added that their training “also allows you to create something playful and organic.

“We make something out of nothing,” Paldi said. “It’s always connected to reality and grounded.

As often occurs in artistic collaborations, Mann and Paldi often complement each other’s personality, yet lock horns when both feel equally passionate about one choice over another.

Paldi said that many people warned them that working together in close quarters as a married couple could “destroy” them. So far, so good.

“It’s very much like having kids,” Paldi said of their artistic collaborations. “It’s like a baby we raised from the start.”

Mann and Paldi also ask the designers, performers and others at Ad Infinitum to look in on their work to proffer helpful feedback.

“They give us guidance to flesh out material,” Mann said.

Ultimately, “No Kids” comes back to the would-be parents’ relationship, both Mann and Paldi agreed.

“In the play, we were very interested in how this extremely difficult life decision is driving the two characters apart,” said Paldi. “So the play follows the relationship through the difficult choices and fears, and very powerful love that can cause pain as well.

“Trauma from the past drives them as they are trying to make the decision, and drives them apart when they don’t necessarily see eye to eye,” So, yeah, I think there’s a lot about partnership and love and creation. I think the play is essentially about creation.”

Mann said that developing “No Kids” brought about self-discovery.

“I think Nir has always had a firm grip on both his desire to have children and how he feels about it,” said Mann. “I think I’ve been dodging the question, and dodging everything, really.

“For me, it was really a difficult process to dredge up the past,” he said. “I hadn’t expected that. Also to realize that it wasn’t that I didn’t want to have children,” Mann continued. “I was just terrified for a lot of reasons. Some have to do with my sexuality and my past. Some from just not knowing.”

Once Mann overcame his fear, he appreciated a really deep connection to wanting to have kids, he said. “I realized it’s something I’d really love to do, but I was really scared of it.”

Paldi said that, based on feedback from audience members, “No Kids” resonates with all walks of life.

“It seems to take people to a very personal moment in their lives, whether or not they are a parent, gay or straight,” Paldi said. “Everybody somehow connected with the show.