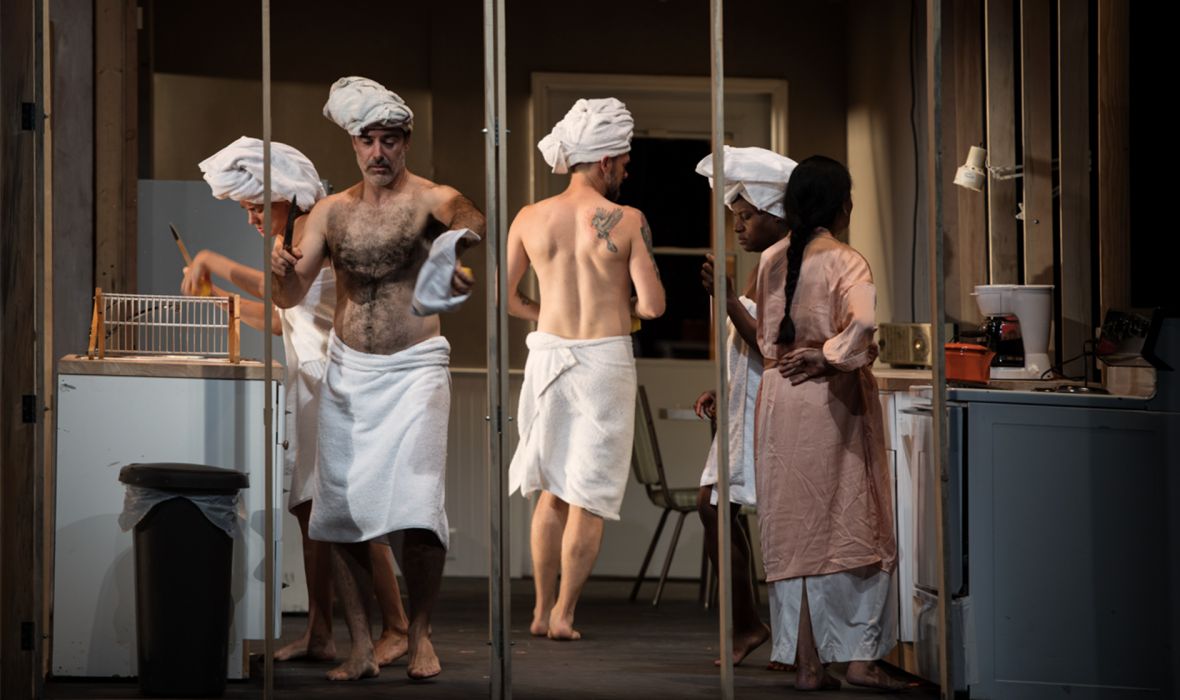 “Home” is an art installation about a seemingly humdrum concept — hanging around the house — that happens to have been created by someone with a deep-rooted desire to entertain, enlighten and excite.

“Home,” the last major ticketed event of the 2019 International Festival of Arts & Ideas, happens June 19 to 22 at the Yale University Theatre. More information and tickets for HOME >

During the course of the 90-minute performance, a house is built onstage, then moved into and fully lived in — by actors and musicians who travel with the piece, but also members of the audience. There are also special effects, and live music performed by the folk rocker Elvis Perkins.

Arts & Ideas director of programming Chad Herzog, who experienced “Home” twice before arranging to bring it to New Haven, calls it a deeply moving experience.

“It speaks to New Haven today," he says. “This city is the home of so many people who’ve been here for generations, and those who come for just a few years as students, as well as those who come through JUNTA or IRIS and know it is a sanctuary city.

“What’s beautiful about ‘Home’ it’s about what makes being home hard for us too. You see people come together, then grow apart. It’s starts with nothing onstage, then you’re living there.”

Geoff Sobelle developed “Home” for the Brooklyn Academy of Music’s influential Next Wave festival in 2017.

“I wasn’t headed in this direction in terms of where my work is right now,” Sobelle says during a phone chat from Cancun, where he’s punching up some clown routines for a Cirque du Soleil show there. “But it was a commission from BAM, and I was never going to turn that down."

Describing the show as “the life story of a structure," Sobelle explains that “Home” is “my concept, and I’m the lead artist, but it’s very collaborative. The director is Leigh Sunday Evans [the busy off Broadway director who also did the dark Southern drama “Miller, Mississippi” at the Long Wharf Theatre this past December]. In a way, I’m kind of the writer, but this is not a play. It’s a performance-art work, and dance theater, but with a lot of magic. Or is it an Elvis Perkins concert with a house onstage?"

“Home,” Sobelle says, "is not following a story or clear characters. We wanted to make something that would resonate with the audience.

"Ultimately, it’s about you. It’s about things that happen in your house, privately and publicly. You start as a voyeur, then you’re on the inside looking out. You experience class, micro culture, gender, race. You look at people differently.

“This is about several things at once, but one of those things is joy. If I have to be political with it, I’m hoping to bring people together through joy. I believe in art that is entertaining but deployed for a purpose. It should challenge you, and totally entertain you."