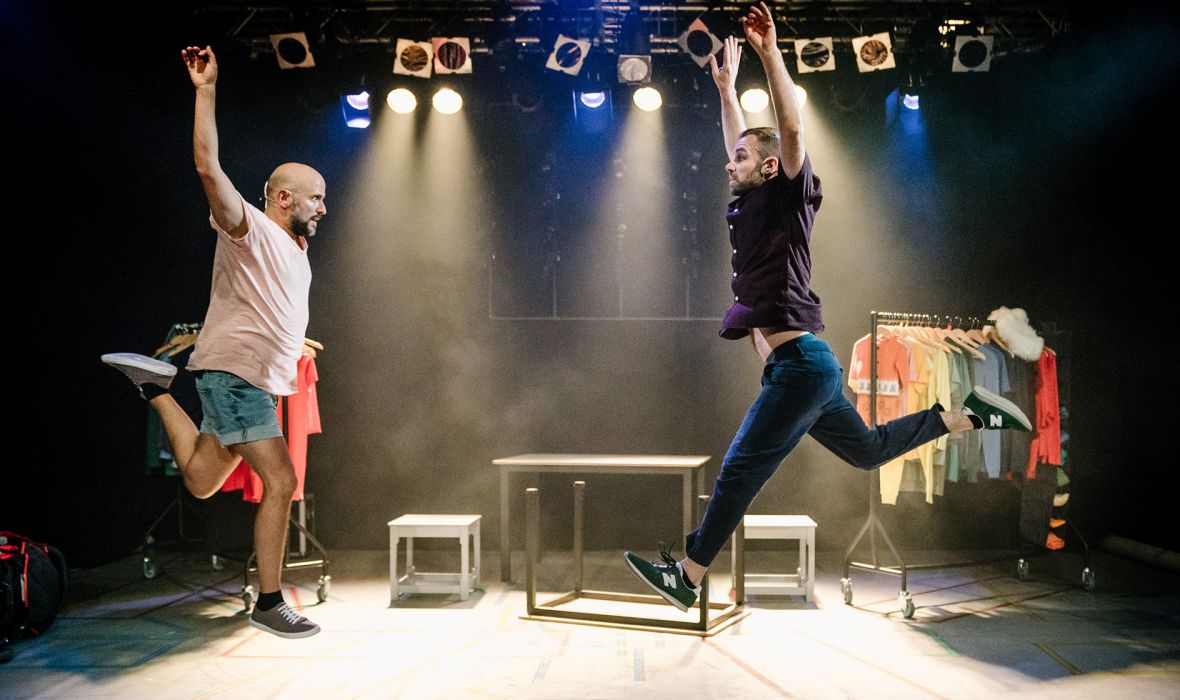 There may be couples as meticulous and thorough when considering parenthood as Nir Paldi and George Mann do in their quick-paced performance of “No Kids,” running through Saturday at Iseman Theater as part of the International Festival of Arts & Ideas. Yet few do so with as much vim, veracity and imagination as Paldi and Mann.

“No Kids,” a rivetingly seamless piece the couple wrote (and directed, as well), is a physical and artistic achievement for this dynamic duo as they roll out everything but a big brass band to illustrate points and keep the story visually, aurally and intellectually interesting. Both Paldi and Mann, a married couple on stage and off, are alums of the highly regarded École Internationale de Théatre Jacques Lecoq in Paris, where physical storytelling is paramount. Paldi and Mann rarely sit still as they play several characters throughout, even trading on and off with each as characters in the same scene. They dance, rap, stroll a baby carriage, change costume pieces and lip-sync to Madonna at a dazzling pace.

“No Kids” opens with Paldi and Mann tautly face to face, squared off in each other’s eyes. They appear deadlocked in silent gaze sufficient to raise tension before the performance shifts into musical vaudeville in which Paldi and Mann are their own pit orchestra, replacing strings, brass and reeds with words and flexible limbs.

As “No Kids” is decidedly presentational, Paldi and Mann directly address their audience as themselves and proceed to zip through vast research and exposition with pared down patter complemented by their fluid yet specific physicality. Then, with no more illustration than a light cue, each instantly becomes a physician, a social worker, a potential surrogate, their hypothetical child and themselves as children to act out sketches.

These scenes anchor the performance. Here Paldi and Mann start and often finish critical moments in their present life, hypothetical future and haunting pasts. The tone of these scenes flows from giddy anticipation to justified doubt throughout the 65-minute performance. The sketches portray the couple’s investigation of first surrogacy and then adoption. They explore the pros and cons of both scenarios, calling upon professional experts, friends and their own memories. They seriously study the implications of what bringing a child into the world has on Mother Earth. They visualize the joys of doting over their toddler, the anxiety of being the only same-sex parents in their son’s class, and a raging teenager spewing verbal homophobia in their faces.

Paldi and Mann also confront their own relationship on this journey. Do they both want a child with equal passion? Do they share doubts? Does one partner want a child dangerously more than the other? The would-be parents start each discussion reasonably but often enough their discourse grows dour, stirred and shaken by the institutionalized social assault that each has endured since childhood.

Observing Paldi and Mann bare their deepest wounds so baldly strongly suggests that few of us consider the consequences of our actions as nearly as we should. It also proves that, like many clowns, Paldi and Mann are genuinely good actors. Just as each knows precisely how far to press for laughs, they both intuit how to play against obvious or disingenuous pathos. These guys are not just clowns.

Though by no means a traditional musical, “No Kids” greatly benefits from Chris Bartholomew’s sound design and musical composition, which is conspicuous only for its subtle, ironic wit and aptness of musical punctuation. Matt Leventhall’s light design and Anna Orton’s sparse set and plentiful costumes support the production perfectly.

“No Kids” is a delightful breath of fresh air and one you’ll not likely encounter again in these parts for a spell. It’ll make you forget that you have a cellphone, for an hour at least.