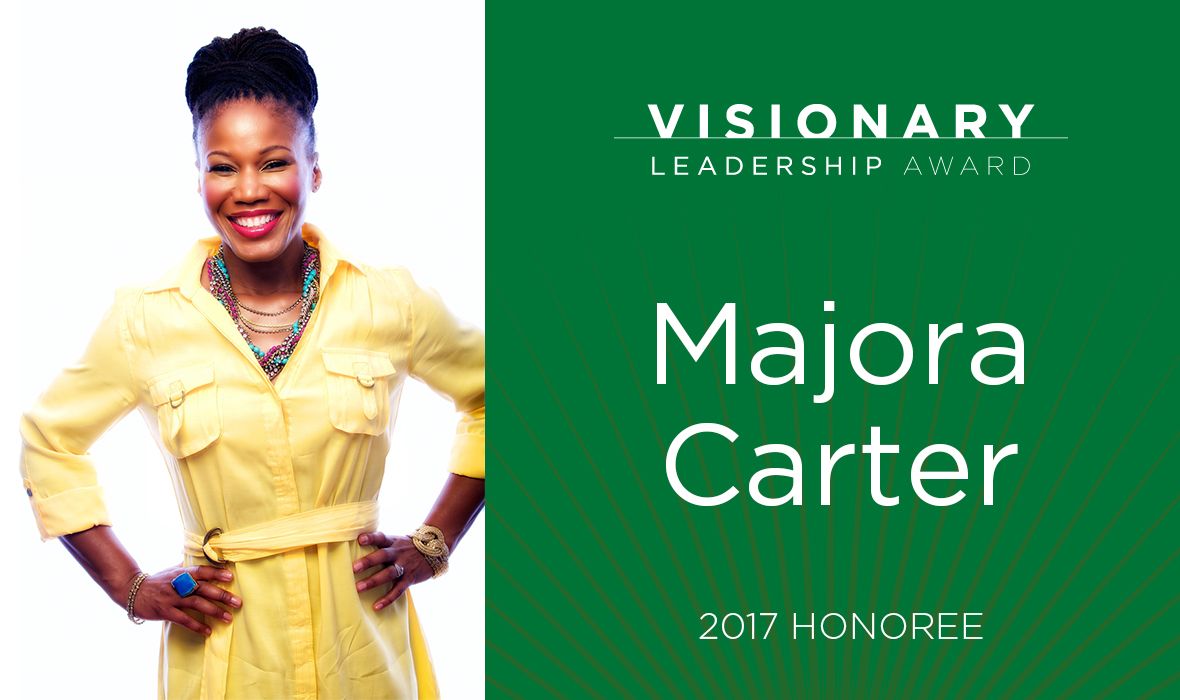 The Award Luncheon, which will be moderated by Dena Simmons, Director of Education at the Yale Center for Emotional Intelligence, draws over 400 attendees from across the region and raises money for the Festival's diverse roster of programming presented in June each year. The award which was established in 2010 in honor of Festival co-Founder Jean M. Handley, is awarded to a Visionary Leader whose trailblazing work is impacting the world. Ms. Handley provided thoughtful and effective leadership as a lifelong champion of many of the region’s arts, cultural, social, and educational organizations. She was a role model for women, a person of extraordinary wisdom, and an individual of exceedingly high standards who was generous with her talent and time.

“For two decades the Festival has been a haven for artists and thinkers to illuminate important issues in our world and inspire us to consider our own role in response. Majora Carter's Ideas discussion electrified Festival 21 attendees,” said Mary Lou Aleskie, Executive Director of Arts & Ideas. “What makes Majora extraordinary is her ability to see hope and promise where others see only challenges and - as she’s done in the fields of technology, the environment, and economic development - empower individuals and communities to act upon that vision and bring about positive change for themselves”

The Festival’s Visionary Leadership Award honors a leader whose trailblazing work is changing the world, and connects the Festival's programs to everyday impacts on the community. Following the Award Luncheon, Majora Carter will receive the prestigious Poynter Fellowship in Journalism from Yale University, in partnership with the Yale Office of Public Affairs and Communication, and will participate in a conversation with Yale School of Architecture Dean Deborah Berke. The Poynter Fellowship events begin at 4PM in Hastings Hall (180 York Street, Paul Rudolph Hall) and is free and open to the public.

Majora embodies the American Dream. She has continually set new standards of excellence with projects in her South Bronx community, while expanding her reach nationally and internationally. Her philanthropic pursuits and business interests have all pointed toward greater self-esteem and economic potential for low-income people everywhere.

At Sustainable South Bronx, Carter deployed MIT’s first ever Mobile Fab-Lab (digital fabrication laboratory) to the South Bronx––where it served as an early iteration of the “Maker-Spaces” found elsewhere today. The project drew residents and visitors together for guided and creative collaborations.

After establishing Sustainable South Bronx and Green For All (among other organizations) to carry on that work, she opened a private consulting firm to help spread the message and success of social enterprise and economic development in low-status communities––which was named Best for the World by B-Corp.

Her work is characterized by an emphasis on talent-retention on the corporate and community levels. Clients include industry leaders in many fields, municipal and federal government agencies, and leading educational institutions across the US.

From this vantage point, Majora co-founded the now 750+ member Bronx Tech Meetup, as well as the StartUpBox Software Services company which is rebuilding the entry level tech job pipeline by using market forces and established business practices to help diversify the US tech sector. Clients include Digital.nyc, PlayDots, and GIPHY, among others.

Majora Carter has helped connect tech industry pioneers such as Etsy, Gust, FreshDirect, Google, and Cisco to diverse communities at all levels, and she continues to drive resources that value diversity into the communities left out of previous economic growth trends.

Majora is a graduate of the Bronx High School of Science, and an Advisory Board member of the Bronx Academy of Software Engineering High School . Her long list of awards and honorary degrees include accolades from groups as diverse as Rupert Murdoch’s News Corporation, John Podesta’s Center for American Progress, Goldman Sachs, as well as a MacArthur “genius” Fellowship. She is a BusinessInsider.com “Silicon Alley 100,” one of Goldman-Sachs “100 Most Intriguing Entrepreneurs,” and her 2006 TEDtalk was one of six to launch that groundbreaking site.

Majora is a Board Member of the Andrew Goodman Foundation. She has served as a judge for numerous prizes and competition including the NYC Office of Digital Media's "Reinvent Payphones Design Challenge." and the Roddenberry Prize.

The International Festival of Arts & Ideas is a year-round organization that culminates with an annual celebration of performing arts, lectures, and conversations each June in New Haven, CT. The 2017 Festival will take place June 10–24. The Festival convenes leading artists, thought leaders, and innovators from around the world for fifteen days of dynamic public programs to engage, entertain, and inspire a diversity of communities. More than 80% of Festival programs are free to the public, including events that feature some of the most influential jazz, classical, dance, and theater artists of our time. The Festival takes place in venues and open spaces in downtown New Haven, in the heart of the northeast corridor, two and a half hours south of Boston and ninety minutes north of New York City.

The Festival’s programs have an impact throughout the year and include additional performances, educational opportunities, and the annual Visionary Leadership Award. The Festival was established in 1996, by Anne Tyler Calabresi, Jean M. Handley, and Roslyn Milstein Meyer. They envisioned an annual celebration in New Haven—a city steeped in a rich array of cultural and educational traditions—distinguished from other arts festivals by its fusion of the arts with events centered on sharing ideas.

The Festival is presented with major support from the Connecticut Office of the Arts, Yale University, Key Bank, Comcast/NBC Connecticut, The City of New Haven, The Community Foundation for Greater New Haven, and the National Endowment for the Arts.
####
Facebook: /artidea | Twitter: @artidea | Instagram: @artsideasct | www.artidea.org