Home Events Ideas The Role of Artists in Democracy

The Role of Artists in Democracy 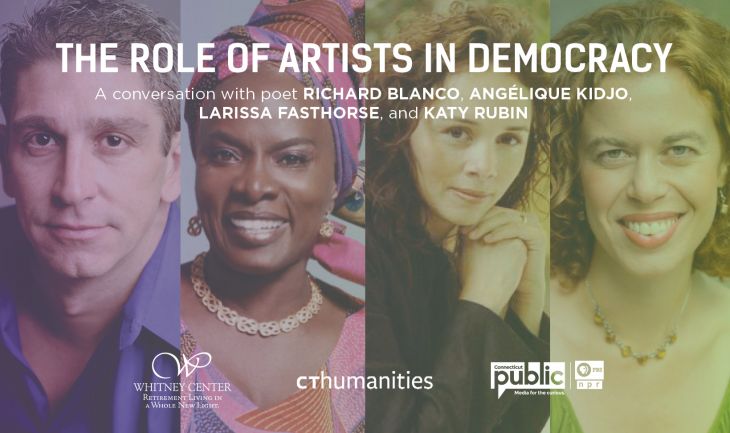 The 2012 Inaugural Poet Richard Blanco is joined by four-time Grammy Award winner Angélique Kidjo, Lakota playwright Larissa FastHorse, and Founder of Theatre of the Oppressed NYC and New Haven native Katy Rubin who reflect on their roles as mediators and responders during times of great social challenge.

Richard Blanco is the fifth presidential inaugural poet in U.S. history—the youngest, first Latino, immigrant, and gay person to serve in such a role. Born in Madrid to Cuban exile parents and raised in Miami, the negotiation of cultural identity and place characterize his body of work. He is the author of the poetry collections Looking for the Gulf Motel, Directions to the Beach of the Dead, and City of a Hundred Fires; the poetry chapbooks Matters of the Sea, One Today, and Boston Strong; a children’s book of his inaugural poem, “One Today,” illustrated by Dav Pilkey; and Boundaries, a collaboration with photographer Jacob Hessler. His latest book of poems, How to Love a Country (Beacon Press, 2019), both interrogates the American narrative, past and present, and celebrates the still unkept promise of its ideals. He has also authored the memoirs The Prince of Los Cocuyos: A Miami Childhood and For All of Us, One Today: An Inaugural Poet’s Journey. Blanco’s many honors include the Agnes Lynch Starrett Poetry Prize from the University of Pittsburgh Press, the PEN/Beyond Margins Award, the Paterson Poetry Prize, a Lambda Literary Award, and two Maine Literary Awards. He has been a Woodrow Wilson Visiting Fellow and received honorary doctorates from Macalester College, Colby College, and the University of Rhode Island. He has been featured on CBS Sunday Morning and NPR’s Fresh Air. The Academy of American Poets named him its first Education Ambassador in 2015. Blanco has continued to write occasional poems for organizations and events such as the re-opening of the U.S. embassy in Havana. He lives with his partner in Bethel, ME.

Four-time Grammy Award winner Angélique Kidjo is one of the greatest artists in international music today, a creative force with thirteen albums to her name. Time Magazine has called her "Africa's premier diva." The BBC has included her in its list of the continent's 50 most iconic figures, and in 2011 The Guardian listed her as one of their Top 100 Most Inspiring Women in the World. Forbes Magazine has ranked Angelique as the first woman in their list of the Most Powerful Celebrities in Africa. She is the recipient of the prestigious 2015 Crystal Award given by the World Economic Forum in Davos, Switzerland, the 2016 Amnesty International Ambassador of Conscience Award, and the 2018 German Sustainability Award.

As a performer, her striking voice, stage presence and fluency in multiple cultures and languages have won respect from her peers and expanded her following across national borders. Kidjo has cross-pollinated the West African traditions of her childhood in Benin with elements of American R&B, funk and jazz, as well as influences from Europe and Latin America. The French-Beninese singer is now reflecting on an icon of the Americas, celebrated salsa singer Celia Cruz. Kidjo’s album Celia (April 19 - Verve/Universal Music France) divests itself of the glamour to investigate the African roots of the Cuban-born woman who became the "Queen" of salsa.

Angélique also travels the world advocating on behalf of children in her capacity as a UNICEF and OXFAM goodwill Ambassador. At the G7 Summit in 2019, President Macron of France named Kidjo as the spokesperson for the AFAWA initiative (Affirmative Finance Action for Women in Africa) to help close the financing gap for women entrepreneurs in Africa. She has also created her own charitable foundation, Batonga, dedicated to support the education of young girls in Africa.

Larissa has had pilot scripts in development with Fox and TeenNick. She is represented by Jonathan Mills, Paradigm NY.

Katy Rubin is an artist and facilitator, working with cities across the US and internationally to develop and scale Legislative Theater: a participatory democracy process that’s joyful, creative, transparent and accessible. She's passionate about community-driven policy change to move the needle towards equity and justice.

Katy is the founder of Theatre of the Oppressed NYC, a nonprofit organization that partners with communities facing discrimination to spark transformative action through theatre. After 8 years as executive director, she stepped down to become a friend and fan of TONYC, motivated by the belief that change is both possible and necessary.

She is now focused on advancing the Legislative Theater methodology, which changed NYC policy and practice. #WatchActVote!

Lucy Gellman is editor of The Arts Paper, the editorially independent arm of the Arts Council of Greater New Haven. Prior to her time there she was a general assignment reporter at the New Haven Independent and station manager at WNHH Community Radio. She is a recovering academic and thinks the rustbelt is the greatest place in the world.