Home Events 2020 Ideas Democracy, Pandemic, and How We Move Forward

Democracy, Pandemic, and How We Move Forward 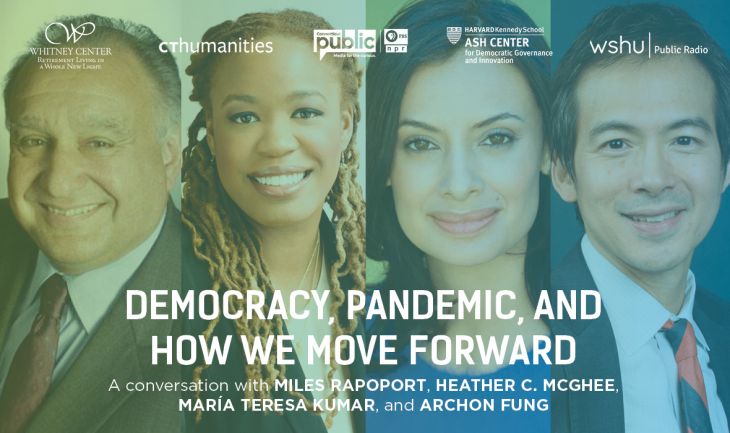 Former Connecticut Secretary of State Miles Rapoport moderates a conversation with political commentator and author Heather McGhee, political activist and CEO of Voto Latino María Teresa Kumar, and political scholar Archon Fung, all of whom have spent their lives working to strengthen our democracy. Together they will explore the question: Where do we go from here?

Miles Rapoport is a longtime democracy advocate who served as secretary of state in Connecticut, and president of both Dēmos and Common Cause. He is the Senior Practice Fellow in American Democracy at the Ash Center of the Kennedy School at Harvard and a member of the board of The American Prospect.

Heather Charisse McGhee is an American political commentator political strategist, currently a distinguished senior fellow and former president of Demos, a non-profit progressive U.S. think tank. McGhee is a regular contributor to NBC News and frequently appears as a guest and panelist on Meet the Press, All In with Chris Hayes, and Real Time with Bill Maher

María Teresa Kumar is a Colombian-American political rights activist and President and CEO of the Latino Political Organization, Voto Latino. Kumar was named by Elle Magazine in 2013 as one of the ten most influential women in Washington, D.C. and by Hispanic Business in 2017 as one of the 100 most influential Latinos in America.

Archon Fung is the Winthrop Laflin McCormack Professor of Citizenship and Self-Government at Harvard University. He directs the democracy programs and co-directs the Transparency Policy Project at the Ash Center at the Harvard Kennedy School. He has authored five books, four edited collections, and over eighty articles.