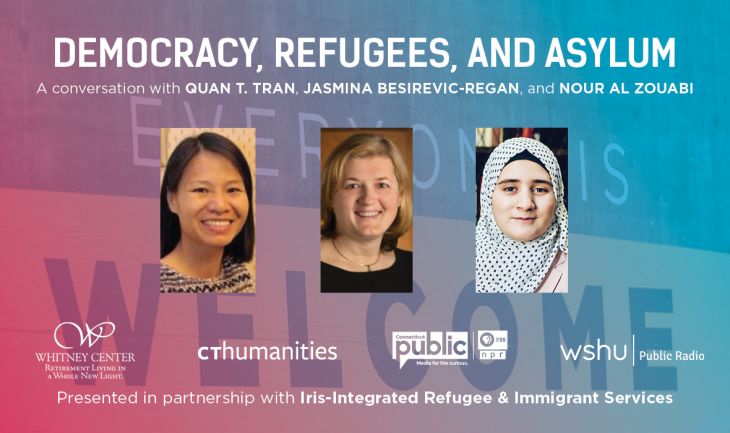 This event will be streamed live on Facebook, You Tube and here on our homepage.

Historian Quan Tran, sociologist Jasmina Besirevic-Regan, and Nour Al Zouabi, a Syrian refugee, share their personal stories and professional perspectives on borders, migration, and democracy. Bring your questions and curiosities to this interactive event with our partners at IRIS.

Jasmina Besirevic-Regan is the Dean of Trumbull College, and a faculty member in the Departments of Sociology, Global Affairs, and Ethnicity, Race and Migration at Yale University. She graduated from Augsburg College summa cum laude, a small liberal arts college in Minneapolis, MN, earning the Bachelor of Arts degree in Sociology. In 2004, she received her Ph.D. in Sociology from Yale having also earned the Master’s degrees here. Her dissertation on ethnic cleansing in the Bosnian city of Banja Luka focuses on the emergence of a Bosnian Muslim refugee community. Her teaching and research interests include genocide and ethnic conflict, identity, and nationalism. Her current work focuses on the Bosnian Muslim identity and disintegration of former Yugoslavia. She has presented papers on the sociology of genocide at a number of professional meetings and has been invited to speak at international conferences both at Yale and abroad. She is a member of the IRIS board.

Nour left Syria for Jordan in 2012 and then moved to the US with her parents and six siblings in 2016 and was welcomed by IRIS. She is a rising Sophomore at UConn majoring in physiology and neurobiology and minoring in chemistry, molecular and cell biology, and Arabic and Islamic civilizations.