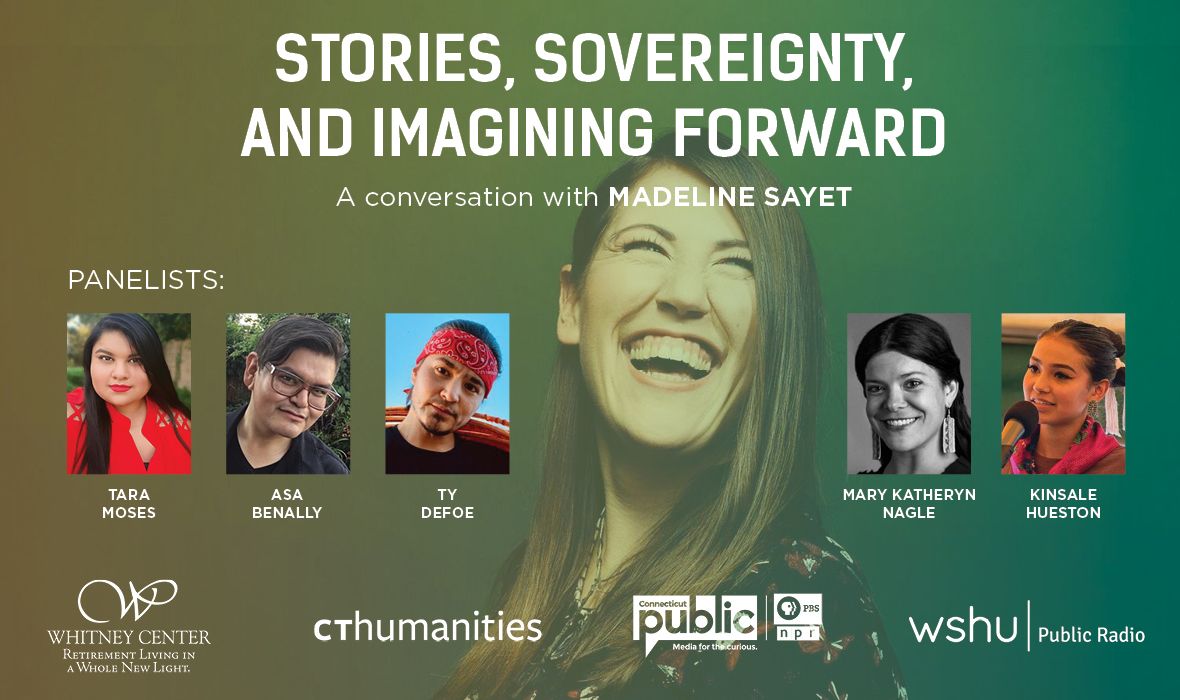 A member of the Mohegan Nation, Sayet is the Executive Director of the Yale Indigenous Performing Arts Program. She has been honored as a Forbes 30 Under 30 in Hollywood & Entertainment, TED Fellow, MIT Media Lab Fellow, National Directing Fellow, Drama League Director-In-Residence, and a recipient of The White House Champion of Change Award from President Obama.

She is a Cultural Capital Fellow with First Peoples Fund (2020); Invited Playwright with HBMG Foundation’s National Winter Playwrights Retreat (2020); fellow with the Intercultural Leadership Institute (2018/19); the Native Storytellers winner with the Yale Indigenous Performing Arts Program (2019); an observer with the SDC Foundation (18/19); fellow with the Intercultural Leadership Institute (18/19); member of DirectorsLabChicago (2018); member of the Directors Lab at Lincoln Center (2017); Senior Artistic Director Fellow, Allen Lee Hughes Fellowship at Arena Stage (2016/17); recipient of the Thomas C. Fichandler Award (2016); Management Fellow, Allen Lee Hughes Fellowship at Arena Stage (2015/16); affiliated artist with Unsettling Dramaturgy; associate member of the Stage Directors and Choreographers Society; and Dramatists Guild member. She holds a B.A. in Theatre from the University of Tulsa and is expected to attend Brown University/Trinity Rep as an M.F.A. Candidate in Directing in the fall of 2021.

Asa Benally was raised on the Navajo Reservation in northern Arizona. His grandmother, a traditional Navajo weaver and his father, a silversmith, fostered his love and appreciation for art and design.

He went to on to study at the prestigious Parsons School of Design in New York City. In 2016 he completed his M.F.A. in costume design at Yale University.

His design aesthetic is derived from an interest in history and strong individuals. He lives and works in New York City.

Ty Defoe is an Ojibwe and Oneida performance artist, activist, and writer living in New York.

Defoe grew up in Wisconsin in the Ojibwe and Oneida communities of his parents. Defoe identifies as two-spirit, a term used in many Native American nations to indicate gender fluidity, non-traditional gender roles, or queerness. He began his performative life as a toddler when he learned to hoop dance. Ty continues to hoop dance in his performances, along with eagle dancing, puppetry, and other various art forms. With Lakota playwright and choreographer Larissa Fasthorse, Defoe founded Indigenous Direction, a "a consulting firm that helps organizations and individuals who want to create accurate work by, for and with Indigenous peoples." Indigenous Direction's clients include The Guthrie Theater.

Mary Kathryn Nagle is a playwright and a partner at Pipestem Law, a firm specializing in tribal sovereignty of Native nations and peoples. She was born in Oklahoma City, OK, and is an enrolled citizen of the Cherokee Nation of Oklahoma. She currently serves as the executive director of the Yale Indigenous Performing Arts Program (YIPAP).

Kinsale Hueston is a 2017-2018 National Student Poet and a sophomore at Yale University. An enrolled member of the Navajo Nation, Kinsale’s work centers on personal histories, Diné stories, and contemporary issues affecting her tribe— particularly violence against Native women and settler-colonial violence, resource extraction, and land/body relationships. She began her career at the age of 15 as a theater artist in Los Angeles, with roles in Urban Rez by Larissa FastHorse (Sicangu Lakota) and Fairly Traceable by Mary Kathryn Nagle (Cherokee). She has since appeared in Running Shadow (The American Film Institute, 2018), ACKIA (Lenape Arts Center, 2018), numerous staged readings for the Yale Indigenous Performing Arts Program, and narrated Race to the Sun by Rebecca Roanhorse (Rick Riordan Presents, 2019)