Home Events 2020 Ideas On Being Good: A Conversation with The Good Place Philosophers

On Being Good: A Conversation with The Good Place Philosophers 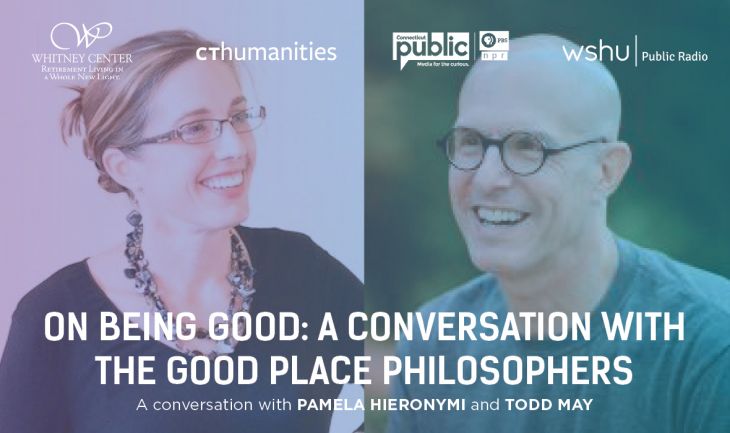 Philosophers Pamela Hieronymi and Todd May, who served as philosophy advisors on the acclaimed television comedy, The Good Place (NBC), explore the nature of goodness and its role in society, an especially poignant and visceral subject against the backdrop of the current public health crisis.

Pamela Hieronymi is a professor of philosophy at the University of California, Los Angeles. She is mainly known for her work in moral psychology.

Hieronymi earned her A.B. from Princeton University in 1992 and earned her Ph.D. from Harvard University in 2000. She has worked at UCLA since July 2000, where she was awarded tenure in 2007. She has presented her research widely, both nationally and internationally. In addition, she has appeared on Philosophy Talk public radio and her thoughts on technology and teaching were published by the Chronicle of Higher Education.

In 2010 she won the Frederick Burkhardt Residential Fellowship for Recently Tenured Scholars from the American Council of Learned Societies. She spent the 2011–2012 academic year as a Fellow at the Center for Advanced Study in the Behavioral Sciences at Stanford University.

Hieronymi served as an advisor on moral philosophy and ethics for the popular NBC sit-com The Good Place, and subsequently became a “consulting philosopher” for the show; "surely a first in sitcom history." Hieronymi guided the show to feature the work of her dissertation advisor, Harvard emeritus professor T.M. Scanlon, and also advised the writers on "existentialism and the famous thought experiment known as the Trolley Problem," among other topics. In the final episode, she appeared as a cameo alongside political philosopher Todd May.

Todd May is a political philosopher who writes on topics of anarchism, poststructuralism, and post-structuralist anarchism. More recently he has published books on existentialism and moral philosophy. He is currently Class of 1941 Memorial Professor of Philosophy at Clemson University.

Art academic Allan Antliff described May's 1994 The Political Philosophy of Poststructuralist Anarchism as "seminal", and credited the book with introducing "post-structuralist anarchism", later abbreviated as "post-anarchism". May has published works on major poststructuralist philosophers, including Gilles Deleuze and Michel Foucault. He also wrote books on more general topics accessible to the general reader, including Death, Our Practices, Our Selves, or, What It Means to Be Human, Friendship in an Age of Economics: Resisting the Forces of Neoliberalism, A Significant Life: Human Meaning in a Silent Universe, A Fragile Life: Accepting Our Vulnerability.

May, along with Pamela Hieronymi, was a philosophical advisor to the NBC television show The Good Place. Together they appeared as cameos in the final episode.