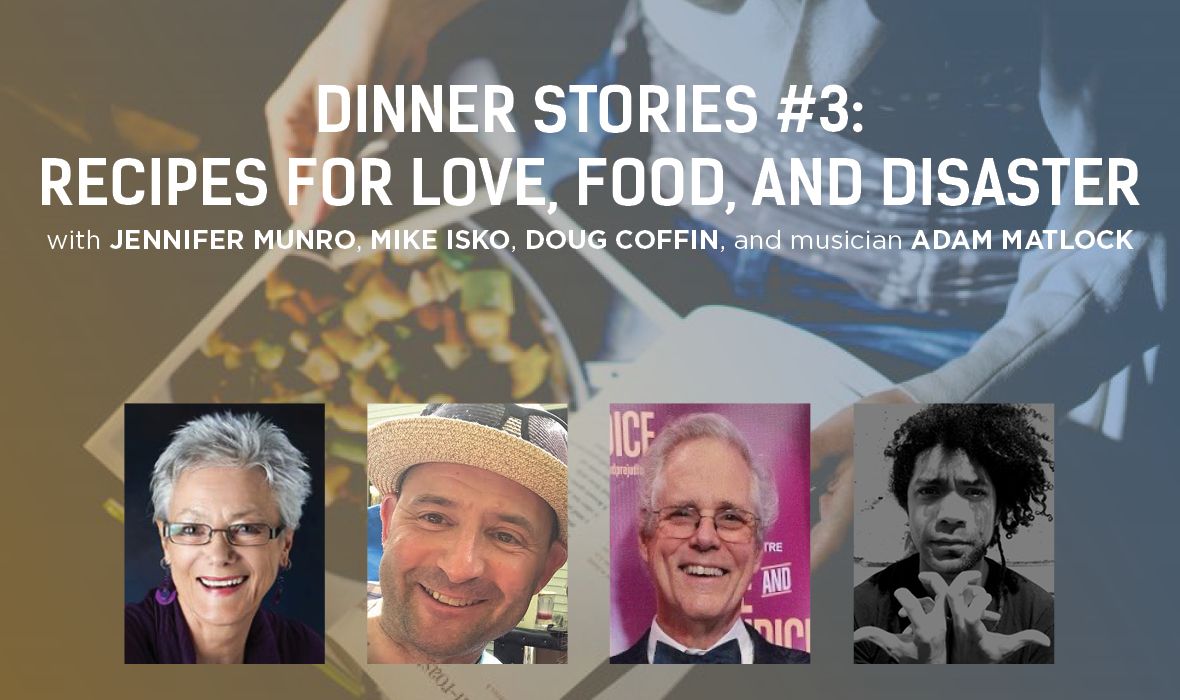 Recipes for Love, Food, and Disaster

Join skilled storytellers as they tell tales of Love, Food and Disaster. Begin with Doug Coffin's aptly named "Recipe for Disaster" as your appetizer, then join Mike Isko as a hearty main course. Dive into dessert with Jennifer Munro's Just an Ordinary Christmas with a delightful sprinkle of music by Adam Matlock as a special treat.

Before you sit down, settle in, and prepare for story time, give one of these restaurants a call. After all, you can't have dinner stories without dinner!

Acclaimed storyteller, Jennifer Munro creates original stories that resonate with the frailty and courage of the human condition. She has produced three award-winning CDs and a collection of short stories, Aunty Lily and other Delightfully Perverse Stories. Jennifer has performed at major storytelling festivals across the nation, most notably the National Festival, Tennessee, and the Timpanogos Festival, Utah.

Ever since he took a Beginner Storytelling course by Matthew Dicks in 2015, Mike Isko has been telling stories about his foibles and family. He is a veteran public defender, married father of two and a member of Sue Huggan's Story City Troup. Mike tells stories at the Buttonwood Tree Art Center in Middletown the first Friday of every month (when there is not a global pandemic). He has also participated in a number of SpeakUp Storytelling events at Saul Fussiner Songs and Stories and at the Next Door, New Haven.

Doug Coffin is the owner of Big Green Truck Pizza and a partner with Robin Bodak in Next Door Restaurant. He lives in Westville with his wife Kathryn Gould, a PA in Internal Medicine in New Haven and his two children Hallie Morris and Eric Coffin-Gould. He came to New Haven in 1972 to go to Yale. After two years he left Yale to begin a career in the food business, first at the New Haven Food Co-op, then as a caterer and office cook for Cesar Pelli and Associates.

Adam Matlock works as an accordionist, composer, vocalist, and educator living and working in New Haven, CT. Matlock writes songs under the name "An Historic", building narratives accompanied by musical inspirations from Balkan music and Klezmer, Soul, and various strains of rock. "An Historic" exists as a solo project, but is reinforced live and on record with the members of Dr. Caterwauls Cadre of Clairvoyant Claptraps, a folky/jazzy band adding trombone, fiddle, banjo and accordion to the standard rock instrumentation of guitar, bass, and drums. He also composes under his own name, most notably the opera Red Giant(2014) for 6 piece ensemble and three singers, and Earthseed Songs (2012) for voice and two instrumentalists. Matlock also began to expand his role as a performer in 2009, playing original music and interpretations with projects including "An Historic", "Broadcloth", "Gzara", and "Dr. Caterwaul's Cadre of Clairvoyant Claptraps". He has recorded, performed, or improvised with artists including Anthony Braxton, Mario Pavone, Ceschi, Vinny Golia, Sigh, and Clara Engel, and works as a group and private teacher in the New Haven area.