Housing as a Human Right? Tackling Challenges of Affordability and Discrimination 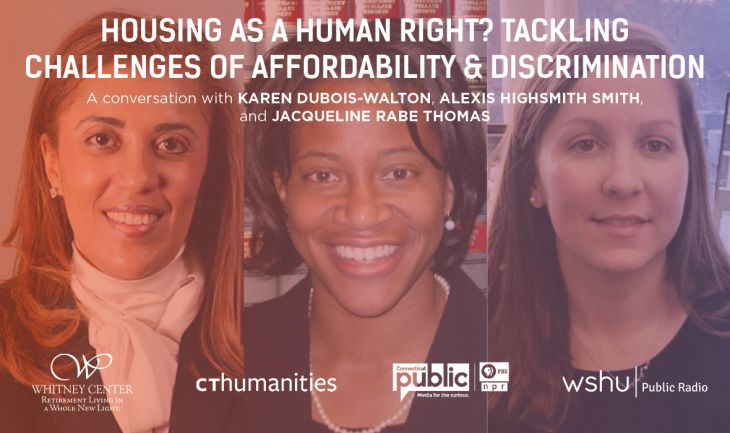 Karen DuBois-Walton currently serves as the Executive Director of the Elm City Communities/Housing Authority of the City of New Haven, President of The Glendower Group, LLC (the development affiliate of ECC/HANH) and President of 360 Management Group, Co. (the property management affiliate of ECC/HANH) responsible for administrative, programmatic and policy direction of the public housing, housing choice voucher program, low income housing tax credit program, finance and planning and development activities. Prior to assuming this role, Dr. DuBois-Walton served as the Chief Operating Officer for HANH. Previously, she served as Chief of Staff and Chief Administrative Officer for Mayor John DeStefano, Jr. in the City of New Haven, CT. A trained clinical psychologist, prior to assuming positions with the Housing Authority and the City of New Haven, she served in positions with the State of Connecticut Department of Mental Health and Addiction Services and Yale University Child Study Center. Dr. DuBois-Walton earned her BA from Yale University and MA and Ph.D. from Boston University. She serves on numerous Boards and Commissions and is an active member of the New Haven community where she resides with her husband and two sons. In 2014 Dr. DuBois-Walton was named one of The Network Journal’s “25 Most Influential Black Women in Business.” In 2011 and 2013 she was named one of the “100 Most Influential Blacks in Connecticut” by the CT State Conference of the NAACP. In 2015 she was awarded the Greater New Haven NAACP’s Community Service Award.

Alexis Smith is currently the Executive Director at LAA. Alexis served as LAA’s Deputy Director from 2012-2017 and prior to joining LAA she was a staff attorney at Greater Hartford Legal Aid, where she practiced in the education and employment units. Alexis obtained her B.A. from Duke University and her J.D. from the University of Wisconsin Law School. Alexis is admitted to practice in Connecticut, the District of Connecticut and the U.S. Supreme Court. She has served as president of the George W. Crawford Black Bar Association and Secretary of the Connecticut Bar Association. She currently serves on the Board of Directors for Connecticut Center for Arts and Technology (CONNCAT), New Alliance Foundation, Discovering Amistad, Highville Charter School, The YMCA, and Elm City Internationals. In her spare time, Alexis enjoys running, refereeing youth soccer and basketball, and keeping up with her three small children.

Reporter for the Connecticut Mirror

Jacqueline Rabe Thomas is a reporter at the Connecticut Mirror.