Right to Play: Standing Up for Trans Athletes 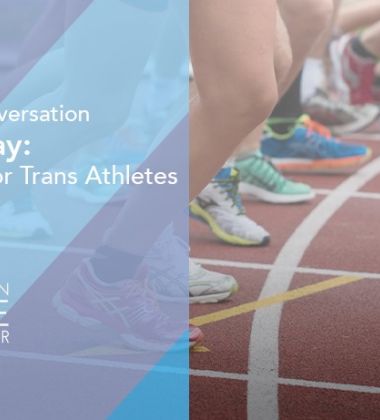 Join us for a conversation exploring the experiences of transgender athletes in recreational and professional sports. In light of the Justice Department's recent decision to exclude transgender athletes from sports in high schools, which is in direct opposition to Connecticut state law requiring that high school sports clubs be inclusive of individual students' gender identities, the New Haven Pride Center is excited to explore how sports can be inclusive of transgender athletes and debunk misinformation about inclusion creating unfair advantages. This event will be live streamed on YouTube and Facebook.

Karleigh Webb (she/her) is contributor to Outsports.com and a freelance television producer/reporter who has been in sports journalism for 25 years, including ESPN. She is also a crisis operator for Trans Lifeline and an organizer for the Party for Socialism and Liberation. She is also a competitive athlete as a runner, cyclist, multi event athlete and a softball player in the Southern New England Friendship League

Competitive weight lifter and manager of a Fortune 500 company

Jay Potter (he/him) is a Manager for a fortune 500 finance company, a full time MPH student at Goodwin University and a public speaker/ activist in the LGBTQIA community in Providence. He is a competitive powerlifter and has used his expertise to help establish guidelines for Trans* and Non-Binary competitors. Jay enjoys powerlifting, running, cycling, football, hockey, and strongman events. When he isn't getting physical on his sports teams he enjoys craft beer, and spending time with his pug puppy Dumbles. Jay’s passion is educating families, colleagues, and communities on providing love and support to gender non-conforming people especially athletes.

Raven Matherne (she/her, they/them) is a longtime endurance athlete and former professional martial artist holding 3 black belts. Of 23 Marathons, 6 Ironmans, 4 Ultra OCRs, 1 Ultramarathon (and smaller races), highlights include finishing the Boston Marathon, swimming to shore from Alcatraz, climbing the 48 4k ft peaks of NH, and finishing Ironman Texas barefoot. They are working towards a lifetime goal of finishing a marathon or longer in all 50 states.

Moderator / Board Secretary of the New Haven Pride Center

Lindsey Pembrooke (they/them), Moderator, is on the Board of Directors for the New Haven Pride Center, Hartford PFLAG and a key administrator of the 14,000+ person Non-Binary Gender Pride support group on Facebook. Lindsey was the featured interviewee for a four-part magazine series called "Coming Out", aimed at parents of LGBTQ+ youth. They are active in support groups around Connecticut, as well as a frequent panelist on transgender/non-binary issues. They freely admit their wife and kids are better athletes, even before transition.

Dr. AJ Eckert (they/them), Connecticut's first, out, non-binary Doctor, is the founder of The GLAM (Gender and Life Affirming Medicine) Center. Dr. AJ provides primary care, preventive care, PreP, osteopathic manipulation treatment, and gender-affirming services, such as hormone therapy and puberty blockers, to the LGBTQ+ community. They are currently telemedicine-only, due to the pandemic. Dr. AJ recently started their own YouTube channel, Queering Health with Dr. AJ, in order to spread knowledge and understanding of the LGBTQ+ community and relevant medical issues. They are also on the board of CTAC, Stonewall Speakers, and PFLAG. Dr. AJ became involved in inclusive, hands-on, Osteopathic medicine and decided to specialize in LGBTQ+ health after completing their education at Touro University College of Osteopathic Medicine and residency at NEOMEN/Maine Dartmouth Family Medicine Program-Family. They are board certified in Family Medicine and Osteopathic Manipulative Treatment.