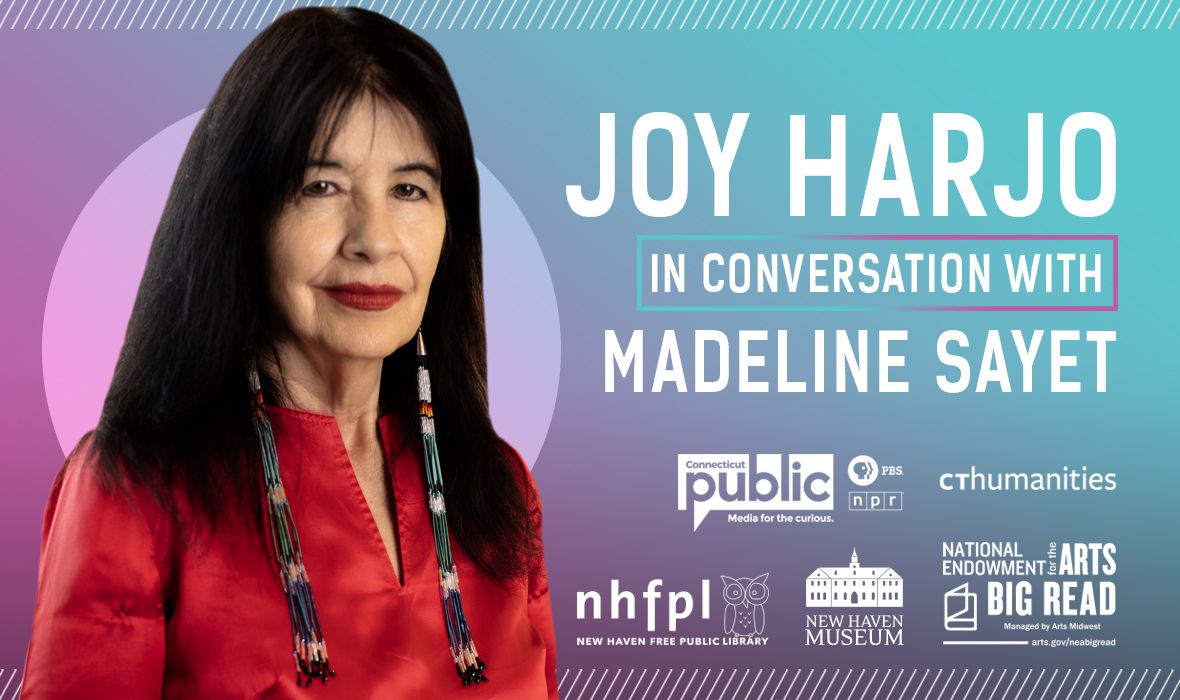 The International Festival of Arts & Ideas is honored to feature United States Poet Laureate Joy Harjo in conversation with playwright and director Madeline Sayet. Harjo, the first Native American Poet Laureate and a member of the Muscogee Nation, will reflect on her award-winning body of work, which includes nine books of poetry, two memoirs, and six music albums. With Sayet, a member of the Mohegan Tribe, she will focus on her acclaimed poetry collection An American Sunrise: Poems, the Festival’s selection for the 2021 NEA Big Read.

Harjo’s poems sing of beauty and survival, illuminating a spirituality that connects her to her ancestors and thrums with the quiet anger of living amid the ruins of injustice. A descendant of storytellers and “one of our finest—and most complicated—poets” (Los Angeles Review of Books), Harjo continues her legacy with An American Sunrise: Poems. In the early 1800s, the Mvskoke people were forcibly removed from their original lands east of the Mississippi to Indian Territory, which is now part of Oklahoma. Two hundred years later, Harjo returns to her family’s lands and opens a dialogue with history, confronting the site where her people, and other indigenous families, essentially disappeared. She interweaves her personal life with tribal histories to create a space for renewed beginnings.

“Joy Harjo reminds us that creative voice is both sustenance and a means to liberation,” says Festival Executive Director Shelley Quiala. “In An American Sunrise, she offers a complex and beautiful intersection of despair, abundance and renewal. In this intense time of change and reckoning, her voice provides a clear reminder that the interconnectedness of our past, present and future nourish our imaginations.”

Sign up for updates about this event and more 2021 programming!

Watch Joy Harjo reading her work at the Academy of American Poets on June 17, 2019.

Every year, the Festival partners with NEA Big Read to host a series of events focused on a single book as a point of departure for conversations throughout New Haven. An initiative of the National Endowment for the Arts in partnership with Arts Midwest, the NEA Big Read broadens our understanding of our world, our communities, and ourselves through the joy of sharing a good book. This summer, the Festival will partner with the New Haven community to offer free events highlighting the book’s themes; past events have included book club discussions, panel discussions, lectures, exhibitions, and poetry readings. This year’s programming will include Native Writers in Conversation, a panel discussion on New England’s rich Indigenous literary traditions, an Indigenous food workshop, and programming in partnership with the New Haven Museum and New Haven Free Public Library.

Joy Har­jo, the 23rd Poet Lau­re­ate of the Unit­ed States, is a mem­ber of the Mvskoke Nation and belongs to Oce Vpofv (Hick­o­ry Ground). She is only the sec­ond poet to be appoint­ed a third term as U.S. Poet Laureate.

Har­jo is the author of nine books of poet­ry, includ­ing her most recent, the high­ly acclaimed An Amer­i­can Sun­rise (2019), which was a 2020 Okla­homa Book Award Win­ner; Con­flict Res­o­lu­tion for Holy Beings (2015), which was short­list­ed for the Grif­fin Prize and named a Notable Book of the Year by the Amer­i­can Library Asso­ci­a­tion; and In Mad Love and War (1990), which received an Amer­i­can Book Award and the Del­more Schwartz Memo­r­i­al Award. Her first mem­oir, Crazy Brave, was award­ed the PEN USA Lit­er­ary Award in Cre­ative Non Fic­tion and the Amer­i­can Book Award, and her sec­ond, Poet War­rior: A Call for Love and Jus­tice, is forth­com­ing from W.W. Nor­ton in Fall 2021.

She has pub­lished two award-win­n­ing children’s books, The Good Luck Cat and For a Girl Becom­ing; a col­lab­o­ra­tion with photographer/​astronomer Stephen Strom; an anthol­o­gy of North Amer­i­can Native women’s writ­ing; sev­er­al screen­plays and col­lec­tions of prose inter­views; and three plays, includ­ing Wings of Night Sky, Wings of Morn­ing Light, A Play, which she toured as a one-woman show and was recent­ly pub­lished by Wes­leyan Press.

She is Exec­u­tive Edi­tor of the anthol­o­gy When the Light of the World was Sub­dued, Our Songs Came Through — A Nor­ton Anthol­o­gy of Native Nations Poet­ry and the edi­tor of Liv­ing Nations, Liv­ing Words: An Anthol­o­gy of First Peo­ples Poet­ry, the com­pan­ion anthol­o­gy to her sig­na­ture Poet Lau­re­ate project fea­tur­ing a sam­pling of work by 47 Native Nations poets through an inter­ac­tive ArcGIS Sto­ry Map and a new­ly devel­oped Library of Con­gress audio collection.

In addi­tion to serv­ing as U.S. Poet Lau­re­ate, Har­jo is a chan­cel­lor of the Acad­e­my of Amer­i­can Poets, holds a Tul­sa Artist Fel­low­ship, directs For Girls Becom­ing, an arts men­tor­ship pro­gram for young Mvskoke women, and is a found­ing board mem­ber and Chair of the Native Arts and Cul­tures Foun­da­tion. She lives in Tul­sa, Oklahoma.

Madeline Sayet is a member of the Mohegan Tribe in Connecticut, where she was raised on a combination of traditional Mohegan stories and Shakespeare. Both of which have influenced her work as a stage director of new plays, classics, and opera.

For her work she has been named a Forbes 30 Under 30 in Hollywood & Entertainment, a NCAIED Native American 40 Under 40, a TED Fellow,  MIT Media Lab Director's Fellow,, and a recipient of the White House Champion of Change Award from President Obama. She is the Executive Director of the Yale Indigenous Performing Arts Program (YIPAP). Within her field she has also been acknowledged as a 2019 Drama League Director in Residence, a member of the 2016 National Directors Fellowship Cohort, and is currently a member of Long Wharf Theatre's inaugural artistic ensemble. Her directorial work has been described by critics as effervescent, enchanting, magical, insightful, and fearless.

She received her BFA in Drama from Tisch School of the Arts, where she studied under the Atlantic Theatre Company. She has a MA in Arts Politics & Post-Colonial Theory from NYU's Gallatin School of Individualized Study, and a MA in Shakespeare & Creativity (with Distinction) from The Shakespeare Institute (Stratford Upon Avon, UK).

After finishing her studies at NYU, she received directing mentorship through a Van Lier Directing Fellowship at Second Stage Theatre,  and social entrepreneurship training as part of the first cohort of National Arts Strategies' Creative Community Fellows (where she now serves as a mentor), before going on to develop a national and international artistic career.

She has served on panels for the NEA, Mellon Foundation, Jerome Many Voices Fellowship, ART NY grants, as well as the Artistic Council for the O'Neill Playwrights Conference. Her writing has been published by TCG (Theatre Communications Group), Howlround Theatre Commons, University of Nebraska Press, and No Passport Press. She currently serves on the Board of Directors at NEFA, and Board of Trustees at the Eugene O'Neill Theater Center.