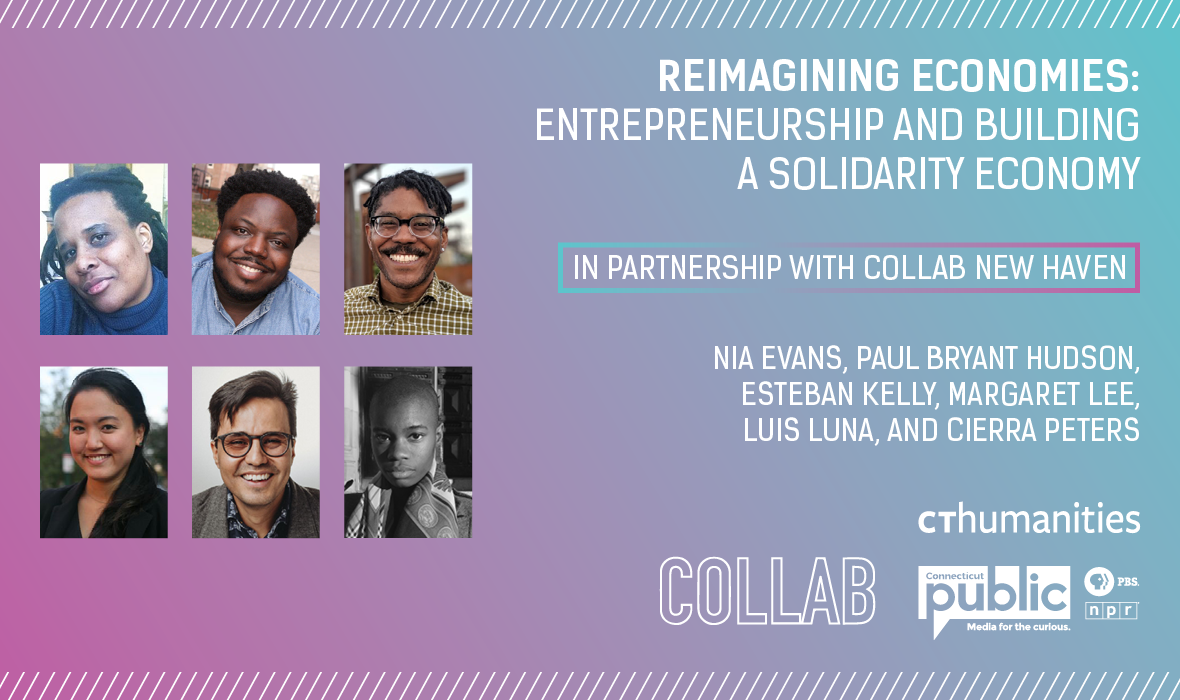 In partnership with Collab New Haven

"Ethical entrepreneurship" is a trendy phrase that demonstrates how ready consumers are for a people-centric shift in the marketplace. But how can budding entrepreneurs actually create communities of ethical care -- not just pay lip service to the concept?

Join us for this panel discussion on the role of entrepreneurship in supporting the larger movement of solidarity and mutual aid that is surging across America in response to increasing financial hardship, among other forms of struggle. In partnership with Collab New Haven, a community-centered accelerator for Connecticut entrepreneurs and project builders, this talk will be hosted by Margaret Lee, a Collab co-founder.

Nia Evans is the Executive Director of the Boston Ujima Project. Her educational background is in the areas of labor relations, education leadership, and policy. Her advocacy includes a focus on eliminating barriers between analysts and people with lived experiences as well as increasing acknowledgement of the value of diverse types of expertise in policy. She is a co-creator, along with artist Tomashi Jackson, of Frames Debate Project, a multimedia policy debate project that explores the intersection between drug policy, mental health services and incarceration in the state of Massachusetts. Ms. Evans has a B.S. in Industrial and Labor Relations from Cornell University and a Master of Arts in Education Leadership, with a course of study in Leadership, Policy, and Politics from Teachers College at Columbia University. She also studied abroad at the University of New South Wales in Sydney, Australia, where she focused on International Labor Relations

Paul Bryant Hudson is a New Haven based singer-songwriter. Grounded in cultural truth and identity, Paul actively channels energies from periods of BLACK cultural and creative enlightenment, fusing them with contemporary hip hop and soul components. These cultural values are prominent in his references and tributes to African American music, art, literature, and folklore.

Esteban Kelly is the Executive Director for the US Federation of Worker Cooperatives, and is an important leader and creative force in solidarity economy and co-op movements. He has served on numerous boards including the USFWC, the US Solidarity Economy Network, the National Cooperative Business Association (NCBA-CLUSA), and the Cooperative Development Foundation (CDF). He is a co-founder of the cross-sector Philadelphia Area Cooperative Alliance (PACA), and recently worked at the New Economy Coalition as Development Director and then Staff Director. Esteban is a mayoral appointee to the Philadelphia Food Policy Advisory Council, following eight years as a worker-owner at Mariposa Food Co-op institutionalizing its staff collective and expanding food access in West Philly.

Margaret Lee is a co-founder of Collab, an accelerator that supports Connecticut entrepreneurs — particularly Black, Latinx, and women entrepreneurs — in building small businesses and organizations that contribute to individual livelihood and community power. Before Collab, she was the Co-Director of Marketing at SeeClickFix, a New Haven civic technology startup and at the Yale Entrepreneurship Institute (now the Tsai Center for Innovative Thinking at Yale) where she managed Yale’s academic year and summer accelerators, seeing through more than 100 student and faculty ventures. She is the former Chair of the New Haven Innovation Collaborative and currently serves as Commissioner of the Economic Development Commission. She received the New Haven Biz Women in Business Award for her work.

Luis was born in Ecuador. Came to Connecticut at an early age and grew up undocumented in a multistatus family.

He co-founded the Semilla Collective of New Haven, a local grassroots organization that builds power and fights with immigrant families. He is also the host of Módulo Lunar, a three hour monthly program that serves as the stage to play alternative latinamerican music and that imagines and broadcasts abolitionist programing and radio resistance. He is also the senior organizer for the Connecticut Working Families Party, he focuses on legislative and issue based campaigns at the state and local level also helping and developing their grassroots base.

THE BOSTON UJIMA PROJECT is a Black-led, democratic, member-run organization building cooperative business, arts and investment ecosystem in Boston, with a mission to return wealth to working class communities of color. Ujima is bringing together neighbors, workers, business owners, investors, grassroots organizers, and culture-makers, to create a community-controlled economy in our city.