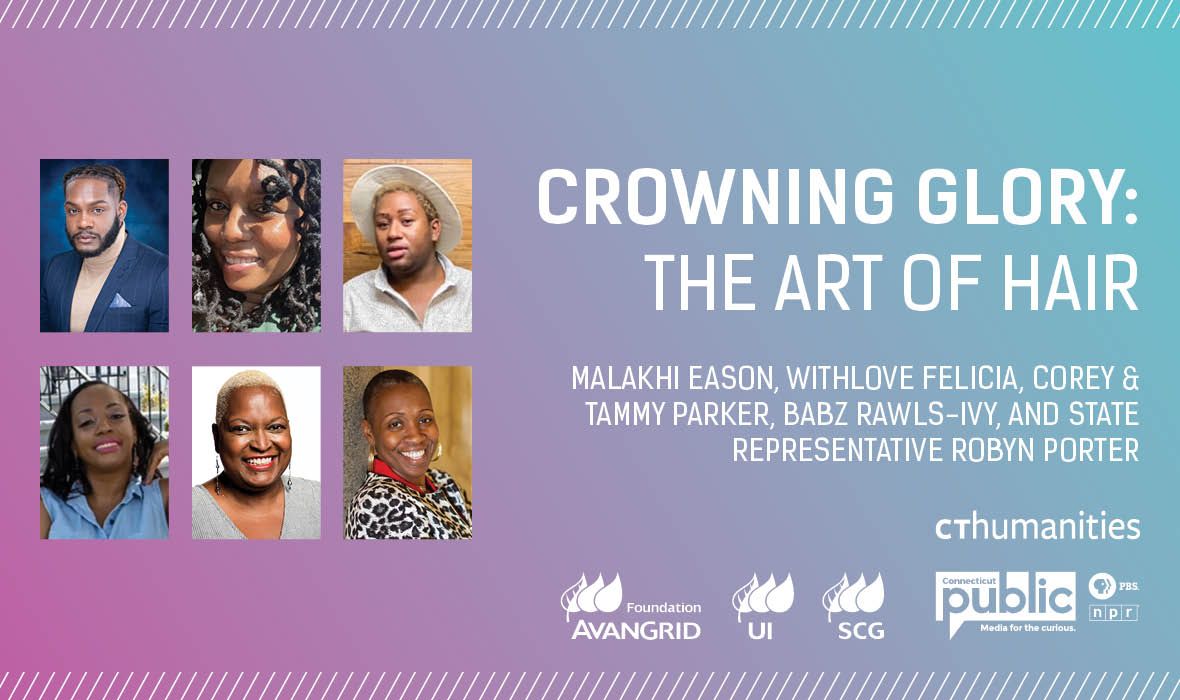 Crowning Glory: The Art of Hair

Celebrate the necessary and overdue passage of the Connecticut CROWN Act -- which prohibits workplace discrimination on the basis of traits historically associated with race, including hair -- with this joyous panel discussion. Malakhi Eason, the Festival's Director of Programming and Community Impact, will moderate a panel of community advocates, beauty experts, and multi-dimensional artists on topics ranging from the politics and art of hair to styling trends.

Host, Director of Programming and Community Impact for the International Festival of Arts & Ideas

Malakhi RL Eason II brings more than 15 years of arts administration experience to the Festival. Originally from Boston, Eason was most recently Programming Manager at Omaha Performing Arts, where he curated the expansive Jazz on the Green Series, ranging from intimate cabaret performances to outdoor concerts featuring artists like Ladama, Big Sam’s Funky Nation, Kim Waters, Sammy Miller and the Congregation, and Marcos y Sabor. Eason was formerly a background singer for touring artists while living in Los Angeles, CA.

A graduate of University of Bridgeport in Bridgeport, CT, Eason earned a Masters of Arts in Leadership from Grace University and is working on a Doctorate in Interdisciplinary Leadership from Creighton University, Eason has also served in many positions that convey his passion for service and youth mentorship; he encourages young people to find their passions.

In his free time, Eason loves to travel, write songs, eat at great restaurants, and spend time with family and friends.

Introducing "The Parkers", one of the strongest haircare duos in the beauty industry. Native to Connecticut, Tammy & Corey Parker are mother and son with over 30 years of combined hair experience. The Parkers specialize in various beauty areas ranging from haircare to skin care. Let's delve into these two creatives a bit more! Tammy Parker is a well-versed hair artist with over 30+ years of experience in the beauty industry. With strong roots in education (10+ years), Tammy has used her knowledge gained through both hands-on experience and educating the future hair artists of today to deliver exceptional cosmetology standards to each and every one of her appreciated clients. Tammy specializes in hair coloring, haircutting and overall haircare/maintenance. Tammy Parker is the Owner of Beautiful You Hair Salon in Wilton, CT. Tammy believes education partnered with passion is the key to success in this steady evolving industry. These same core values that Tammy holds dear she has instilled in her protege son, Corey Parker. Corey Parker is a renowned stylist with over 14+ years of experience in the beauty industry. Corey has been able to take his mother's extensive background in the beauty industry and partner it with his unmatched creativity; delivering unique/timeless styles to all of his appreciated clients. Corey specializes in both natural and chemical hair care, hair coloring, haircutting, extensions, locs and braiding. Corey works as an independent stylist/Owner of a private hair studio located in Derby, CT. With strong emphasis on hair care. Corey believes that healthy hair is the most important aspiration to have, and should be each of his client's hair goals. Corey Parker is also the Founder, CEO of CP Hair Care Solutions. A transformative hair care company that delivers high quality products at an affordable price for all clients of varying textures. With the help of his mother Tammy Parker they crafted an Organic group of products that would prove beneficial to all people with varying hair/scalp concerns. Note of Thanks: We are glad you chose to join us in discussing this field we hold so dear to our hearts. Remember anything you do, do it with passion! We invite you to start your healthy hair journey with our hair care tips at the forefront of your success!

B.S. in Marketing from Barber-Scotia College, a Historically Black College in Concord, NC.

State Representative Robyn Porter was first elected to the Connecticut House of Representatives in April 2014 following a special election. Since winning the 94th Assembly District seat, Porter has championed legislation that has provided fair wages and work spaces for Connecticut’s workers, reformed the state’s criminal justice system and increased protections for domestic violence victims. Porter has been a member of the both the Appropriations and Judiciary committees. She has authored and sponsored legislation that restores respect, dignity and fairer treatment for incarcerated women, prohibits a judge from setting bail for those charged with misdemeanors, outlaws the solitary confinement of minors, requires more data from prosecutors and strengthens transparency between law enforcement and the public.

At the beginning of her second full term in January 2017, Porter was named House chairwoman of the Labor and Public Employees Committee. Under her leadership, Connecticut workers have benefited from tremendous progress in the workplace.

• Championed legislation that strengthened gender pay equity laws, which had not been updated since 1963

• Led a nearly 8-hour debate that establishes the Paid Family Medical Leave Insurance Program, the most generous paid leave program in the country to date

• Championed the successful passage of the Creating and Open World for Natural Hair (C.R.O.W.N.) Act in 2021.

In her role as the co-chair of the Minority Teacher Recruitment Task Force, Porter has worked tirelessly on legislation to ensure that school boards employ at least 250 new minority teachers and administrators across Connecticut, and also helped to champion the passage of African- American and Latino studies in the public school curriculum.

Porter graduated from Gateway Community College with an Associate’s Degree and later obtained her Bachelor’s Degree in Criminal Justice from Charter Oak State College. She completed both programs with honors and was inducted into the Phi Theta Kappa International and the Alpha Sigma Lambda National Honor Societies. She was employed by the Communication Workers of America from 2001 to 2017, is a longtime community activist who served as co-chairwoman of the Steering Committee for the Newhallville Community Resilience Team (NCRT). During her tenure at NCRT, the committee focused on increasing public safety by building social cohesion. Porter is the proud parent of two adult children, Akeem and Aminah, and the spirited grandmother of Alana and Amir. She is a native New Yorker who has resided in New Haven, CT since the summer of 2000 and proudly calls it home.