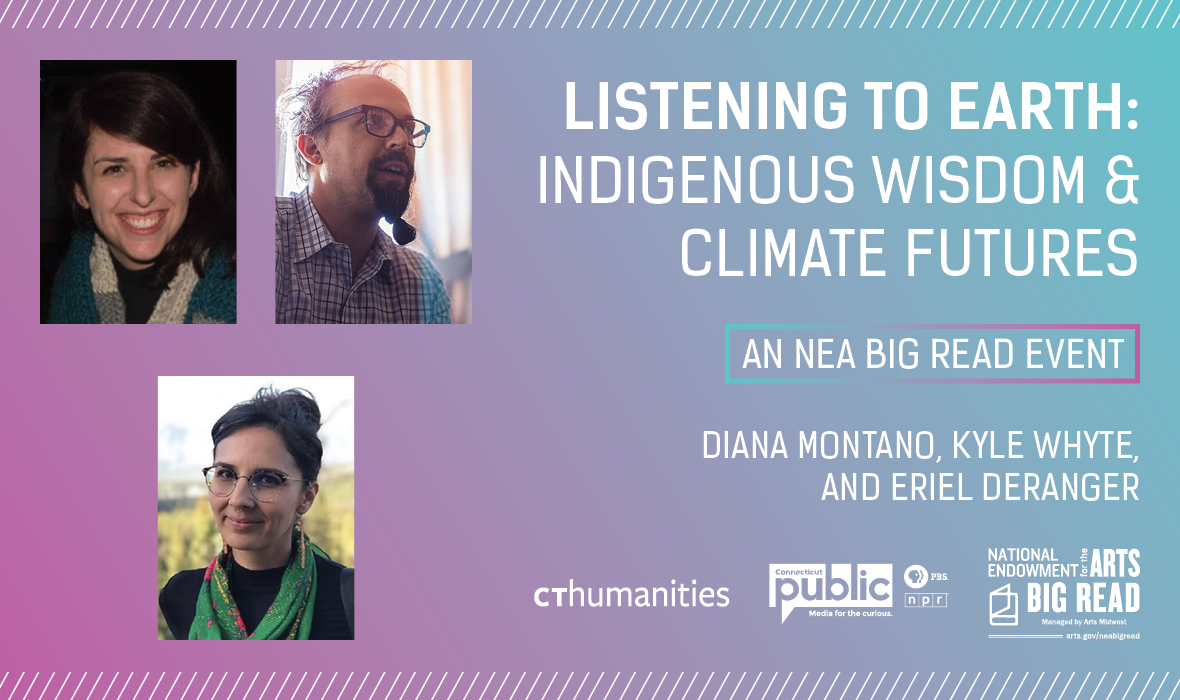 We rely on climatologists to deliver forecasts of a future planet, where the temperature slowly rises and everything from disease to population displacement to rising tides is inevitable. Solutions are proposed, but thus far we are woefully unable to meet benchmarks for scaling back the destruction. A different approach is possible: honoring indigenous wisdom that successfully stewarded the land for millennia before the arrival of western colonizers. This wisdom can be an even more powerful tool for diagnosing and curing what ails the living, organic organism of our earth. Hosted by Science Friday’s Diana Montano, hear from a panel of Native environmental justice activists Eriel Deranger and Kyle Whyte on the climate knowledge that has existed in indigenous communities for generations, and the practical solutions that can spur a better collective attempt at caring for our planet.

Presented in partnership with Science Friday and Connecticut Public.

Kyle Whyte is a Professor of Environment and Sustainability at the University of Michigan. His research addresses environmental justice, focusing on moral and political issues concerning climate policy and Indigenous peoples, the ethics of cooperative relationships between Indigenous peoples and science organizations, and problems of Indigenous justice in public and academic discussions of food sovereignty, environmental justice, and the anthropocene. He is an enrolled member of the Citizen Potawatomi Nation.

Kyle currently serves on the White House Environmental Justice Advisory Council, the Management Committee of the Michigan Environmental Justice Coalition, and the Board of Directors of the Pesticide Action Network North America. He has served as an author for the U.S. Global Change Research Program, including authorship on the 4th National Climate Assessment. He is a former member of the Advisory Committee on Climate Change and Natural Resource Science in the U.S. Department of Interior and of two environmental justice work groups convened by past state governors of Michigan.

Kyle is involved with a number organizations that advance Indigenous research and education methodologies, including the Climate and Traditional Knowledges Workgroup, the Sustainable Development Institute of the College of Menominee Nation, the Affiliated Tribes of Northwest Indians, and Ngā Pae o te Māramatanga New Zealand’s Māori Centre of Research Excellence. He is a certificate holder of the Training Programme to Enhance the Conflict Prevention and Peacemaking Capacities of Indigenous Peoples’ Representatives, from the United Nations Institute of Training and Research.

Eriel Tchekwie Deranger is a Dënesųłiné mother from the Athabasca Chipewyan First Nation (ACFN) and the Executive Director and co-founder of Indigenous Climate Action (ICA), an Indigenous-led climate justice organization in so-called Canada. Deranger is a member of the International Indigenous Peoples Forum on Climate Change, and sits on various boards including Bioneers, It Takes Roots Leadership Council, Climate Justice Resiliency Fund Council of Advisors, the UK Tar Sands Network and WWF Canada; and was a founding member of the Global Indigenous Youth Caucus. Deranger’s work focuses on Indigenous rights and building intersectional dialogue between Indigenous rights, climate justice and other social justice movements. She is recognized for her role as the spokespersons for her community (ACFN) in the international Indigenous Tar Sands Campaign and developing the Tar Sands Healing Walk. This included developing one of the first Indigenous rights-based divest movements; lobbying government officials in Canada, the US, the UK and the EU; supporting and leading mass mobilizations against the fossil fuel industry & climate change; and bringing international recognition to issues in her territory with celebrities and politicians alike. Deranger has written for the Guardian, Yellowhead Institute, The National Observer, Red Pepper Magazine; has been featured in documentary films including Elemental (2012); and is regularly interviewed for national and international media outlets including Democracy Now!, Aboriginal Peoples Television Network (APTN), and CBC.