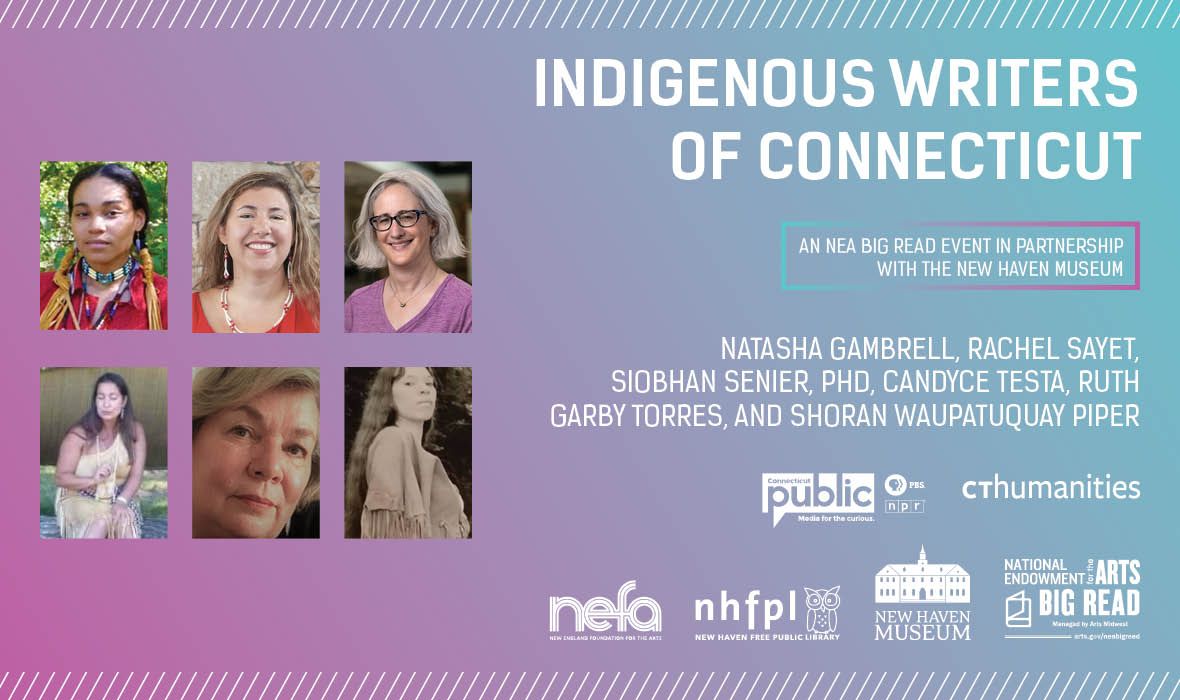 This panel representing various tribes among the five recognized in Connecticut will be curated by Dr. Siohban Senier of the University of New Hampshire who edits the online publication Dawnland Voices. The event is coordinated with input from Ruth Torres, West Haven resident and co-editor for the Schaghticoke section in the print version of Dawnland Voices, also edited by Dr. Senier. This anthology project, as described by the book's publisher in 2014, “calls attention to the little-known but extraordinarily rich literary traditions of New England’s Native Americans...from the earliest petroglyphs and petitions to contemporary stories and hip-hop poetry.” This panel discussion will inform our deeper understanding of contemporary indigenous culture and the living writers - our neighbors - who represent its diversity and strength.

Natasha Gambrell is the great-great-great-granddaughter of John Randall and Abby Fagins. She is the daughter of Valerie Gambrell, current Tribal Councilor for the Eastern Pequot Tribal Nation. She has been dancing Eastern Blanket, Jingle, and Northern Traditional since the age of eight. At 16, she was crowned Ms. Eastern Pequot. She has traveled to schools and colleges in the Northeast speaking on behalf of her tribe, and has participated with the Archaeology Field School Collaborative with UMass Boston, beginning in 2008. In 2015, she graduated from Eastern Connecticut State University with a B.A in English. In 2017, she was elected Tribal Councilor, where she is currently serving a second term with both her mother and brother. Her passion is representing her tribe and telling their story. To learn more about the Eastern Pequot, their government, and efforts to fight for federal recognition visit http://easternpequottribalnation.org/.

Rachel Beth Sayet or Akitusut (She Who Reads) is a member of the Mohegan nation. Raised with the spirits of her ancestors, she grew up learning traditional stories and teachings and participating in tribal events. Rachel has always been passionate about and proud of her Mohegan heritage and identity as well as an avid studier and learner about other cultures, indigenous and beyond. History has always been her favorite subject.

Rachel’s other main passion throughout her life has been food. As a child, she grew up cooking with her grandmother and mother. Rachel’s grandmother Phyllis is a Russian American Jew who always been ahead of the curve when it came to food. In the 1980s she taught Chinese cooking classes. Phyllis inspired Rachel to always try different foods and learn to cook cultural cuisines.

Rachel has a BS in Restaurant Management from Cornell University. In 2012 she earned a master's degree in Anthropology and museum studies from Harvard University.

Siobhan Senier is a Professor of English and Chair of the Department of Women’s and Gender Studies at the University of New Hampshire. Dr. Senier edited the anthology Dawnland Voices, published by the University of Nebraska, and its corresponding online journal, Dawnland Voices 2.0.  Her groundbreaking scholarship, teaching, and activism have inspired students and communities across several areas of research: American Studies, Native American Studies, and New England Studies. Her other publications include Voices of American Indian Assimilation and Resistance (U of Oklahoma P, 2001), Sovereignty and Sustainability: Indigenous Literary Stewardship in New England (U of Nebraska P, 2020) and essays in journals including American Literature, American Indian Quarterly, Studies in American Indian Literatures, MELUS, Disability Studies Quarterly, and Resilience.

Candyce Testa (Pequot) M.A., is a cultural anthropologist whose work focuses on native language, identity and connection to place in an attempt to reclaim the indigenous spaces of her ancestors. She currently works as a cultural instructor for the Mashantucket Pequot Tribal Nation (MPTN).  In this position she leads her community in language reclamation, assists with event organization, provides art workshops and tells indigenous stories. She considers herself a student of life and enjoys sharing her reverence for the land and waters with her people.

Ruth contributed her chapter, "How You See Us, Why You Donʹt: Connecticut’s Public Policy to Terminate the Schaghticoke Indians" in the volume, "Recognition, Sovereignty Struggles, and Indigenous Rights in the United States: A Sourcebook" edited by Amy E. Den Ouden and Jean M. O'Brien.  With Schaghticoke elder and educator Trudie Lamb Richmond, Ruth was the co-editor for the Schaghticoke section in "Dawnland Voices."  She holds a Master of Public Administration from Harvard University.  A resident of West Haven, Ruth reads - not writes - for pleasure.

Clan Mother Shoran Waupatuquay Piper is the tribal leader of the Golden Hill Paugussett Nation and author of a book coming out this summer titled The Red Road. A gifted spiritual advisor, she is the daughter of Chief Big Eagle Piper who was a legendary figure and very well known all over the world. Clan Mother was raised at her father's knee and chosen while still in elementary school to follow in his footsteps as he followed her grandmother, Chieftess Rising Star. Today, her life's work is to keep these sacred traditions - including song, dance, stories, and spirituality teachings - alive for all the seven generations to come. Protecting these sacred ways, she will be the voice for ancestors and the protector of their legacies, visions, hopes, and dreams.