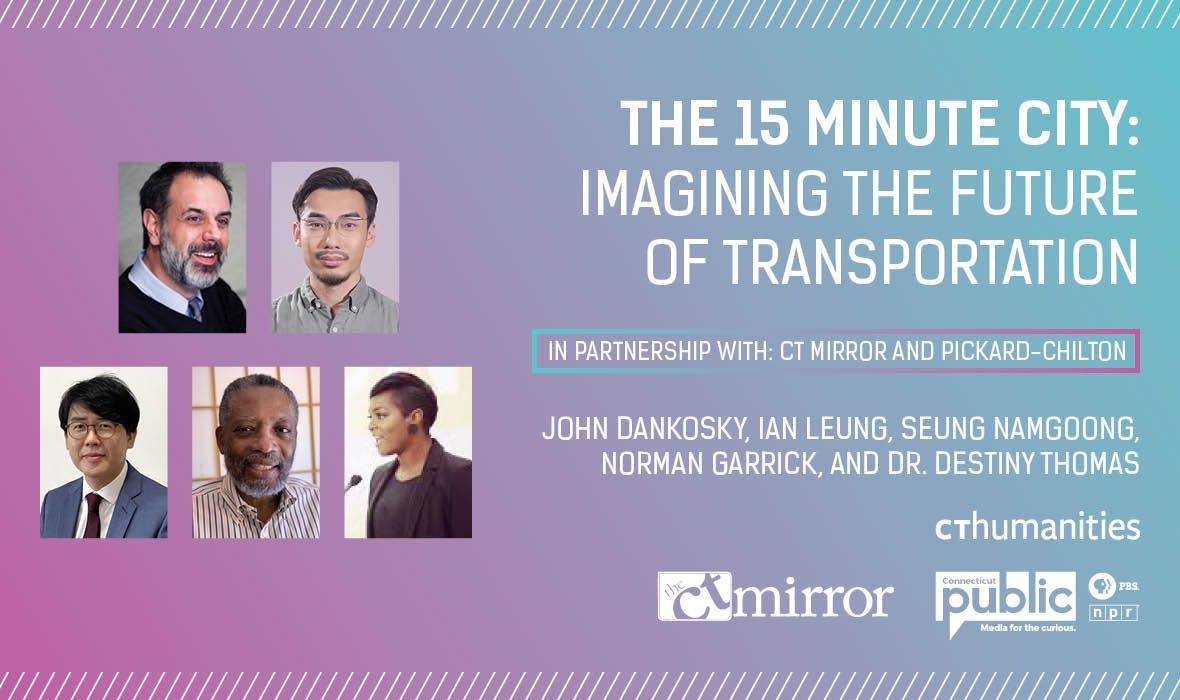 The 15 Minute City: Imagining the Future of Transportation

In partnership with: The CT Mirror & Pickard Chilton

How would it change your life if you had everything you needed within a 15-minute walk? Throughout the world, architects, city planners and community organizers are constructing aesthetically pleasing, human-centered cities that rely less on cars and other nonrenewable resources while providing more opportunities for people to live well. From bikes to helipads and high-speed trains, experts from around the world and close to home are developing the latest strides in transportation and eco-design. Join radio journalist and moderator John Dankosky for this series of short presentations from around the world followed by a panel discussion, in partnership with architecture firm Pickard Chilton and the CT Mirror.

Ian Leung is a professional arts administrator, educator and curator in performing arts and public art. Starting out from theatre creations, which open up the whole contemporary art world, he founded his own theatre troupe - Thealosophers as Executive Director along with two other partners, that set out to contemplate contemporary issues in the context of theatre and philosophy .

Ian genuinely appreciates the power of art in transcending people and enhance our quality of life. He welcomes the role as leader in channeling collective wisdom with experts and talents across difference fields i.e Business, Architecture, Psychology and Science . Ian believes in the inter-disciplinary approach in tackling challenges and creative solution. Besides farming art, Ian usually spends his time in surfing, sailing, jogging, reading, board-gaming and Judo.

Seung Namgoong has extensive experience on transformative urban master plans, large scale corporate headquarters, and commercial and mixed-use high-rise projects for a diverse and international client base. His education and working experiences in the United States, South Korea, and Japan not only have influenced his approach to architectural design, but also fine-tuned his understanding of appropriate buildings and urban developments with respect to different cultures. Mr. Namgoong is fluent in English, Korean, and Japanese. Mr. Namgoong is currently a key designer and the project manager for the 13-hectare / 32-acre Global Gateway Shinagawa urban development and Y2, a 297,000 m2 / 3.3 million gsf mixed-use high rise, both currently under construction in Tokyo, Japan. Most recently, he was a key member of the design team for Canal Place, the new headquarters for Dominion Energy in Richmond, Virginia. Previous project experience includes, The Atrium in Dubai, UAE; Eaton House in Dublin, Ireland; Eaton Center in Cleveland, Ohio; 24 Allen Plaza and 50 Allen Plaza, two high-rise office towers in Atlanta, Georgia; the competition for the CMA Headquarters in Riyadh, Saudi Arabia; and the 1000+ meter Kingdom Tower in Jeddah, Saudi Arabia. Mr. Namgoong received a Bachelor of Art in Architecture and Minor in Art from University of California at Berkeley and a Master of Architecture from the Yale School of Architecture. Active in numerous community organizations, he has been a volunteer and researcher for the International Festival of Arts and Ideas based in New Haven, Connecticut and the New Haven Chapter of the ACE Mentor Program for high school students.

Norman Garrick is a Professor of Civil Engineering at the University of Connecticut. Dr. Garrick is also a former member of the national board of The Congress for the New Urbanism (CNU) and an elected Fellow of CNU. He specializes in the planning and design of urban transportation systems, including transit, streets, street networks, parking, bicycle and pedestrian facilities. His research and writings have reached a wide audience through outlets such as The Washington Post, The Denver Post and The Hartford Courant, The Atlantic (now Blomberg) CityLab, Planetizen, New Urban News, Streetsblog, Streetfilm and Public Radio both in the USA and abroad. In addition to his academic career, Dr. Garrick has worked as transportation consultant on numerous design charrettes including urban revitalization projects with the Prince of Wales Foundation in Kingston, Jamaica and in Freetown, Sierra Leone, and hurricane recovery in Louisiana and Mississippi. Dr. Garrick is a Fulbright Fellow as well as the recipient of the Transportation Research Board’s Wootan Award for Best Research Paper in policy and organization, and numerous awards for teaching at UConn.

Dr. Destiny Thomas is a change agent and an anthropologist planner. She is the founder and CEO of Thrivance Group and was recently featured on Good Morning America for her leadership in the urban planning sector. At Thrivance Group, Dr. Thomas works to bring transformative justice into public policy, urban planning and community development. With over 15 years of experience shaping key policy initiatives, Dr. Thomas believes race, place, and joy define individual and community outcomes.