Home Events 2021 Ideas Everything You Touch, You Change: Visionary Science Fiction and Liberation 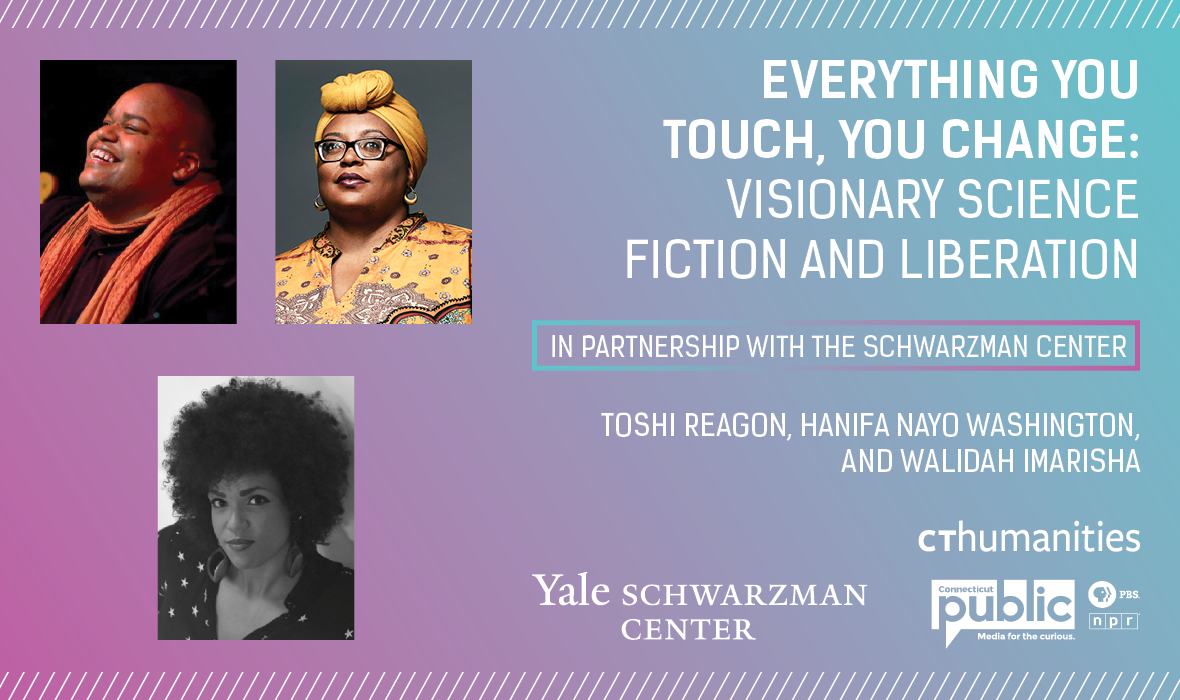 Everything You Touch, You Change: Visionary Science Fiction and Liberation

In partnership with The Schwarzman Center

Social Justice meets sci-fi meets songwriting in this panel discussion between musician, composer, and curator Toshi Reagon; cultural producer & sacred artivist Hanifa Nayo Washington; and writer, activist, educator, and spoken word artist Walidah Imarisha. In partnership with the Yale Schwarzman Center, these award-winning luminaries will touch on themes of Afrofuturism, Octavia Butler, and bringing a creative approach to our understanding of what social justice initiatives of the future might look like.

This event is presented in partnership with the Yale Schwarzman Center.

Walidah Imarisha is an educator and a writer. She is the co-editor of two anthologies including Octavia's Brood: Science Fiction Stories From Social Justice Movements. Imarisha is also the author of Angels with Dirty Faces: Three Stories of Crime, Prison and Redemption, which won a 2017 Oregon Book Award. In 2015, she received a Tiptree Fellowship for her science fiction writing. Imarisha currently teaches in Portland State University’s Black Studies Department and is director of the Center for Black Studies. In the past, she has taught at Stanford University, Oregon State University, and Pacific Northwest College of the Arts.

Toshi Reagon has been described as “a talented, versatile singer, songwriter and musician with a profound ear for sonic Americana—from folk to funk, from blues to rock” by critic/blogger Eva Yaa Asantewaa (InfiniteBody). “She masters each of these genres with vocal strategies that easily spiral and swoop from the expressively sinuous to the hard-charging, a combination of warmth and mischief.” While her expansive career has landed her comfortably in residence at Carnegie Hall, the Paris Opera House and Madison Square Garden, you can just as easily find Toshi turning out a music festival, intimate venue or local club. Toshi finds home on any musical stage. Toshi has had the pleasure of working with Lenny Kravitz, Lizz Wright, Ani DiFranco, Carl Hancock Rux, Nona Hendryx, Pete Seeger, Chocolate Genius and many other amazing artists, including her favorite collaborator, her mom, Bernice Johnson Reagon. Yaa Asantewaa writes, “Toshi knows the power of song to focus, unite and mobilize people. If you’ve been lucky enough to be in Toshi’s presence, you know you can’t walk away from her without feeling better about yourself as a human being. She aims for nothing less.” Toshi has been the recipient of a NYFA award for Music Composition, The Black Lily Music and Film Festival Award for Outstanding Performance. She is a National Women’s History Month Honoree, and is the 2010 recipient of OutMusic’s Heritage Award.

Hanifa Nayo Washington is an award winning cultural producer & sacred artivist. Hanifa has been combining arts, healing, and activism to make the world a better place for 20+ years. Hanifa is a certified Usui/Holy Fire Reiki Master Practitioner who graduated from Beloit College in 2001 with a B.A. in Communications & Russian & Soviet Studies. Hanifa is the Principal Organizer & Co-Founding Practitioner of One Village Healing, a wellness and resilience initiative dedicated to creating spaces, gatherings, and programming, rooted in the values of the healing justice movement so all people can heal from the emotional, physical and spiritual impacts of systems of oppression. She also currently works with Co-Creating Effective and Inclusive Organizations as the Director of Community Engagement and is a leader of the New Haven Community Leadership Program. In November of 2020 Hanifa joined the founding team of Fireside Project as the Cultivator Of Beloved Community. Fireside Project developed and launched the first national Psychedelic Peer Support Line in April 2021. As a sacred activist Hanifa views her creative gifts as radical tools for liberation, healing, and community building. In 2017 she released her 3rd album Mantras for the Revolution. In December 2018 Hanifa received a Phenomenal Women Arts Award from the Arts Council of Greater New Haven for her contributions and achievements in the arts.