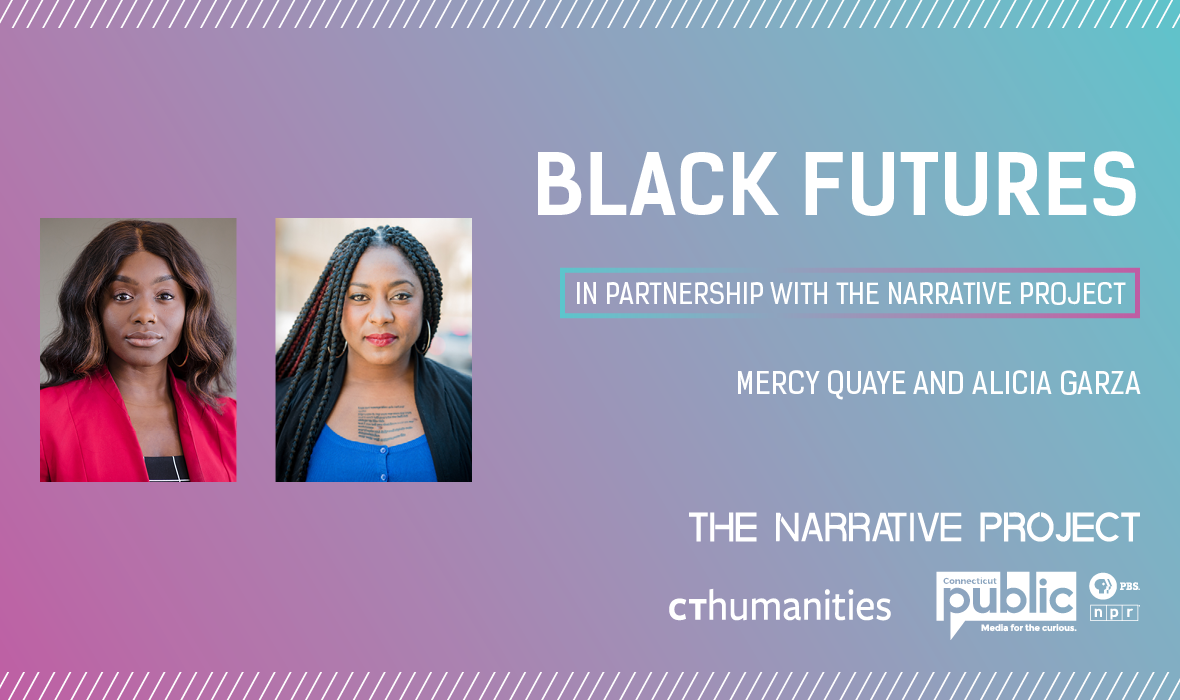 In partnership with The Narrative Project

VIRTUAL EVENT
This event will be streamed live on Facebook Live, YouTube, Twitch, and our Virtual Stage.

Co-founder of the Black Lives Matter (#BLM) movement, organizer, and civil rights activist Alicia Garza will sit down with Mercy Quaye, Founder and President of The Narrative Project, in a one-on-one conversation about the future of black lives in America. In partnership with The Narrative Project, a New Haven-based communications consulting group aimed at elevating the profiles of non-profits and mission-driven organizations, Garza and Quaye will discuss Black Futures Lab, an initiative to transform Black communities into active, interdependent, responsive public partners that change the way power operates—at the local, state, and national level.

Community organizer and co-creator of #BlackLivesMatter

Alicia is the co-creator of #BlackLivesMatter and the Black Lives Matter Global Network, an international organizing project to end state violence and oppression against Black people. The  Black Lives Matter Global Network now has 40 chapters in four countries. She also serves as the Strategy & Partnerships Director for the National Domestic Workers Alliance, which the nation’s  premier voice for millions of domestic workers in the United States. Additionally, Alicia is the  co-founder of Supermajority, a new home for women’s activism.

Alicia has become a powerful voice in the media and frequently contributes thoughtful opinion  pieces and expert commentary on politics, race, gender, sexual orientation and gender identity.  Her work is featured in ​TIME​, MSNBC, ​The Washington Post​, ​The New York Times​,​ The Guardian​, ​Elle  and ​Essence.

In addition, Alicia has received numerous accolades and recognitions, including being on the cover  of TIME’s 100 Most Influential People in the World issue (September 2020), named to TIME’s 100  Women of the Year list (March 2020), Fortune's 40 Under 40, Fast Company’s Queer 50 list,  Politico 50 and 3x recipient of The Root’s list of 100 African American achievers and influencers.  Alicia has received the Sydney Peace Prize, Adweek Beacon Award, Glamour’s Women of the Year  Award, Marie Claire’s New Guard Award, and was honored as the Community Change Agent at  BET’s Black Girls Rock Awards.

Alicia’s first book, ​The Purpose of Power: How We Come Together When We Fall Apart​, releases  October 20, 2020 with One World (Penguin Random House.) She shares her thoughts on politics  and pop culture on her podcast, Lady Don't Take No.

Mercy (she/her) is the Founder & President of The Narrative Project, Connecticut's only anti-racist public relations agency. She's and has built a storied career in journalism, communications, and public relations in New Haven and statewide for more than a decade. After working in the public and non-profit sectors, spearheading communications strategies in a variety of industries, she launched The Narrative Project to offer high-quality communications for organizations who seek to do good in the world. After leaving a formal career in Journalism, Mercy began working in mission-driven communications for public and non-profit organizations focusing on equitable education, undocumented students' rights and more. She’s also spent time working in public relations as the Managing Director of External Affairs with Educators for Excellence, the Director of Communications with New Haven Public Schools, and as a Communications Associate with the Connecticut Coalition for Achievement Now. At the core of everything she does is a deeply seeded desire to effect positive social change through collaboration and highlighting lesser-discussed aspects of the Black and American experiences. The daughter of a Ghanaian immigrant on one side and a first-generation college student on the other, Mercy's relationship to justice through storytelling and exposure was born shortly after moving from low-income housing in Newhallville to the West River neighborhood -- a Westville adjacent community with the promise of opportunity, but far fewer resources than it required. A self-proclaimed "inner-city kid who went to college," Mercy's perspective on life has been shaped through a number of experiences including: converting from Christianity to Islam to agnosticism; joining a historically Black sorority at a predominately white university; section hiking the Appalachian Trail and having a brief stint in the outdoor industry; having an oddly in-depth interest in astrophysics; being in an interracial marriage with a former Wyomingite from a conservative family, and a convergence of countless other random happenings. She’s a professor of digital journalism at Southern Connecticut State University, the Vice President for Communications with the Connecticut Society of Professional Journalists, and a columnist with Hearst Connecticut Media. Her column Subtext offers readers a lesser-examined perspective on well-known topics and delves into the potential ripple effects of any given issue. She obtained a Bachelors in Journalism and a Masters in Public Relations from Quinnipiac University. ​ ​