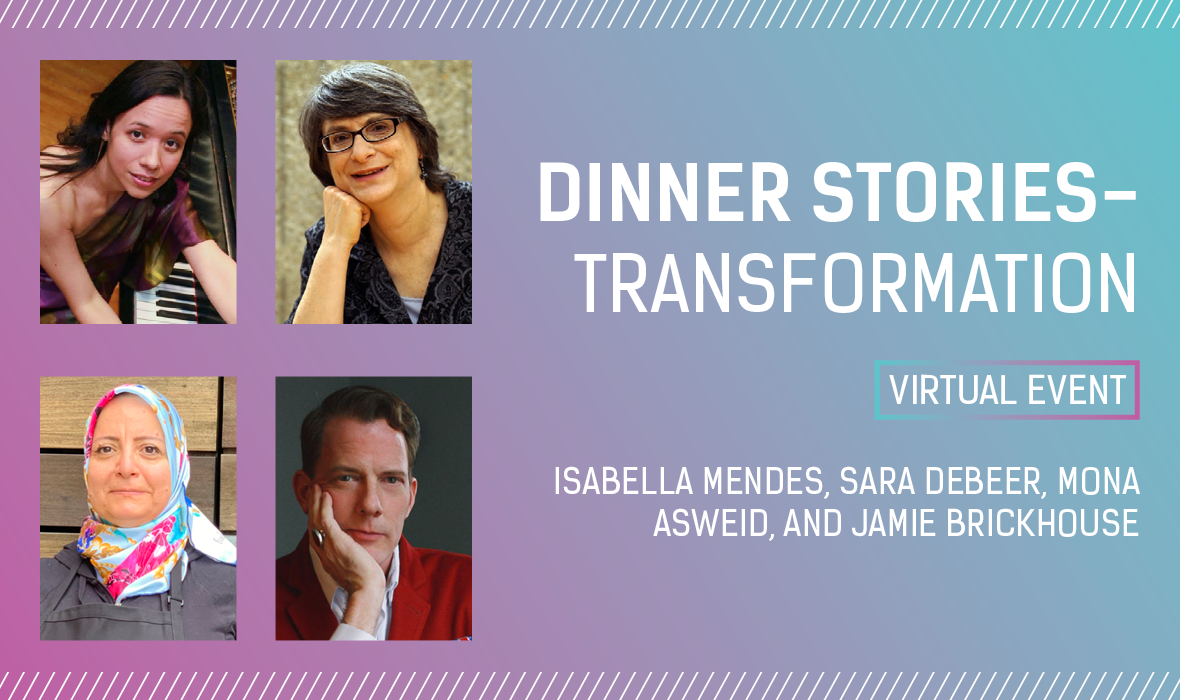 WATCH VIDEO
Convert your home into a virtual dinner theater with this evening of music, storytelling and food. Set to the “expressive, pristine vocals” (WNPR) of jazz artist Isabella Mendes, three different story tellers will focus on the theme of transformation, among them Mona Asweid, a Syrian refugee from Damascus who transformed her life after she lost and regained her hearing as a result of the war.

For a transformative discussion-dinner pairing, we suggest Sanctuary Kitchen, a program of CitySeed, where food celebrating the culinary customs, cultures, and stories of refugees and immigrants resettled in Connecticut provides nourishment. Sanctuary Kitchen will be preparing a special menu for this event. It will be posted on 5/6 and orders will need to be placed by 5/10.

Singer, songwriter, composer, pianist, and educator Isabella Mendes is quickly becoming one of New Haven and Hartford County’s top Brazilian and Jazz entertainers in the industry and has earned an impressive list of accomplishments well beyond her years. Born in Sao Paulo, Brazil, Isabella started to study music at age four and hasn't stopped since. She has been studying with Grammy Winner pianist Fabio Torres and Emmy Winner vocalist Michal Towber. Isabella is also a leader in education, studying at Carnegie Hall as part of the Music Educators program. She is the founder and teacher of IMMusic Studio, a private music school, where she teaches piano and voice. She is an advocate for women and diversity in the arts, and is leading workshops bringing diversity through music in schools and community events.

Since 1978, Sara deBeer has been presenting programs of multicultural myths, legends, and folktales to audiences of all ages. Audiences discover the richness of each individual culture while also appreciating the universality of human experiences. Sara has a BA in English from Yale and a MA of Science in Education from the Bank Street School of Education. Under the sponsorship of the Robert C. Bates Fellowship, a Yale summer grant, Sara deBeer spent the summer of 1980 studying storytelling traditions in Ireland. She traveled along the west coast of Ireland recording oral narratives, and asking about people’s memories of hearing stories told. In 2004, Sara was awarded the Barbara Reed Award for Distinguished and Outstanding Service to the Connecticut Storytelling Community.

Mona is originally from Damascus, Syria and arrived in the United States in 2017 with her Mother and Daughter. She learned how to cook from her parents. Her father was a great chef, but she especially loved her mother’s cooking. One of her favorite meals to make at Sanctuary Kitchen is Yalenji (stuffed grape leaves), which is very popular with our customers. Mona loves working with and learning about the experiences and cultures of the other chefs of Sanctuary Kitchen. She is proud to say that she has grown as a person while working at Sanctuary Kitchen, and is thankful for the opportunity to gain a different perspective on the world. Mona has taken courses in adult education and is certified as a Servsafe Food Manager. She has dreams of opening an institute to teach cooking that is also kid-friendly. She pictures an environment where adults can learn and children can play and have fun. She wants to thank the Sanctuary Kitchen team and our customers for this opportunity to live out her dreams and make a life for herself in the United States.

Called “a natural raconteur” by the Washington Post, Jamie Brickhouse is the New York Times published author of Dangerous When Wet: A Memoir of Booze, Sex, and My Mother, and he’s appeared on PBS-TV’s Stories from the Stage, The Moth Podcast, Risk! Podcast, Story Collider Podcast, and recorded voice-overs for the legendary cartoon Beavis and Butthead. He is a four-time Moth StorySLAM champion, National Storytelling Network Grand Slam winner, and Literary Death Match champ. Brickhouse tours two award-winning solo shows, Dangerous When Wet, based on his critically-acclaimed memoir, and I Favor My Daddy, based on his forthcoming memoir. He is a regular on the New York storytelling circuit and has performed across the country, including Mexico and Canada. Brickhouse has been published in the New York Times, International Herald Tribune, Washington Post, Daily Beast, Salon, Out, Huffington Post, and is a guest blogger for POZ. He lives in New York City with his husband Michael.