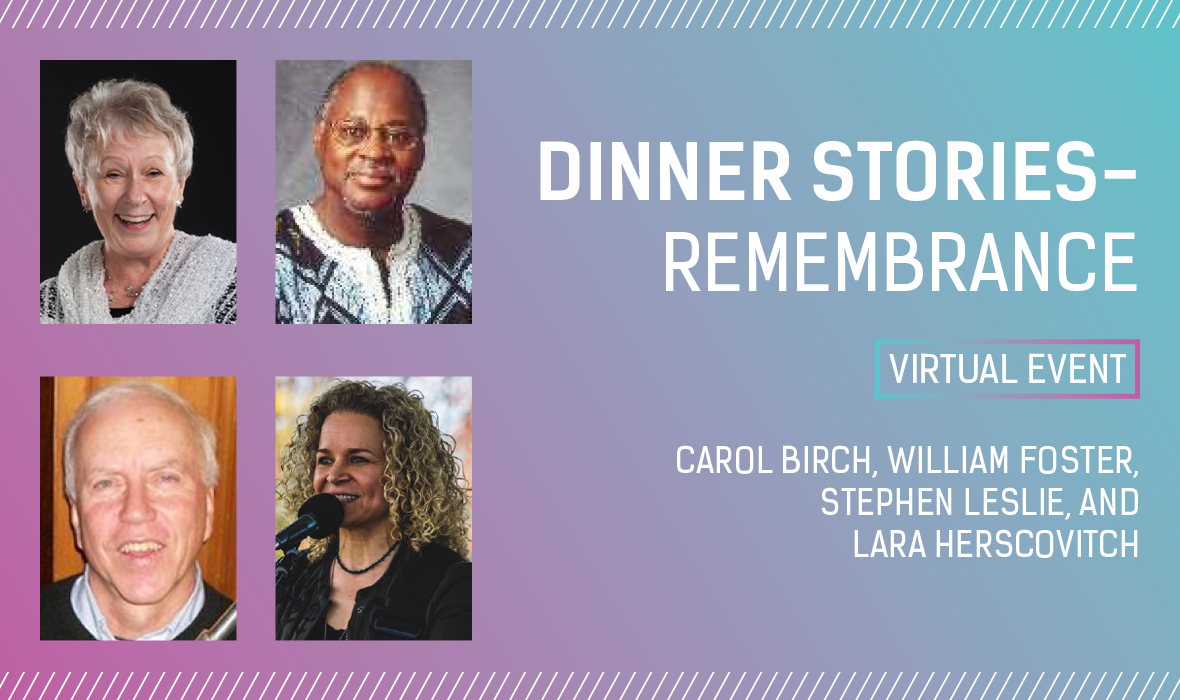 Join us for an evening of sounds, storytelling and sustenance, as we dive into traditions of remembrance. The “luminous voice and buoyant stage presence” (The Boston Globe) of Lara Herscovitch will punctuate three explorations of memory from celebrated storytellers and performers Carol Birch, William Foster and Stephen W. Leslie.

Our perfect dinner pairing for this is Soul de Cuba Café. Check out their menu below.

In 1998 Carol Birch received the National Storytelling Network's Circle of Excellence Award given to storytellers recognized as master tellers by their peers, setting standards for excellence, and demonstrating a commitment and dedication to the art over a significant period of time. Thirty years of experience have earned her a respected place in the forefront of the revival of platform storytelling: teaching at Southern Connecticut State University; lecturing at forty-one universities across the nation, as well as professional and corporate organizations; producing nine audio-anthologies for the National Storytelling Association; directing seventeen audio-cassettes for independent storytellers as well as August House, Lightyear Entertainment, and Weston Woods Studios; writing THE WHOLE STORY HANDBOOK: USING IMAGERY TO COMPLETE THE STORY EXPERIENCE; co-editing WHO SAYS? ESSAYS ON PIVOTAL ISSUES IN CONTEMPORARY STORYTELLING, the first book on the aesthetics of storytelling; serving as a chairperson of the Anne Izard Storyteller's Choice Award; and producing three award-winning audio-cassettes of her own stories.

Known for a compelling blend of energy, warmth, vulnerability, and directness, Carol restores orality and spontaneity to the fixed silence of stories found in print, but as a third-grader in North Carolina pointed out: "She knows that story 'cause she was there!"

Prof. William Foster has performed as a storyteller for a number of years in venues including school assemblies, classrooms, and FIRST NIGHT celebrations in Hartford and New Haven. He is a playwright, poet, and filmmaker, and the author of 15 books and 10 plays.

Storyteller
Stephen W. Leslie is a retired mental health counselor and hospice and hospital chaplain. He is a frequent speaker at The Moth and is a published author and prize winning poet. His poetry has been published in Great Britain, Australia, Japan and the United States. He has a M.S. in Pastoral Counseling from Loyola College and a M.S. In Economic Education from Johns Hopkins University. His stories are gleaned from the lives of patients, clients and co-workers in the challenges of providing health care.

Lara Herscovitch is singer-songwriter-poet-performer gem. As described in The Boston Globe, she brings “a luminous voice and a buoyant stage presence… big-hearted lyrics embrace the sum of life… Herscovitch’s music blows on the embers of a lagging spirit or a dormant creative life.”

Lara leads with authenticity, integrity, humor and heart. Sound Waves Magazine described her music as “expertly written prose… songwriting at its best… good for your ears AND your soul.”

Acoustic Live in New York City added, “She possesses not only a huge reservoir of musical talent and a voice with a bell-like clarity, but a keen sense of global concern and a fierce intellect... It might seem too good to be true, but true it is.”