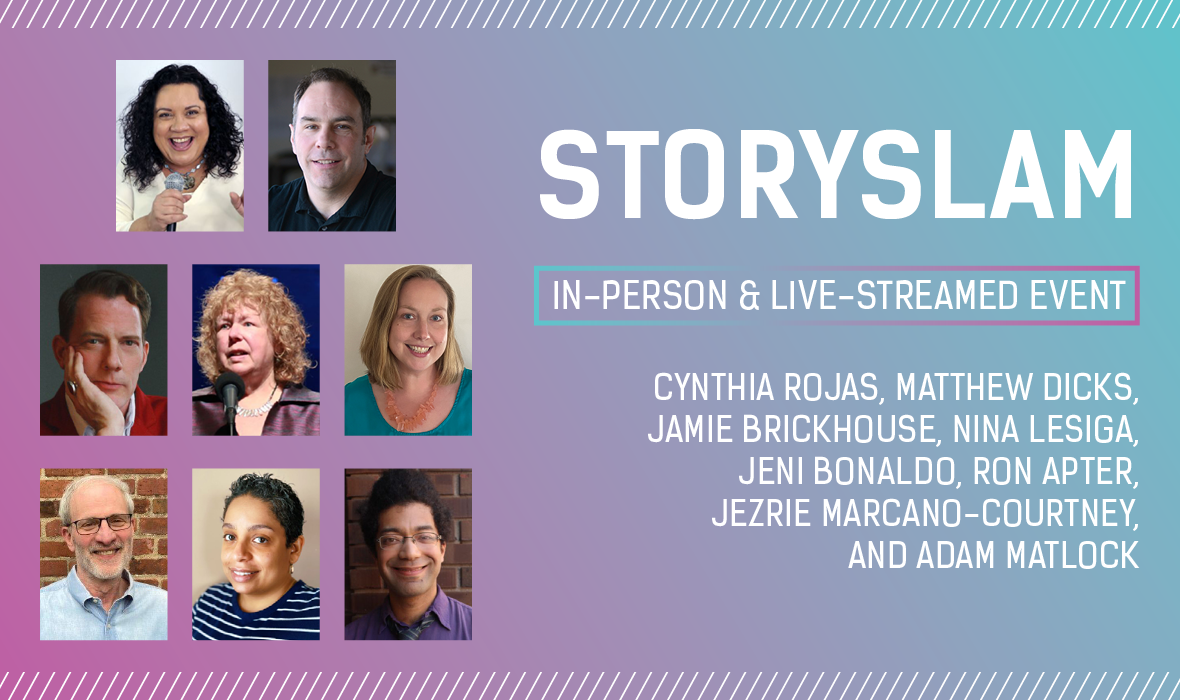 Our festival is usually a space of community-building and collaboration, not competition. But sometimes a winner just has to be crowned. Join us for a festival storytelling slam, where a group of curated professional performers will battle head-to-head for the title of top festival slammer. Each performer will be given a five-minute slot on the mainstage, with musical interludes. Audience members will select their favorite among some of the most decorated storytellers in the New England slam scene -- and beyond.

"Cynthia’s love of storytelling shines through in all she does. A life enthusiast, Cynthia tells personal stories that take an audience on a journey filled with laughter, wonder, and reflection. Her ability to transform everyday moments into captivating narrative makes her stories resonate with many. Cynthia’s embrace of personal storytelling is rooted in the idea that we all experience extraordinary moments worthy of sharing with others. In each story -- whether on stage or in a workshop -- she explores a wide range of topics and perspectives. She has performed throughout Connecticut at The Mouth-off, New Haven Storytellers, Story City Troupe, Tellabration, and in Boston at The Story Space and MassMouth. She has also been featured on Stories from the Stage, the only nationally syndicated storytelling televised show in the U.S. Cynthia is the second-place winner of the Hartford Story Slam (November 2019) and the audience choice winner at the MassMouth Story Slam (January 2020).

Matthew Dicks is an elementary school teacher, columnist, and internationally bestselling author of several novels including The Other Mother Memoirs of an Imaginary Friend, and Twenty-one Truths About Love, as well as the nonfiction title Storyworthy: Engage, Teach, Persuade, and Change Your Life Through the Power of Storytelling. Matthew is a record 51-time Moth StorySLAM and 6-time GrandSLAM champion whose stories have been featured on This American Life. He’s the founder of Speak Up, a Hartford-based storytelling organization. He teaches public speaking and storytelling around the world to corporations, universities, politicians, advertising agencies, the clergy, and more.

Called “a natural raconteur” by the Washington Post, Jamie Brickhouse is the New York Times published author of Dangerous When Wet: A Memoir of Booze, Sex, and My Mother, and he’s appeared on PBS-TV’s Stories from the Stage, The Moth Podcast, Risk! Podcast, Story Collider Podcast, and recorded voice-overs for the legendary cartoon Beavis and Butthead. He is a four-time Moth StorySLAM champion, National Storytelling Network Grand Slam winner, and Literary Death Match champ. Brickhouse tours two award-winning solo shows, Dangerous When Wet, based on his critically-acclaimed memoir, and I Favor My Daddy, based on his forthcoming memoir. He is a regular on the New York storytelling circuit and has performed across the country, including Mexico and Canada. Brickhouse has been published in the New York Times, International Herald Tribune, Washington Post, Daily Beast, Salon, Out, Huffington Post, and is a guest blogger for POZ. He lives in New York City with his husband Michael. Find him @jamiebrickhouse on Facebook, Instagram, YouTube, Twitter, and visit www.jamiebrickhouse.com.

Nina Lesiga's favorite place to be is outside her comfort zone. She tells stories of uncommon adventure from her youth in Brooklyn, NY to her current life in Stratford, CT.

Nina's performed on PBS's "Stories From the Stage", "Generation Women" and "The Story Space." She hosts the Bridgeport Art Trail Storytelling Exchange and is one of the organizers of PechaKucha Night Bridgeport visual storytelling.

Jeni Bonaldo lives in Connecticut with her family. She is a teacher, writer, and storyteller. She has told stories at The Moth in New York City and Boston and tells stories in Connecticut for Speak Up, Tell Me Another Story, The Mouth-Off, and Songs and Stories.

In addition to teaching high school English and Creative Writing, she works as a storytelling workshop assistant for Matthew Dicks and as a Narrative 4 Master Practitioner. She is currently working on her first novel and hopes to finish it before books go extinct.

Ron Apter has been telling stories to juries and judges his entire legal career, first as a federal criminal prosecutor and more recently as an insurance defense attorney.  In his spare time, Ron is an avid Hosta gardener, speed walker, fantasy baseball enthusiast, novice Talmudist, and mock trial coach. Ron's team of aspiring 7th-8th grade barristers was recently named 2021 Connecticut Middle School Mock Trial State Champions.  A longtime but long-ago New Haven resident, Ron has many fond memories of raising a glass at Richter's, The Anchor, and Boppers, and way back when Westville turned down the chance to host Paul McCartney at the Yale Bowl, of organizing an alternative concert on the Green--Sunday in the Park Without Paul--featuring a Beatles tribute band. Ron now lives in Hartford with his wife Carrie and son Marcus. Ron's twenty-something daughters, Emily and Charlotte, have gone off to college and the great beyond although they still come home for an occasional dinner and to do their laundry.

Adam Matlock works as an accordionist, composer, vocalist, and educator living and working in New Haven, CT. Matlock writes songs under the name An Historic, building narratives accompanied by musical inspirations from Balkan music and Klezmer, Soul, and various strains of rock. An Historic exists as a solo project, but is reinforced live and on record with the members of Dr. Caterwauls Cadre of Clairvoyant Claptraps, a folky/jazzy band adding trombone, fiddle, banjo and accordion to the standard rock instrumentation of guitar, bass, and drums.

He also composes under his own name, most notably the opera Red Giant(2014) for 6 piece ensemble and three singers, and Earthseed Songs (2012) for voice and two instrumentalists.

Matlock also began to expand his role as a performer in 2009, playing original music and interpretations with projects including An Historic, Broadcloth, Gzara, and Dr. Caterwaul's Cadre of Clairvoyant Claptraps. He has recorded, performed, or improvised with artists including Anthony Braxton, Mario Pavone, Ceschi, Vinny Golia, Sigh, and Clara Engel, and works as a group and private teacher in the New Haven area.