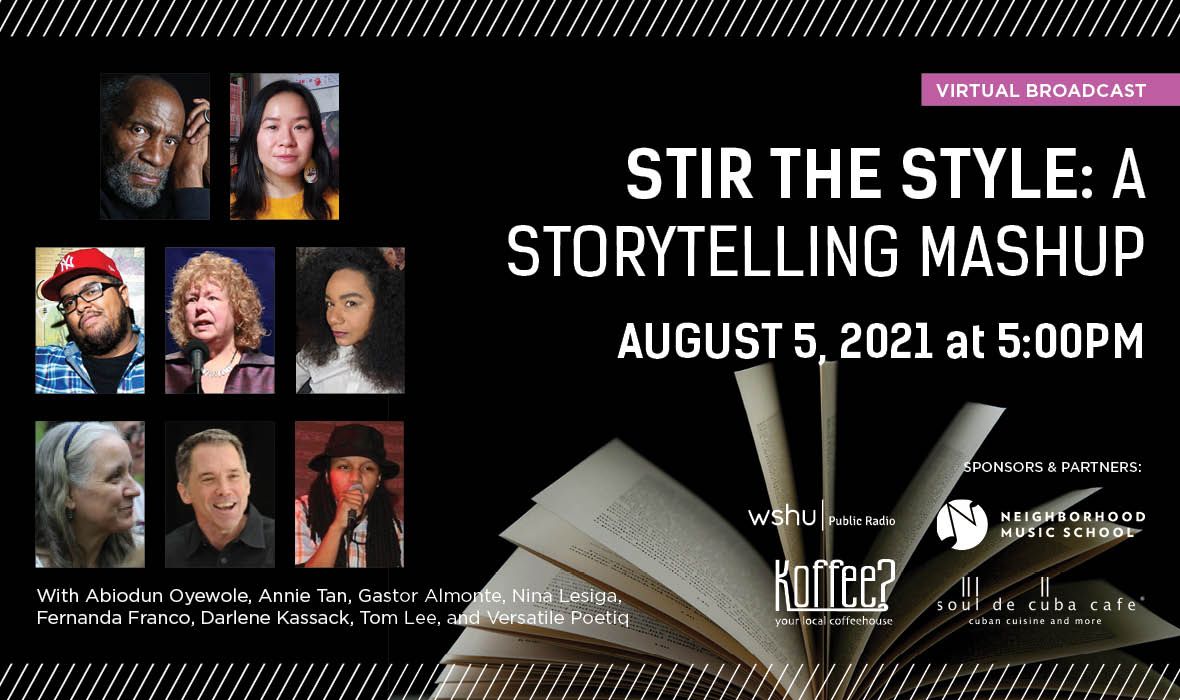 Stir the Style: A Storytelling Mashup

Broadcasting 8/5 at 5PM on our Virtual Stage!

We’re breaking the “rules” of narrative events with Stir the Style, exhibiting every method of storytelling imaginable -- from spoken word to poetry to folktelling to personal narratives to rap and everything in between. Award-winning writers, comedians and performers will take the stage for 10-minute performances, each bookended by the musical stylings of musical guest Fernanda Franco.

ABIODUN OYEWOLE is a poet, author, teacher, and a founding member of the American music and spoken-word group The Last Poets, which laid the groundwork for the emergence of hip-hop.

During the course of his fifty year career and his long affiliation with The Last Poets, Oyewole is one of several poets credited for liberating American poetry by creating open, vocal, spontaneous, energetic and uncensored vernacular verse that paved the way for spoken word and hip-hop. He has dedicated his craft to retro-acting the perils of poverty, racism, and uplifting his people. Over the years, Oyewole has collaborated on more than a dozen albums and several books. The Last Poets (with Umar Bissan) would record Holy Terror (1993), The Time Has Come (1997), Understand What Black Is (2018), and Transcending Toxic Times (2019).

With all the work Oyewole has done, perhaps his greatest legacy is “Sundays @ 110,” where every Sunday for the past thirty years he has opened his home to feed his fellow artists with food for thought, body and soul. During these sessions, he critiques, shares life experiences and a love of poetry with poets, writers and musicians from around the world.

Annie Tan is a special education teacher, activist, writer and storyteller based in New York City. Annie fights for her students, public education, teachers unions, tenants rights, and Asian American issues, working to organizing a better world. Her work has been featured in the New York Times, Huffington Post, The New Republic, PBS' documentary series Asian Americans, and twice on the Moth Radio Hour. Annie is currently working on her first book, a memoir, and hopes to write an epic book one day about her family and Asian American history. You can follow Annie's work at annietan.com and @annietangent!

Gastor is an award-winning stand up comedian, storyteller, writer, and host. He's appeared on COMEDY CENTRAL's This Is Not Happening, VICE and PBS. TIMEOUT magazine named him one of your "New Comedy Obsessions." He's a 2020 Webby award winner for his appearance on WORLD CHANNEL's Stories from the Stage. His debut album, Immigrant Made, debuted at #1 on iTUNES, Amazon and Google Play's comedy charts. His independently produced special, Immigrant Made, can be streamed on AMAZON PRIME.

Nina Lesiga's favorite place to be is outside her comfort zone. She tells stories of uncommon adventure from her youth in Brooklyn, NY to her current life in Stratford, CT. Nina's performed on PBS's "Stories From the Stage", "Generation Women" and "The Story Space." She hosts the Bridgeport Art Trail Storytelling Exchange and is one of the organizers of PechaKucha Night Bridgeport visual storytelling.

Fernanda Franco is a singer, educator and friend. She lives in New Haven, CT and is the lead singer of Fernanda and The Ephemera;, a.k.a. FaTE band. The band has recently released a single entitled "Only Me" as a Bandcamp Exclusive. This song encompasses finding oneself and losing the fear of self-love.

Darlene Kascak (Schaghticoke Tribal Nation) is the Education Coordinator at The Institute for American Indian Studies in Washington, Connecticut. Her experience as an educator, tour guide, museum assistant and Traditional Native American Storyteller has taught her the importance of educating both young and old about the many misconceptions and stereotypes about her ancestors. Her style of teaching from a Native American’s point of view allows children and adults the opportunity to have a new understanding of Connecticut’s Indigenous Peoples lives both in the past and in the present.

Tom Lee is a professional storyteller with thirty years experience performing traditional stories, folktales and myths for adults and for children. Tom’s repertoire is a rich trove of myths and stories from cultures around the world; some are centuries old, some originated thousands of years ago. Tom began researching traditional stories while living in Scotland. His first performances were late night retellings of Grimm’s fairy tales in a tiny theater at the back of a London pub called, appropriately, “The Man in the Moon.” This program was presented at the Edinburgh Festival and, subsequently, on BBC-TV. Tom is the artistic director of artsVOYAGE at Spencertown Academy in Spencertown, NY, a unique arts-in-education program that uses performing and visual arts to enhance learning across the K-12 curriculum. Tom Lee performs for adults in theaters and at festivals throughout the country. His richly evocative performances allow adults reacquaint themselves with the power of a well told story, and to reflect on their own response to ancient narratives. Tom is a frequent guest artist at the Metropolitan Museum of Art, where he brings together his passion for research, art, story, and for connection with new audiences. In addition, he is a performing arts partner with the Yale Center for British Art and the Metropolitan Opera Education Conference. Tom was a featuredteller at the International Storytelling Festival in Jonesborough, TN in 2014; in 2015 he returned to Jonesborough as teller-in-residence. In 2016 he was commissioned by the Blanton Museum of Art at the University of Texas in Austin to create a performance piece detailing the history of “The Crusader Bible,” a 12th century manuscript the was created in France but was taken by monks from Poland to Russia and Isfahan, only to end up in the Morgan Library in New York City. Out of this commission came Tom’s newest piece, a retelling of the biblical saga of King David titled “Prophets and Loss.” Tom lives in Chester, Connecticut where he cooks without fear and gardens overambitiously.

Brittana VersatilePoetiq Tatum was born at Hartford Hospital. She was raised for nine years in Simsbury, CT and ten years in Avon, CT. She played basketball throughout high school with aspirations of playing in college. In the fall of 2005 she attended University of Hartford as a marketing major. She put away her basketball sneakers and picked up a pen to become a Poet. She has been performing Spoken Word for 10 years and teaching Spoken Word for 8 years. She works for Charter Oak Cultural Center and Arts for Learning Connecticut. She taught Civic Engagement at Two Rivers Middle School to 35 (6th, 7th, and 8th graders) for her first teaching experience. She has also taught at Covenant Prep, Montessori Magnet School, Trinity Academy, YMCA, Boys & Girls Club, Milner elementary, SANDS School, and Albert E. Burr School in Hartford, CT. She has taught Spoken Word through out CT (New Haven, Windham, East Hartford, and Norwich to name a few towns. She performed in front of 20,000 people at The Greater Hartford Jazz Festival in 2019. She hosted the Trinity International Hip Hop Festival in 2019. Her stage name is VersatilePoetiq due to her universal appeal and unique mix of Spoken Word and Rap. She has all her students call her Ms. Versatile.