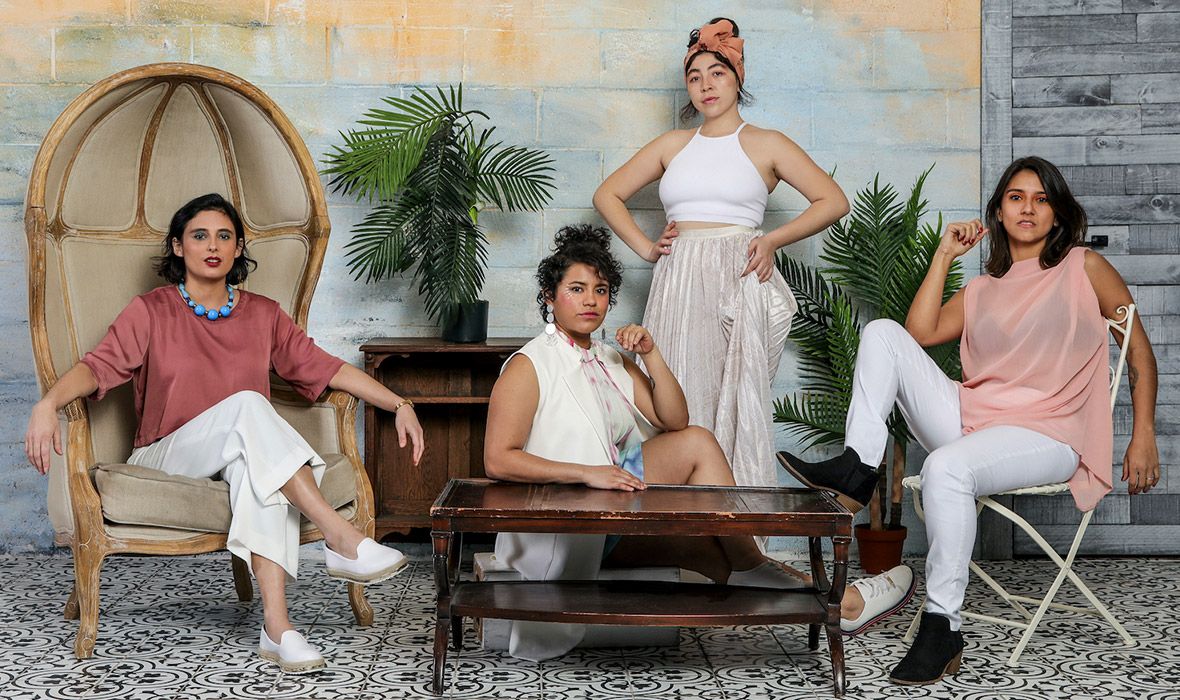 Ladama smile effortlessly almost the entire time they are performing. It’s hard not to join them, clapping and grinning as you’re carried away by the bubbling sound of the Venezuelan guitar of the plains (bandola llanera) or the Brazilian hand drum (pandeiro). This band of four women musicians and activists originating from Brazil, Colombia, Venezuela and the US have garnered ample praise for bucking “conventions of genre with confidence and vigor” (NPR), and for their women- and youth-empowerment workshops held in English, Spanish and Portuguese.

LADAMA is a group of four women, virtuosic musicians, and educators— Lara Klaus, Daniela Serna, Maria “Mafer Bandola” and Sara Lucas— from different countries and cultures of the Americas, who are sisters in song, rhythm and spirit. Harnessing music from their respective countries of origin, Brazil, Colombia, Venezuela and the United States, the group utilizes traditional and non-traditional instruments from across the Americas but with a modern twist to produce Latin Alternative music.

OYE MUJER, LADAMA’s 2nd full-length album released in the Summer of 2020, is a declaration to women and a call to humanity. Working with renowned Brazilian producer Kassin (Jorge Ben, Bebel Gilberto, Caetano Veloso), in his studio in Rio de Janeiro, the four women of LADAMA created a collection of songs sung in Spanish, Portuguese and English that channel the personal experiences of being human in the midst of global crises, unprecedented climate destruction and immigration. Having matured together since their debut, it is a bold step forward towards seamless musical and compositional unity as a band; now each “Dama” takes a turn as lead singer as the others support her as instrumentalists and arrangers. Where the first record was based on organic, roots percussion and rhythm, this one is charged, visceral and electric. Featuring collaborations with Betsayda Machado (Venezuela), Spok (Brazil), Eliot Krimsky (New York) and others, LADAMA soars as one with a fiery urgency that must be heard.

Lara, Daniela, Mafer and Sara uncovered a common dream of building communities through sound and empowering women and youth through music. Reimagining South American and Caribbean styles like cumbia, maracatu, onda nueva and joropo and blending them with soul, R&B and pop, LADAMA creates a new sound all their own. Together, the four shred on the Bandola Llanera from Venezuela, the Tambor Alegre from Colombia, and the Pandeiro from Northeastern Brazil.

With powerful vocals, often accompanied by Pat Swoboda on the bass, LADAMA delivers an utterly unique musical experience. LADAMA flows from the electric to the acoustic, from Spanish to English and Portuguese, and from the high plains of Venezuela to the Colombian coast. Their art proves that borders are meaningless, transporting us to a future where the world communicates across continents and cultures through sound and story.