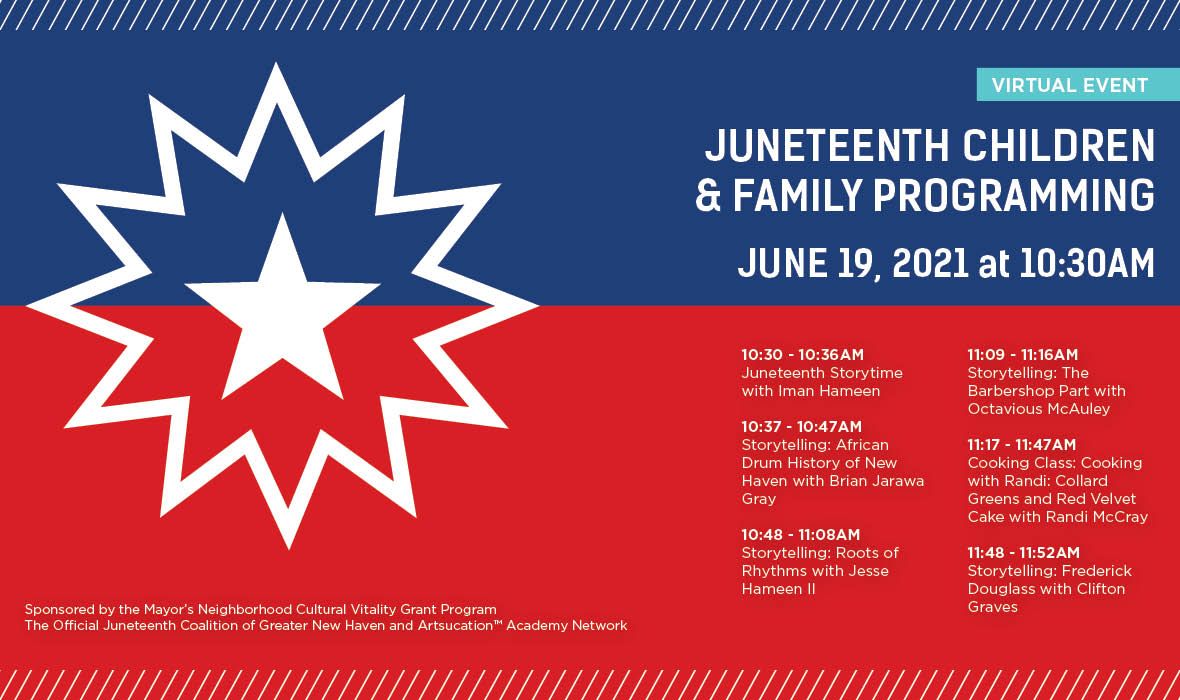 With the Official Juneteenth Coalition of Greater New Haven

This Juneteenth Day event for children and families will include storytelling by New Haven Educators and a cooking class by Randi McCray, Founder of Connecticut Urban Technology and the Urban Collective.

Founder of Connecticut Urban Technology and the Urban Collective

Randi McCray is a dynamic highly skilled facilitator with ten years experience leading group conversations, training, and workshops with diverse groups. Randi’s experience includes; leading two (2) diversity and inclusion initiatives at Yale University, facilitating the racial equity initiative for a school readiness council, and facilitating dialogue on topics of race, power, privilege and social change. Randi’s facilitation style is supportive, engaging, and warm. Her presence has led to the requests from diverse groups who want to be inclusive and community centered in their agendas. Randi feels that her role as facilitator is to guide dialogue that allows for all voices to be present in the conversation. It is on this premise she believes that true community and inclusive agendas can lead to sustainable change.

The journey of haircutting began for Octavious at 16 years old in 1985. This career journey began as a fun hobby cutting his own hair, and then his siblings' hair in the garage of his parents' home. He did not expect haircutting to become his livelihood, but he had spoken for years about being a business owner.

However 36 years later, licensed for 30 years,& now celebrating 25 years in business, he is proud to be a local business owner, barber stylist, and service provider. Today, the goal is to continue serving customers not just a great haircut but an exceptional service. His slogan QE&P which equals quality, excellence, and professionalism is what makes ProStyle different from most shops. Today, the standard of service he has created is what he desires to be mentored and nurtured in other potential barber stylists.

"Daily, I'm reminded of my simple beginnings in which I am grateful & thankful for my haircutting ability. I am also thankful for my long standing clientele, and the new clients which motivates me daily to continue giving a QE&P service!"

Iman Uqdah Hameen, formerly Robin Roper, of Branford and New Haven CT., is a retired educator with the New York City Public Schools. She holds Masters’ degrees in Early Childhood/Elementary Education, and Educational Building Administration and Supervision coupled with Advanced Certification in Staff Development. As an educator, she is a master teacher, staff developer and demonstration classroom specialist. She also has an undergraduate (BFA) degree in Film, Communications and Video and a minor in Journalism.

In addition, she is an awarded filmmaker, which earned her the distinction of being the first African-American female to win the coveted Picker Film Institute Sidney Meyers Best Film Award in Direction and Production (1987) at The City College of New York. Hameen’s winning thesis film, “unspoken conversation” was distributed by the Black Filmmakers Foundation (BFF) and Chamba Educational Films. As such it was screened in festivals around the U.S. and internationally and has been used in film studies and sociology departments at various universities. Her black and white short film was also sold to The Learning Channel (TLC) and broadcast on PBS as part of a 10-part women’s film series in the early 1990’s. Hameen attended Howard University, (pre-med) from 1970-72 after graduating from James Hillhouse High School in 1970. Her film is now a part of the Pearl Bowser permanent film collection in the Smithsonian National Museum of African American Culture and Art in Washington, DC.

Mrs. Hameen has also worked in the community for decades as an activist, organizer, teacher union leader, and sympathizer with several cultural, social, religious and political organizations around issues affecting the black community, education and society. As an organizer, she coordinated the African Day Parade (2011) in Harlem, NY replete with bands, artists, politicians, a stilt walker, ambassadors and contingents showcasing twenty African countries. A few years later, she helped to “save the Freddie” as parade coordinator (2015-2018) for the annual Elm City Freddy Fixer Parade, which is the largest African American parade in New England. As parade coordinator she shared her expertise and left a blueprint for future parade coordinators to follow.

She has been a member of the Official Juneteenth Coalition of Greater New Haven (JCGNH) for 8 years. Currently, her work centers around holding and attending forums, conferences, reading scripts, editing books, and writing curriculum for Artsucation Academy home schooling network. Iman Uqdah Hameen loves to travel and gives back whenever she can.

Drummer Jesse “Cheese” Hameen II is a Musician who is dedicated to utilizing his music to entertain and inspire people to attain a higher level of consciousness and human excellence. Jesse hopes the positive and educational messages in his music will encourage others to know conditions can be changed and that they can better their lives.

Born in New Haven, CT as “Jesse Kilpatrick, Jr.”, Hameen’s family upbringing and deeply-rooted background in gospel music, prepared him for his future in Afro-Cuban, R&B, and Jazz. At the age of ten (1951), Jesse and his friends formed an Afro-Cuban band named The "Cuban Knights". The band was lead by their teachers, Paul Huggins and Bill Fitch. The “Cuban Knights” performed in the New Haven area for about two years. Jesse began successful road tours in 1963 and has since traveled and performed extensively throughout the United States, Europe, Africa, the Caribbean, Canada and Mexico. He has been leading his own group, "Elevation", since 1976.

Jesse has performed with countless musicians throughout his professional career which spans more than 60 years and continues to this day! Jesse is President and Founder of Inspire Productions Recording Company, which has released “Give Your Life to God” and “Sign Of The Times” by Jesse Hameen Il, “Why Don’t You Say, Yes Sometime?” by trombonist Benny Powell and “Hit It” by the Neo Bass Ensemble.The company has produced two releases for the Savant Record Label, “Thanks To You” and ” Moving Out” by vocalist Ms. Irene Reid, Jesse "Cheese" Hameen ll has taught music as an adjunct professor at The Hartford Conservatory of Music, Betsy Ross Arts Magnet Middle School, ECA (Educational Center for The Arts High School), both in New Haven, CT, Clara Muhammad School in Corona NY, Jazzmobile in NYC. He has participated in workshops and seminars in the NYC public schools and libraries for over fifty years.

Jesse is currently on the faculty of Neighborhood Music School (NMS) and is the Director of the NMS Summer Jazz Program (New Haven, CT). He also teaches a course at Gordon College in MA. Jesse is one of the founders of the rejuvenated New Haven Jazz Festival, started in 2008. He is on the Board of Directors for Jazz Haven, which is the presenting organization for the Jazz Festival. He is also a Commissioner for Arts and Culture in New Haven, CT.

I am from the Bronx, New York, now currently residing in New Haven CT. I am a proud father of four children. I am a Hair Technician who specializes in making people look good. If your hair is not becoming of you, it is because you have not yet come to me. I am also the Founder of M.M.A.D. (Men Making a Difference). "I believe that it's time for men to make a difference. If men don't make a difference, then there won't be a difference made".
Sat, June 19, 2021 - 10:30am
1 hr 30 min
My account
Cart