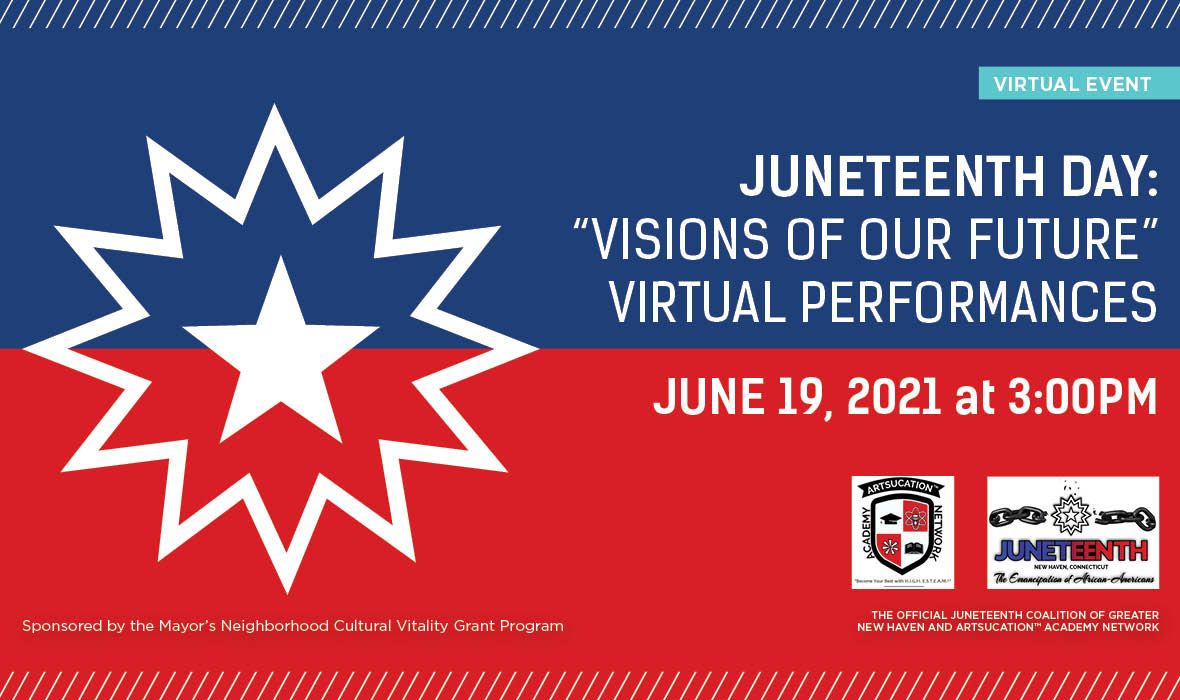 With the Official Juneteenth Coalition of Greater New Haven

Join us on Juneteenth for the "Visions of Our Future" virtual performances. The artists performing will be M'Bosse Dance Company of Senegal and Keepers of the Culture Performing Arts Company with music by Elder Brian Jarawa Gray, Antwain Johnson, Jr. as Fred Hampton, and the Rahsaan Langley Project. This event will be hosted by Hanan Hameen, Co-Founder of the Official Juneteenth Coalition of Greater New Haven.

Co-Founder of the Official Juneteenth Coalition of Greater New Haven

My name is Antwain Johnson Jr. but I go by "AJ". I am 14 years old. I currently attend Barnard Magnet School and I am going to attend Notre Dame High School next year. I am the future Youth President of Ice The Beef. I have helped to create many community events, marches and rallies. When I grow up I will become an actor and entrepreneur.

The Keepers of the Culture Performing Arts Company (KCPAC) was created by Ms. Hanan Hameen, Doctoral Candidate, as a means to display cultures of the African diaspora through live dance, song, and music. Our members include our Artsucators who teach and facilitate programs in the community and schools using the Artsucation curriculum and teaching methodology. Artsucation™ is the formal and successful interdisciplinary application of the Arts as creative sciences with traditional academic subjects. Our mission is to provide young people, ages 3 to 21, with passion, drive, and creative and leadership skills in order to elevate their sense of self-worth and make them more productive adults in society by offering instructional programs in dance and music that are embedded with history, literacy and social context elements, whereby the participants will be given responsibilities and opportunities to experience success in every lesson.

Mbosse Dance Company is the first professional 100% Contemporary and 100% local dance company based in Kaolack. A company that started to exist in 2015 through its Artistic Director Baidy Ba and as an individual artist. The activities of this project took it to France in 2017, to England and to Brazil in 2018 and during the same year Senegal hosted the project. In a collaboration between Italy, London, Spain and Senegal July 2018, the company has been invited to do a collective work with these countries and presents a solo titled MIRROR at the Chelsea Theater in London as part of the project. As part of the Trans Musical Festival of Rennes (France) December 2019, Baidy Ba was invited to perform with the music group Guiss Guiss Bou Bess from Dakar, thus followed a tour of the concept Sabar Fusion in Collaboration between Mbosse Dance Company and Movement Deco by Baidy Ba followed in Italy (Roma) and Greece (Athens) January 2020. It is in 2019 that the company was able to expand with today 13 members including eight (8) dancer performers, A Choreographer and Artistic Director, A Co-Choreographer, a Co-Artistic Director and two (2) musicians. With the company's contribution to the development of the dance sector in Kaolack, the first mixed dance center was created, including the “Mbosse Dance Training Center”. A center based on the Alliance Française de Kaolack and which has now trained more than 50 young schoolchildren. Still for the development of the Dance sector, the structuring and professionalization of actors in the sector and within the framework of Covid-19; the company, in collaboration with the association Saloum Rapatak organizes the Dundee Art Project Concept which is an online training project in interpretation and choreography, an online dance competition and awareness videos of short films dancing on the current Kaolack during the pandemic period. This project will last 4 months and funded by the French institute. To finish this list which is far from being finished, the company is working today on its first major collective production of 100% Afro, Hip hop and contemporary dance in Kaolack entitled “SELE BE YONE” which was present in front of the Chef de the cultural cooperation of the French Embassy and as part of its courtesy visit to Kaolack (Alliance Française de Kaolack). This piece is also present at the 11th edition of the Kay Fecc Festival 2021 in Dakar.

Rahsaan Langley performs high-energy dance music reminiscent of the golden oldies mixed with today's hits for all ages to enjoy while dancing & singing along. Rahsaan's voice is refined, smooth, and soothes the soul. He has the ability to show emotions through his music and brings listeners to a happier place. Rahsaan has been in the business for more than 20 years and has helped develop, create, and produce some of the most influential songs and artists in the industry. He toured with seasoned artists like the late great Gerald Levert, R Kelly, Mint Condition, and Uncle Charlie, and aided with Big L’s success in going gold. Rahsaan worked for years as an in-house producer for Teddy Riley and worked side by side and produced for Lauryn Hill, Talib Kweli, Joe Budden, Gerald Albright, Tony Toni Tone, 702, Misa(Japan), Teddy Pendergrass, Tony Terry, Bobby Brown, Whitney Houston, Glenn Jones, Blackstreet, Wrecks N Effect, David Miller, Shomari, The Fugees, and LL Cool J.