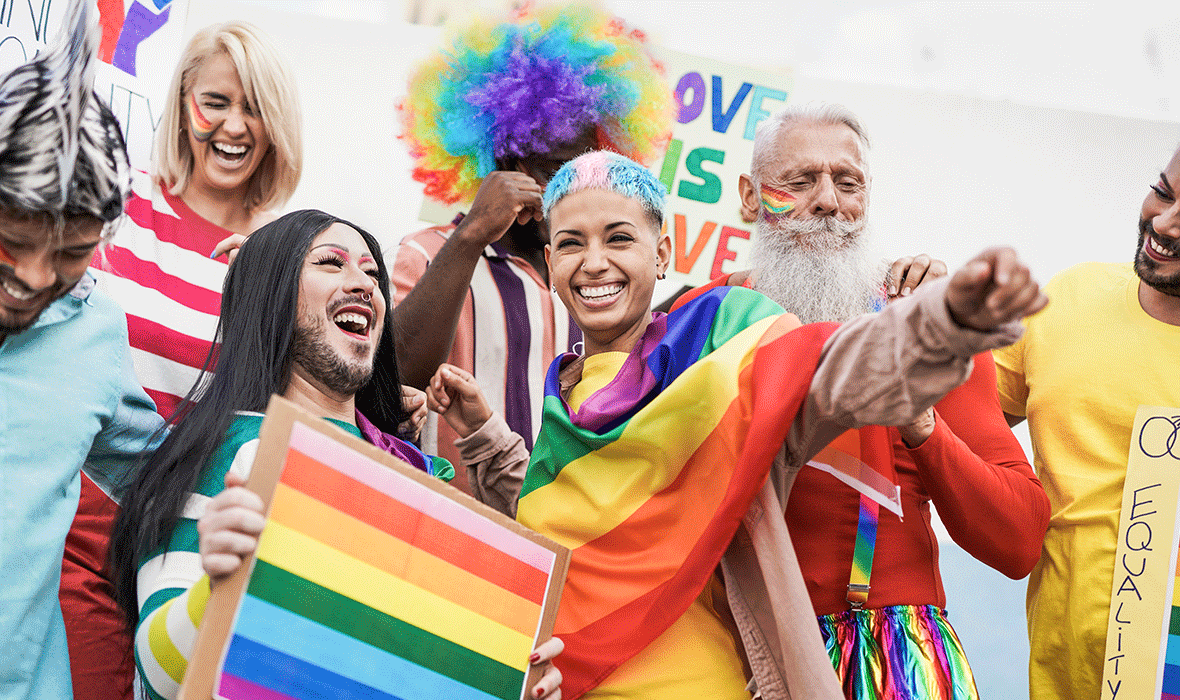 In partnership with the New Haven Pride Center

In 2020, the New Haven Pride Center launched a new type of programs titled “Days of Action,'' that emerged as an idea from our community-focused panels and conversations series. Each Day of Action consists of workshops, conversations, and artistic experiences focused on themes of gender equity, racial justice, and LGBTQ+ Latinx experiences.

These mini-conferences aim to foster an immersive environment to educate, mobilize, and challenge participants to combat divisive issues of injustice within the community. The Center believes that the Days of Action workshops and trainings empower our present and future thought leaders to tackle challenges faced by our community.

The Center’s second Day of Action for 2022 will take place on Sunday, June 12, 2022, and is dedicated to the diverse needs and struggles of LGBTQ+ Black, Indigenous, and People of Color (BIPOC). This mini-conference will aim to directly combat racism through discussion, group learning, and artistic perspectives. It is presented in partnership with the International Festival of Arts & Ideas.

To welcome and to set the tone for the second Day of Action for 2022, we kick-off the day’s programming with a special artistic presentation by Transgender poet and political leader Andrea Jenkins. The full day will be focused on racial justice, combating racism, and confronting demons within our own community contributing to anti-blackness and anti-immigrant sentiment so the goal of this program is to center the audience in art as we prepare to tackle series conversations.

@ 11:00a | Panel : Closing the Generational Wealth Gap : How do we Empower Queer BIPOC Entrepreneurs?

Queer Entrepreneurship is on the rise as our state and country solidify LGBTQ+ arts with laws of protection and equality. Similar to the straight community however, generational wealth gap for BIPOC Queer folks is still a reality, one that is often also impacted by other factors such as structural racism. How do we as a community uplift and empower our BIPOC entrepreneurs and ensure that they have not just the support but also the resources for success.

Similar to the straight community, Asian representation within the Queer Community is nearly nonexistent. We must do better as a community of uplifting our Queer Asian siblings. In this panel we will discuss and explore the idea of representation within the community, talk about the ways in which we could do better, and explore the stigmas and racism faced by Queer Asians, including anti-Asian racism and the fetishization of Queer Asians’ sexualities and bodies.

Join us for a 45-minute movement and sound healing workshop. This workshop was created to be accessible for all bodies.

Black Brown and Queer folks' bodies are politicalized whether we want them to be or not. We are Facing a constant onslaught of intersectional oppressions, if we don’t work to let go of how these constant assaults sit in and on our bodies it manifests itself as blocks, blocks to our self love, intimacy, self worth and awareness. Join us in a homage to intentional healing and movement.

Beginners and experts are welcome. We will tap into and invigorate our 7 core chakras. We will also honor our bodies in all their splendor. Dress comfortably!!!

This workshop will be led by ala ochumare.

What is my role in the fight for racial justice as a white person? How do I begin or deepen my support of Black and Brown Queer and Trans folx? What kind of ancestor do I want to be?

This workshop is a space to ask questions and reflect about how white people can act for racial justice. We will raise awareness of some ways that white folks disconnect and cause harm in multiracial justice spaces, assess how we have been contributing to or hindering collective liberation, and identify ways to do better.

This workshop will be co-facilitated by Katie Jones and Joy Meikle, co-founders of Reclaiming Our Whole Selves, a white affinity racial healing series.

Dr. Justin B Terry-Smith, DrPH is an Air Force disabled veteran and a recognized HIV/AIDS activist and public health expert. He is also a proud Black LGBTQ+ Jewish man. In this conversation, Dr. Terry-Smith sits down with local Health Equity and Racial Justice advocate Ala Ochumare to talk about Health Equity and Public Health through the lens of being a Black Queer person. How do these combined identities effect access to healthcare and services. How does racism impact public health? How can we successfully advocate for better healthcare for our Queer BIPOC siblings? This conversation will feature perspectives from Public Health expert and LGBTQ+ advocate Dr. Justin B Terry-Smith, DrPH with Founder of Black Lives Matter New Haven and Center Director of Youth Services Ala Ochumare.

Andrea Jenkins (she/her) is a writer, performance artist, poet, and transgender activist. She is the first African American openly trans woman to be elected to office in the United States. Jenkins moved to Minnesota to attend the University of Minnesota in 1979.She worked as a Vocational Counselor for Hennepin County government, for a decade. Jenkins worked as a staff member on the Minneapolis City Council for 12 years before beginning work as curator of the Transgender Oral History Project at the University of Minnesota's Jean-Nickolaus Tretter Collection in Gay, Lesbian, Bisexual and Transgender Studies.

She holds a Masters Degree in Community Development from Southern New Hampshire University, a MFA in Creative Writing from Hamline University and a Bachelors Degrees in Human Services from Metropolitan State University. She is a nationally and internationally recognized writer and artist, a 2011 Bush Fellow to advance the work of transgender inclusion, and the recipient of numerous awards and fellowships. In 2018 she completed the Senior Executives in State and Local Government at Harvard University.

The New Haven Pride Center dates back to 1993, when a group of activists advocated for domestic partnership recognition by the City of New Haven and the Board of Aldermen of New Haven. Similar to Hartford’s legislation, this would have allowed same-sex couples to symbolically register their relationships in a public forum as well as give them access to additional benefits. At the time the Board of Aldermen didn’t approve the legislation. Following this civil rights loss, New Haven Pride Center founder John D. Allen, Ed.D. conducted a needs assessment for the regional LGBTQ+ community as part of his graduate thesis at Southern Connecticut State University.

His survey revealed a vibrant regional LGBTQ+ culture of dozens of LGBTQ+ and LGBTQ+ friendly groups. John’s study also showed that despite there being a vibrant community, there was no single gathering space where different gender identities and orientations within the community could come together. This influenced him to want to create a space for gathering, meeting, and organizing. On May 27, 1996, the Center was officially incorporated, and on November 17, 1996 the Center opened its doors to the community.

Since its founding, the New Haven Pride Center has worked hard to create a safe space within the Greater New Haven community for support groups, LGBTQ+ programming, advocacy work, and activism. Over the past two-plus decades the Center has been a home to many community grounds and peer-led programs including our longest standing support group – the Rainbow Support Group for individuals with disabilities. This group was the first of its kind in the nation and has been used as a model across the country.

In June 2017 the Center announced its move from an all-volunteer run non-profit to a staffed institution with our first employee, Patrick Dunn who started on August 1, 2017. Since then the Center has grown tremendously adding numerous support groups and social programs, creating a rotating gallery space allowing for LGBTQ+ art installations, expanding existing programming including PRIDE New Haven, and elevating the conversation around city and state-level advocacy.