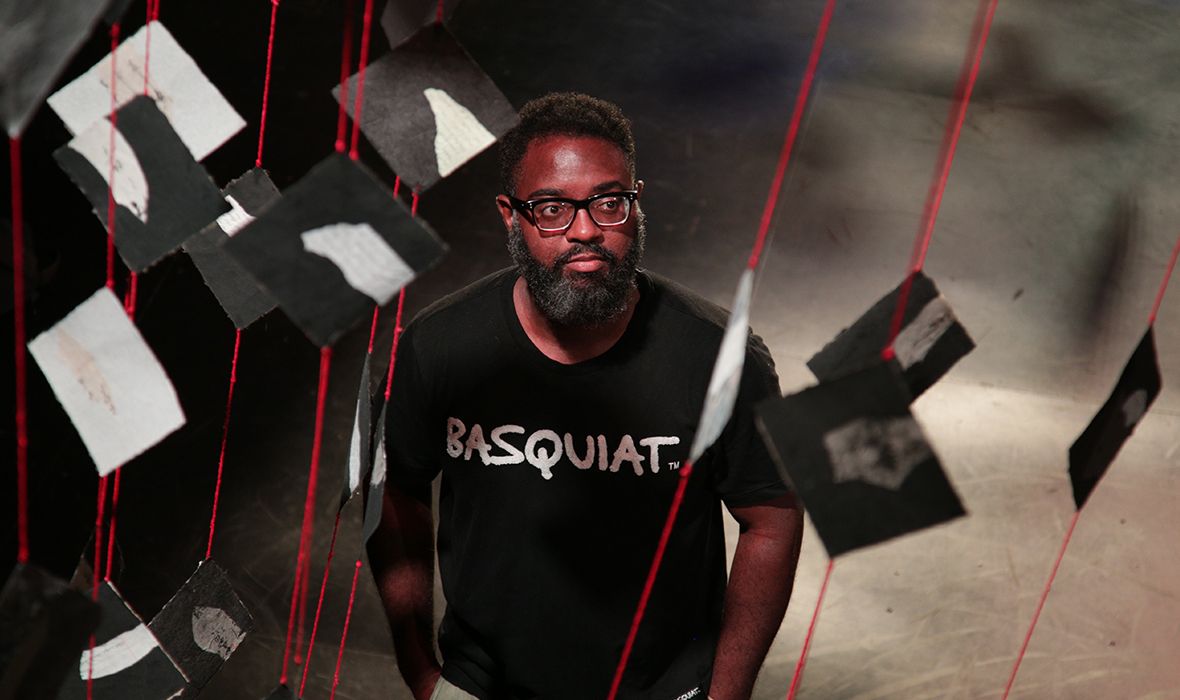 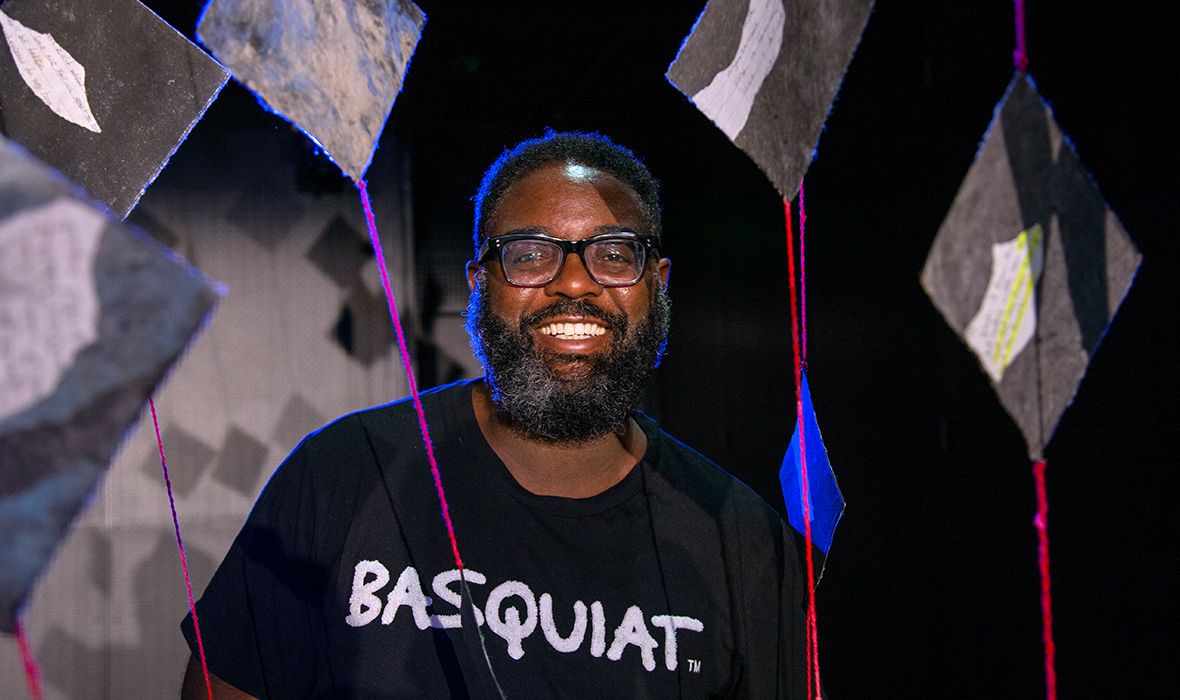 Alone in solitary confinement, a teenager called out to the men in the hole with him: “Somebody, send me a book!” Moments later, Dudley Randall’s The Black Poets slid under his cell door. Those pages, in that funky and desperate place, were the start of the teen’s transformation into a poet, lawyer, and promoter of the rights of prisoners. Now, 23 years after his release from prison, Reginald Dwayne Betts explores the experience and lingering consequences of having a criminal record in a solo theater show based on his poetry collection, Felon. Betts, who recently received a MacArthur “Genius” Fellowship, advocates for literacy in prisons and is the founding director nonprofit organization Freedom Reads, which delivers books to inmates and brings contemporary writers and artists together with incarcerated audiences.

In October 2018, the New York Times Magazine published Reginald Dwayne Betts long essay “Getting Out.” Several months later, the piece was awarded a National Magazine Award. The publication was another example of Betts entering into a new genre and bringing the same depth and richness of self-reflection and exploration of the central problem of this generation: incarceration and its effects of families and communities.

Reginald Dwayne Betts transformed himself from a sixteen-year old kid sentenced to nine-years in prison to a critically acclaimed writer and graduate of the Yale Law School. He has written three acclaimed collections of poetry, the recently published Felon, Bastards of the Reagan Era and Shahid Reads His Own Palm.

When awarded Betts the PEN New England Award for poetry for his collection Bastards of the Reagan Era, judge Mark Doty said:

"Betts has written an indelible lament for a generation, a necessary book for this American moment."

His memoir, A Question of Freedom: A Memoir of Learning, Survival, and Coming of Age in Prison, is the story of a young man confined in the worst prisons in the state of Virginia, where solitary confinement, horrific conditions, and the constant violence threatened to break his humanity. Instead, Betts used the time to turn himself into a poet, a scholar, and an advocate for the reform of the criminal justice system.

Elise Thoron is playwright, director, creator of new theater work. She works cross-culturally abroad and within the United States, collaborating with poets, musicians, and fine artists, using multiple languages to create unique performances.  For over a decade she has collaborated with Japanese paper artist, Kyoko Ibe on Recycling: washi tales with a company of American and Japanese traditional performers. Her Afro-Cuban Yiddish opera, Hatuey: Memory of Fire, with composer Frank London, went from Sundance Theater Lab to a production at Opera de la Calle in Havana, to Peak Performances (USA). For over twenty years, Elise created cross-cultural exchanges with Russian and American theater artists; she adapted and directed The Great Gatsby in Russian at The Pushkin Theater in Moscow, where it played for nine years.  She is the co-founding Artistic Director of Literature to Life, a highly successful theater literacy program, now in its third decade nationwide, adapting books into solo performances with educational discussion to spark a passion for reading and writing in young people. www.elisethoron.com

Jane Cox is a lighting designer working in theater, opera and dance, and the director of the Program in Theater at Princeton University. She is lucky enough to have long standing collaborations with directors John Doyle, Ruben Santiago-Hudson, Sam Gold and Elise Thoron, and has been a member of the Monica Bill Barnes dance company for more than twenty years. Career highlights include The Color Purple and Jitney on Broadway; Hamlet in London and Lucia di Lammermoor at Sydney Opera House. Jane has been nominated for three Tony awards - for the current Broadway production of Macbeth, for August Wilson’s Jitney and for Sophie Treadwell's Machinal. At Princeton, Jane has focused on more inclusive theatrical story-telling, with a specific focus on making the work of Black artists more visible, and on deepening the program's relationship with contemporary American theater making.

Palmer Hefferan is a sound designer and composer for theater, audio dramas and podcasts. She recently became the first woman to be solo nominated for a Tony Award for “Best Sound Design of a Play” for her work on Thornton Wilder’s The Skin of Our Teeth on Broadway at Lincoln Center Theater.  Palmer was a member of Broadway’s history-making first all-female design team on the production of The Lifespan Of A Fact at Studio 54 in 2018. She is the recipient of a 2019 Obie Award for “Sustained Excellence in Sound Design” for her work in the 2018-2019 Off-Broadway theater season and received a Henry Hewes Award and a Drama Desk nomination for her sound design for Today Is My Birthday, for which she performed live foley. This summer, Audible will release Long Day’s Journey Into Night as an audio play featuring performances by Bill Camp and Elizabeth Marvel featuring sound design by Palmer. She has collaborated with numerous New York theaters including Manhattan Theatre Club, Roundabout Theatre Company, Second Stage, Signature Theatre, The Public, Soho Rep, and MCC Theater. You can read more about her work in the article "WOMEN MAKING (SOUND) WAVES: Reflections from six leading sound designers” published online in Dramatics magazine. You can listen to her work at www.palmerhefferan.com

Tess James (she/hers) is a freelance Lighting Designer and Associate.  Her recent projects as a designer include Assassins and The Cradle Will Rock at Classic Stage Company, and The Running Show with Monica Bill Barnes & Company. As an associate designer her work has included Macbeth, True West, King Lear and The Color Purple on Broadway as well as Soft Power at The Public Theatre. Throughout her career she has working with an array of amazing intuitions including BAM, New York City Center and New York City Center.  She is a Master Teaching Artist with Roundabout’s Theatre Workforce Development Program as well as a full-time faculty member in the Program in Theatre at Princeton University.

Tyler Sperrazza is a production manager and lighting designer focusing on supporting devised, solo performance work, and dance. He served as the resident lighting designer for Fuse Productions in central PA from 2013 to 2020, and for Boundless Bodies Contemporary Ballet company from 2017 to 2020. He developed a love for solo performance and devised work while serving as lighting designer and touring production manager for William Doan’s solo performance pieces: Drifting and The My Anxiety Project. In addition to his work on Felon, Tyler is the Production Manager of Freedom Reads. He earned his Ph.D. in History and African American & Diaspora Studies from Penn State University and holds a BA in Theater Arts & History from Le Moyne College. www.tylersperrazza.com