Home Events One City, One Read: Parable of the Sower Film Screening: Zerzura 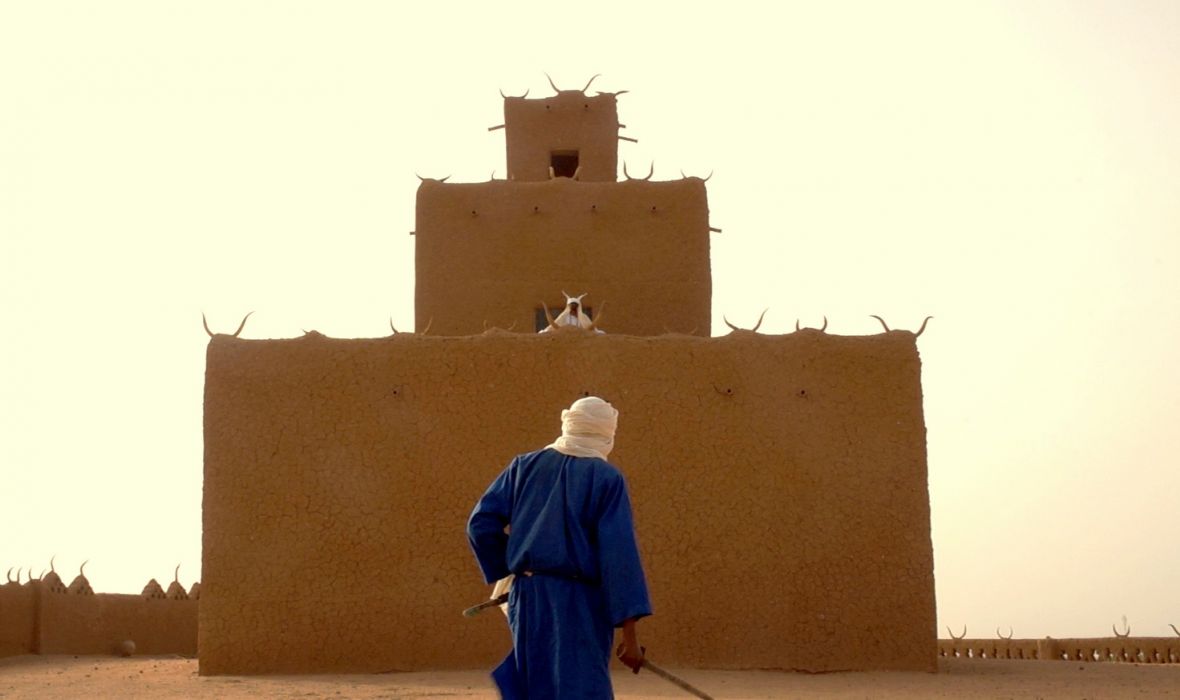 Kick back at the Q House to enjoy the feature-length film Zerzura (2017). Pulling double duty as the leading role and soundtracked by the isolated guitar intricacies of Ahmoudou Madassane, Zerzura follows the journey of a young Nigerian man in his search for an enchanted oasis, and explores key themes of migration and exoticism. Directed and co-produced by Christopher Kirkley, and written and developed by a local Tuareg cast, this genre-defying film acts as a modern folktale merged with elements of ethnofiction. Creating a dynamic approach to the hero’s journey, Zerzura offers a mystifying viewing experience as what has been dubbed the “first-ever ethnographic acid Western.”

This film will be introduced by Christopher Kirkley, the film's director and the owner of Sahel Sounds.

Your safety is our priority: we are monitoring COVID 19 and will be updating our safety measures for all programming to local and state guidelines later in the Spring.

"I shall continue to think that Zerzura is one of the many names that have been given to the many fabulous cities which the mystery of the great North African desert has for ages created in the minds of those to whom it was hardly accessible." Reginald Bagnold, March 1937

The story of Zerzura first appears in the Kitab Al Kanuz (“Book of Hidden Treasures”), a mysterious 13th century lost manuscript. Translated as the “oasis of little birds,” it is a magical place, a city of treasures, guarded by supernatural forces. There is no further mention until 1835, when European Egyptologist John Gardner Wilkinson discovers yet another account from the Emir of Benghazi. The "Zerzura Club" is formed, and there is feverish exploration throughout the 1920s to find the lost city.

In the Aïr, the name “Zerzura” is known as a nameless but dangerous oasis. The first written account comes from 1902, of an “enchanted oasis…belong[ing] to the genii” with "golden domes and minarets” and "inhabited by women more beautiful than houris,” of which only one man has ever returned.

To this day, Zerzura has not been found.

In the past years, while traipsing about the Sahara, one of the most frequent conversations is about place, the ubiquitous “West.” The thoughts and expectations of America (or Europe) are mythic, fantastical, and loaded with exoticism. I began to speculate the stories were not about "the West" at all. It was in this research that I came across the story of Zerzura - a myth has persisted over the centuries in mistranslation between cultures.

I wanted to create a real search for Zerzura. In a land of open deserts and lawless borderlands, the genre style of "Western" seemed a natural model. But we also wanted to incorporate the rich folklore and supernatural stories that permeate everday life. While researching locations, I encountered the surreal structures of Swiss artist NOT VITAL, hulking architectural wonders that surround Agadez. We used these constructions as an inspiration and backdrop to imagine and journey into the fantastic.

Watch the trailer for ZERZURA here.

Christopher Kirkley is an ethnographer focused on the Sahelian countries of West Africa. His work both documents and produces cultural artifacts through field recordings, mp3 archiving, cellphone data collection, and experimental filmmaking. Driven by an ethos of collaborative practice, his projects are experiments in cross-cultural experiences. Spanning cultural barriers and borders for multiple audiences, Christopher believes that we can reveal ethnographic truths through artistic expression, imagination, and dreams. Under the label Sahel Sounds, he produces records and films that document popular musical phenomena, while working collaboratively with a number of artists across six countries.