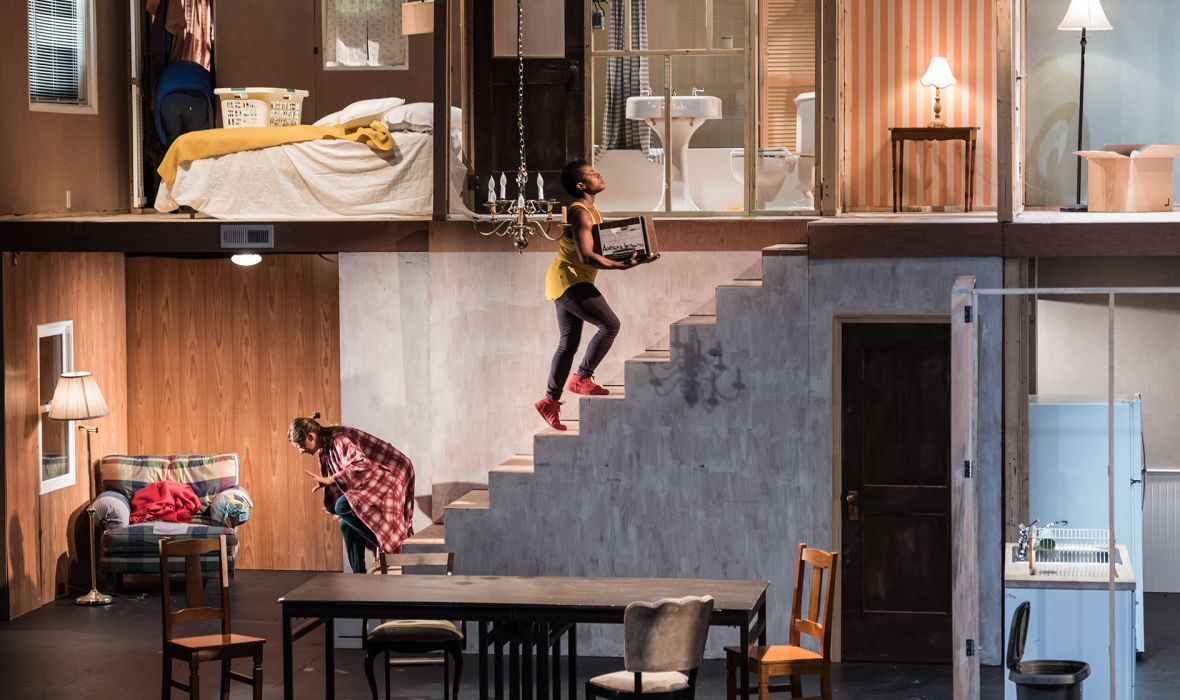 Geoff Sobelle builds a HOME at the International Festival

I hadn’t intended to get married when I left the house this afternoon.

But by 5pm, I had a new husband – a stranger I had never met – who drank wine and toasted me with a moving but silent speech before hundreds, during a sumptuous, slightly surreal celebration that all but brought a tear to my eye.

I had become tangled in the audience improvisation surrounding Geoff Sobelle’s delightful HOME; an uplifting foray into physical theatre and existential clowning that elevates the meaning of social interaction into heady, graceful realms.

And, many rooms and situations later, including my wedding festivities, complete with strings of fairy lights, a veil and flowers, a rousing Balkan-style band, dancing, socialising and authentic rejoicing, the Edinburgh International Festival crowd at the King’s Theatre were on their feet, baying for more.

The performance begins as a DIY project in home building – planks of wood and plastic sheets are stapled together as a one storey dwelling rapidly takes shape, complete with dining room, kitchen, bedroom, bathroom and study. Toilets, showers, sinks, fridges, sofas, lamps, and flowers materialise.

In fact, just about everything we see is an everyday exercise in nest building.

And as the structure takes shape, we become party to the thrills and spills of a series of lives lived – including different aspects and times of the same ones – behind usually closed doors.

From the excitement of moving in, to the more mundane habits and rituals of the day-to-day, and life events from birth, death and marriage, academic achievement and career building, we march with time at a rate of knots.

Following the routines and even personal ablutions of the cast members, who are largely unscripted, is as gripping as any Discovery Channel lens on human anthropology.

Creator, GEOFF SOBELLE, magician, actor clown and mimic, with schooling at Ecole Jacques Lecocq in Paris amongst his credentials, brings us to witness the relentless cycle of life. And his absurdist, stylishly choreographed take on the theme is utterly compelling from start to finish.

As all these different owners and generations inhabit the same premises, with their individual dramas and personalities, before departing, what may seem to be just a static structure takes on its own life form.

Sobelle approaches the work with a wit that peaks with lots of naked bodies in the bathroom, all trying to climb into the same shower at the same time. Others emerge from the same bed or, in a great optical illusion, back out of the fridge, one after another, as they rise, grab breakfast and prepare for their days.

The set design by Steven Dufala, who has worked with Sobelle before is ambitious and somewhat heroic given the stampede it endures.

Lighting by Christopher Kuhl, is sublime and at times mesmeric. We witness the calm of the house at the dead of night; cicadas buzzing and moths batting against back-lit windows.  A few hours later it is bathed in the morning light, when absolute detail to the quality of that time of day and it’s stillness, is just magical.

But the real bravery of this performance comes with the direction from, Lee Sunday Evans, and a cast able to blur the lines between themselves and the audience, inviting them on stage to engage in play. What could be chaos appears seamless.

A house party turns into a wedding party; we see graduations, teenage delinquency, christenings and even a funeral. And the new actors quickly become convincing players or quiet bystanders thanks to deft instruction from the professionals.

Sobelle has said he hopes the show: “makes space for the audience to dream – to fill the work with their own lives and memories, thus enacting the experience of living in and creating a home.”

He came upon the idea moving into a new home himself and lifting the linoleum to replace it only to discover other flooring beneath in a series of layers.

Engaging with his sister, dramaturg and academic, Stefanie Sobelle, who is well-versed in the literature of houses and architecture, they began to lay down some exciting foundations.

HOME is both poetic and prosaic. Music by Elvis Perkins is beguiling.

The whole thing is a delightful glimpse into the everyday through a generous keyhole, that sprinkles the proceedings with enough stardust to make for a magical encounter.

Don't miss HOME at the University Theater from June 19-22. Learn more about the show and get tickets here >