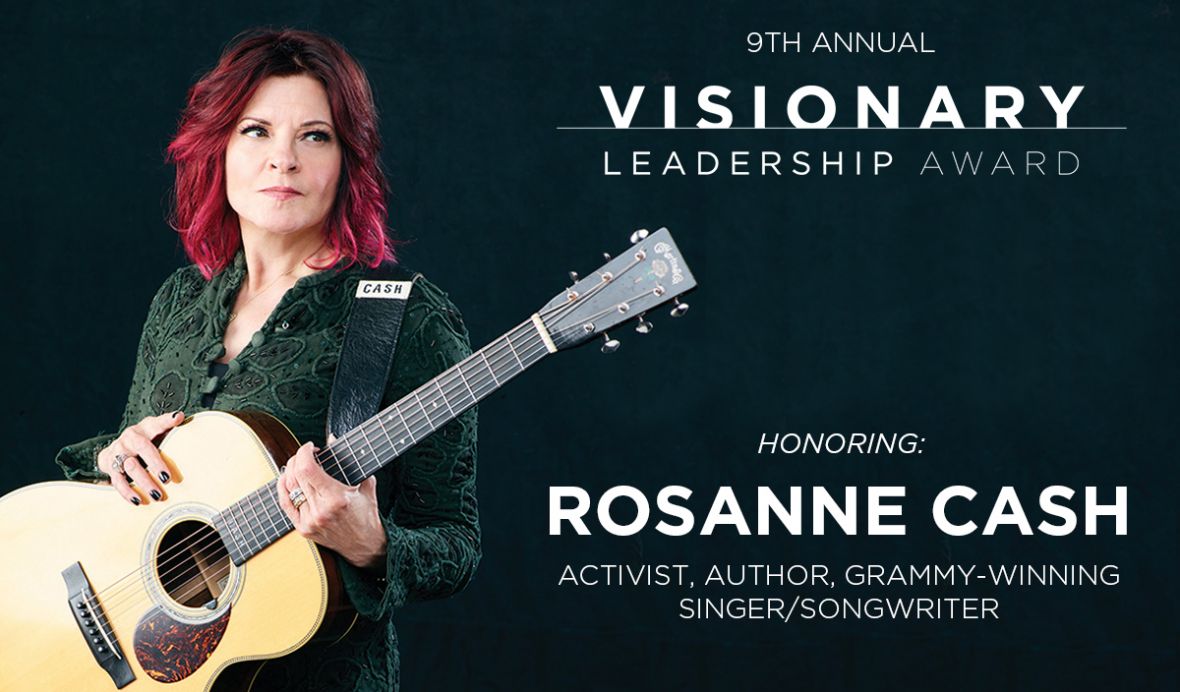 Join us on Tuesday, February 26th for the 9th annual Visionary Leadership Award Luncheon and Conversation. The Award Luncheon, which draws over 400 attendees from across the region, raises money for the Festival's diverse roster of programming presented in June each year. The award, established in 2010 in honor of Festival co-Founder Jean M. Handley, is awarded to a Visionary Leader whose trailblazing work is impacting the world.

One of America’s pre-eminent singer-songwriters, Rosanne Cash has released 15 albums of extraordinary songs that have earned four GRAMMY Awards and nominations for 11 more. She has actively advocated against gun violence and is a longtime board member of PAX and the Brady Campaign to Prevent Gun Violence. She wrote an op-ed piece on gun control for the New York Times following the 2017 mass shooting in Las Vegas. Rosanne is also a board member of the Content Creators Coalition (C3), a membership-based, artist-run non-profit advocacy group representing creators in the digital landscape. In 2014, Cash represented artists in testimony before Congress on the issue of intellectual property rights and digital music licensing. She is also an author whose four books include the best-selling memoir, Composed, which the Chicago Tribune called “one of the best accounts of an American life you’ll likely ever read.” Her essays have appeared in The New York Times, Rolling Stone, the ­Oxford-American, The Nation, and many more publications. In addition to continual worldwide touring, Cash has partnered in programming or served as artist in residence at Carnegie Hall, Lincoln Center, San Francisco Jazz, the Minnesota Orchestra, and The Library of Congress.

She was awarded the SAG/AFTRA Lifetime Achievement Award for Sound Recordings in 2012, and she received the 2014 Smithsonian Ingenuity Award in the Performing Arts. She was chosen as a Perspective Series Artist at Carnegie Hall and hosted four concerts during their 2015–16 season. In 2015, she was inducted into the Nashville Songwriters’ Hall of Fame. In 2018, she was the recipient of the “Spirit of Americana” Free Speech Award presented by the Americana Music Association in partnership with the First Amendment Center.

All proceeds from the Award Luncheon support The Jean Handley Fund for the International Festival of Arts & Ideas. This fund supports programming at the Festival that follows the passions and interests of our co-Founder, Jean. In the past this Fund has supported world and U.S. premieres, free programming, and Festival-commissioned works.

More about the Visionary Leadership Award >