Home Festival Blog What is Garba? The Meaning Behind the Tradition 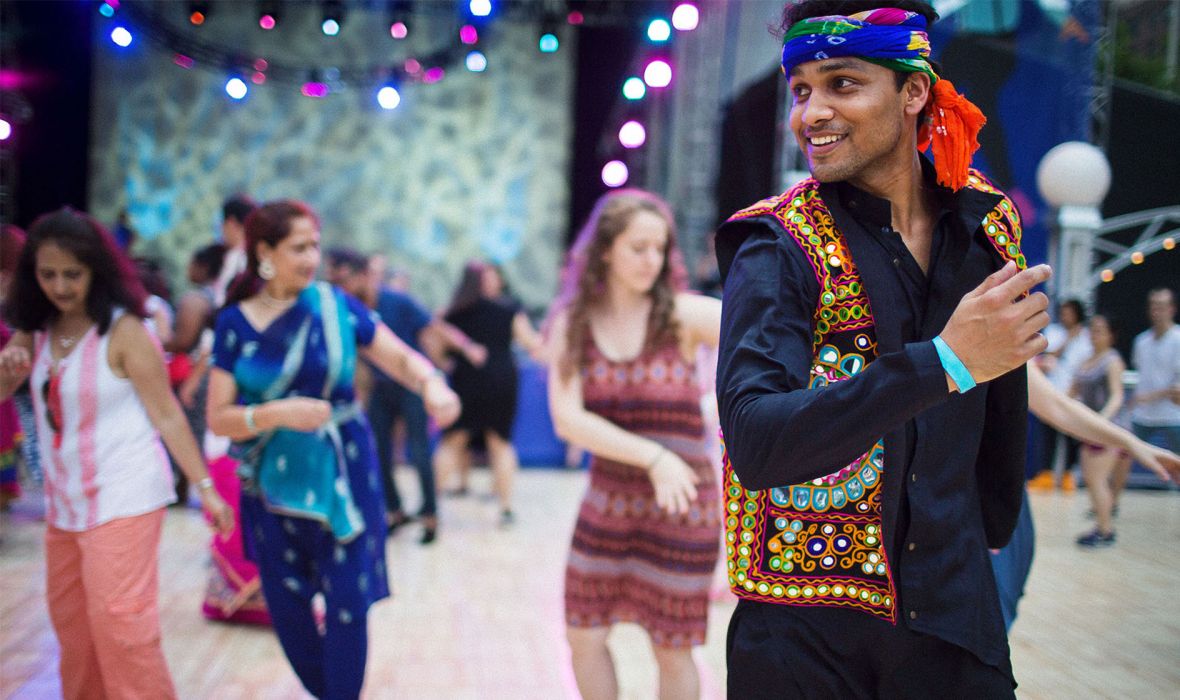 What is Garba? The Meaning Behind the Tradition

What is the history behind garba? Read on for a guide to garba (courtesy of the Lincoln Center), the Indian dance tradition that Garba360 will bring to New Haven for the first time this summer.

Garba is a form of dance, as well as a religious and social event that originates in Gujarat, India.
Garba is a community circle dance from the northwestern Indian state of Gujarat. The word "garba" is also used to refer to the event at which the garba is performed. The dance form originated in the villages of Gujarat, where it was (and continues to be) performed in communal gathering spaces in the center of the village with the entire community participating. As with many social events that happen in rural areas, garba also has religious significance.

Garba is performed during Navratri, the longest and largest dance festival in the world.
Navratri, literally meaning "nine nights," is the Hindu festival dedicated to Durga—the feminine form of divinity and her nine forms, from the fierce sword-wielding Kaalratri to the smiling creator of the universe Kushmanda. This festival is observed in many ways, each unique to the region of India in which it is celebrated. In Gujarat, it is observed with nine nights of dancing as a form of veneration and worship. Starting in the evening, men and women dance late into the night in honor of Durga. Many people also fast or observe a special diet with restricted foods during these nine days and nights. And while garba is central to Navratri observances in Gujarat, it is not exclusively performed only during Navratri. Garba also is performed during social events such as weddings and parties.

Garba is layered with symbolism of the feminine divine and cyclical nature of life.
Garba is a dance that honors, worships, and celebrates the feminine form of divinity. The word "garba" comes from the Sanskrit word garbha, meaning "womb." Traditionally, the dance is performed by women in a circle around a clay lantern with a light inside, called a garbha deep ("womb lamp"). The garbha deep has another symbolic interpretation. The vessel itself is a symbol of the body, within whom divinity (in the form of the Goddess or Devi) resides. Garba is danced around this symbol to honor the fact that all humans have the divine energy of Devi within them. Today, it is common to have images of Durga at the center of the circle in lieu of the garbha deep.

Garba is performed in a circle (concentric circles when there are many people). The circle represents the Hindu view of time. In Hinduism, time is cyclical. As the cycle of time revolves, from birth to life to death to rebirth, the only thing that is constant is the Goddess, an unmoving symbol in the midst of all of this unending and infinite movement. The dance symbolizes that God, represented in feminine form in this case, is the only thing that remains unchanging in a constantly changing universe (jagat).

As garba is part of a religious practice, as with other Hindu rituals and worship, it is done barefoot (and on all kinds of surfaces). Going barefoot signifies respect for the earth upon which people walk. The foot is the body part that touches the earth – the sacred mother of all. The earth is imbued with generative powers and the foot is thought of as the conduit through which the vital energy of the earth travels through humans. Dancing barefoot is another way to connect with Devi.

Now you know the meaning behind garba—check back for more fun things to know about the celebration! For details about our free Garba360 event, click here >